The ABCs of ASEAN’s Economic and Banking Integration

In 2007, the ten member countries of the Association of Southeast Asian Nations (ASEAN) adopted the goal to achieve economic integration by creating an ASEAN Economic Community (AEC) by year end 2015. The AEC aims to shift ASEAN from ten fragmented economies to a single market of goods, services, and investment together with freer movement of skilled labor and capital. While the AEC will be officially established at the end of 2015, the goal of integrating the region’s banking sector and capital markets is not targeted for completion until the end of 2020. Financial integration within ASEAN has the potential to promote financial deepening and lower the cost of capital by creating a larger and deeper regional financial market.

Significant progress has been made with respect to banking integration. In December 2014, central bank governors of the ASEAN countries endorsed the ASEAN Banking Integration Framework (ABIF). The framework has three goals, namely facilitating the entry of foreign banks, eliminating discrimination against foreign banks, and streamlining banking regulations in the region. Under this framework, banks with “Qualified ASEAN Bank” (QAB) status will be able to sign reciprocal bilateral agreements to operate freely in neighboring countries and receive national treatment equivalent to that of local banks. These goals are grounded in ASEAN principles that emphasize inclusiveness, transparency and reciprocity. To ensure that these principles are upheld, integration will be supplemented by stronger cooperative and regulatory arrangements to ensure effective banking sector supervision.

Financial integration can also add to banking sector’s resilience and competiveness. As part of the process, a system of well-managed, integrated banks will be able to access a larger regional and international market. As ABIF policies are adopted across the bloc, healthy banks will be able to grow through regional mergers and acquisitions so that they can better compete in the global banking market.

Barriers to Integration and Possible Drawbacks

Although ASEAN had targeted full economic integration by December 2015, this goal will likely not be achieved due to differences in bureaucratic capacity between member countries stemming from their drastically differing levels of economic development. While ASEAN has made significant headway lowering tariffs, it will take time for roadblocks such as nontariff protectionist measures to be phased out. The Asian Development Bank, which monitors the progress of the AEC, estimates that a fully integrated economic union is realistically achievable by 2025. Similarly, ASEAN’s initial 2020 target for banking integration may be delayed by political and structural barriers. 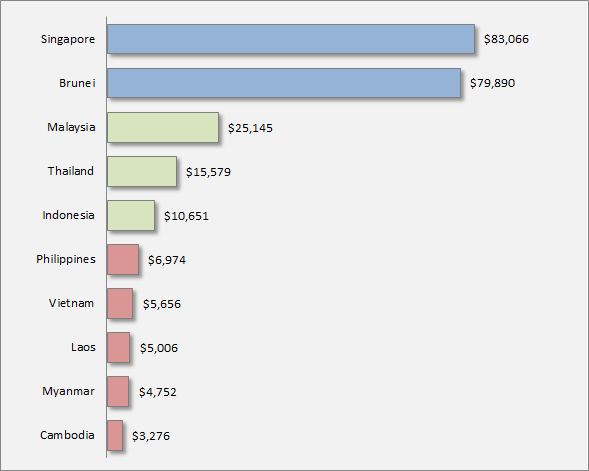 This is not necessarily bad news. Currently there are a high degree of heterogeneity in financial sector development and banking regulations among ASEAN countries. A domestic banking crisis in an individual ASEAN country with relatively weak financial system could easily spread via the contagion effect across in a fully integrated regional financial system. Since the risks of increased financial market volatility and cross-border financial contagion effects magnify with hasty integration, it may be in ASEAN’s best interest to wait for the banking sectors of less-developed member countries to mature before pushing for full integration.

Carefully planned integration is also necessary because of differences in banking sector performance. For instance, Indonesian banks have an average cost-to-income ratio of 80%, while most other ASEAN countries have ratios between 40% and 60%. Opening up domestic banking sector to regional competitors could pose significant challenges for Indonesian banks. From a financial regulator’s perspective, it may be desirable to give countries with less developed financial sectors a chance to improve efficiency and shore up capital, so that domestic banks are better able to compete with other regional players.

The IMF recommends that integration should be sequenced so that ASEAN countries in differing stages of development can adhere to different integration timelines. A commonly proposed solution is the “2+x” approach. Under this approach, two compatible countries with sound financial systems could take the first step and open their markets for each other’s banks. Additional member countries can join the countries that are already integrated as their own institutions mature. This would allow for experimentation on a smaller scale and could incentivize less developed countries to catch up. Although this plan would delay integration, it ensures that countries with more limited financial sectors can develop regulatory architecture and deeper markets before integrating.

While one of the end goals of ASEAN’s economic and financial integration is the creation of a single market linked by a unified banking system, large disparities in political and economic systems could delay the process. Much needs to be done post 2015 as ASEAN countries move towards convergence and integration on the back of strong economic growth and sound policies. Countries with more advanced institutions are expected to take the lead and test the waters in a way similar to the “2+x” approach. This would allow for proper sequencing and result in greater financial stability over the long run.

is an intern in the Federal Reserve Bank of San Francisco's Country Analysis Unit (CAU). She is pursuing her undergraduate degree in Business Administration and Economics at UC Berkeley.