By Nicholas Borst and Sean Creehan

One of the most striking trends following the global financial crisis has been the slowdown and retrenchment of cross-border lending. Due to financial distress, many large global banks, particularly those from Europe, had to reduce their international exposure and pull back funding to their home markets. This trend has led to worries that the global financial system was undergoing a period of “de-globalization” and fragmentation. The rise of cross-border credit growth in Asia, however, indicates a shift, not a stoppage, in global financial flows and the increasing importance of Asian banks.

The figure below shows the trends in cross-border lending, defined as bank claims on non-domestic borrowers, with data for individual countries’ banks aggregated into regional totals. International lending plummeted during the global financial crisis and in most regions global cross-border credit growth has remained low or negative. The glaring exception to this global trend is the Asia Pacific, which has grown by double digits since December 2009. 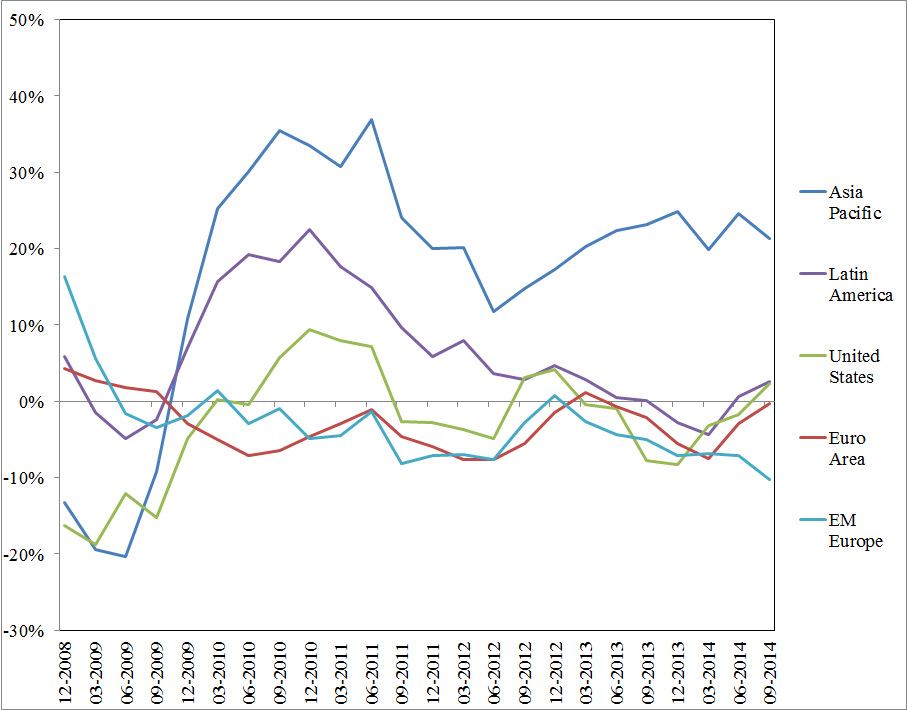 Much of the Asia-Pacific’s growth in cross-border lending has been driven by Japan, China and Taiwan. Banks in all three economies have focused on expanding within Asia to take advantage of the region’s rapid growth.

Japan: Over the past decade Japanese banks have rapidly expanded their overseas operations in pursuit of profitability. Japanese banks have now reclaimed a position at the top of Bank for International Settlements (BIS) cross-border claims tables they last held in the 1990s prior to Japan’s banking crisis. Today, Japanese banks’ international claims represent 13.3% of total international assets of BIS-reporting banks as of September 30, 2014, ahead of U.S., U.K., French, and German banks. While a large proportion of Japanese investment and lending goes to North America, an increasing share flows to emerging Asian countries like Thailand, Indonesia, and India.

This sustained overseas expansion has been driven by the competitiveness of Japanese banks, which enjoy historically low funding costs, combined with their desire to seek higher yields and non-interest income beyond the Japanese domestic market with its tight net interest margins and stagnant credit demand. Indeed, overseas expansion has allowed Japanese banks to increase their return on average assets despite tightening margins in Japan.

China: The cross-border expansion of Chinese banks started from a low base, but has subsequently grown rapidly, driven largely by China’s Going Out policy, which has encouraged Chinese companies to invest abroad and enter overseas markets. Chinese banks, in turn, have followed their customers to these new markets. Another factor driving international expansion is the growing use of the renminbi in offshore markets and trade financing. Chinese banks have set up operations overseas to act as clearing banks and offer offshore renminbi-denominated financial products.

Due in part to the growing international exposure of its banks, China is now the only emerging market economy with banks classified by the Financial Stability Board as global systemically important financial institutions, so-called “G-SIFIs.” In 2014, Industrial and Commercial Bank of China, China’s largest bank, had operations in 41 economies and handled $2.7 trillion worth of international settlements. The Bank of China has an even higher level of international exposure relative to its assets and handled the largest volume of cross-border renminbi transactions, more than RMB240 trillion ($39 trillion) in 2014. Chinese banks as a whole now operate in more than 50 economies and have overseas assets exceeding $1.2 trillion.

The other driver of Taiwanese banks’ international expansion is Taiwan’s growing connections to mainland China. Following agreements between Taipei and Beijing to reduce barriers to cross-strait banking in the late 2000s, Taiwanese aggressively moved into the mainland market. Taiwanese banks primarily serve Taiwanese enterprises operating in China as well as Taiwanese living in the mainland. China is now the largest single cross-border exposure for Taiwan, having surpassed the United States in 2014.

The international expansion of Asian banks is a mixed blessing. Cross-border lending can tie together the regional economy and promote business growth. At the same time, higher levels of international exposure increase the risks of financial contagion. These risks are heightened in the current environment given high levels of debt in many Asian economies and the possible volatility from U.S. interest rate normalization.

While much of the world is experiencing a contraction in cross-border credit, Asia continues to move in the opposite direction. Buoyed by economic growth and relatively unscathed by recent financial crises, Asian banks have taken advantage of their relative strength to expand abroad. If current trends continue, Asian banks may soon begin to rival their European and U.S. peers as the largest sources of international lending.