Sovereign wealth funds are special-purpose investment funds owned by a national government. Over the past decade, these funds have grown rapidly and now play an important role in the global financial system. This was particularly evident during the global financial crisis, when investment decisions by these funds had a large impact on global financial markets. The newfound prominence of sovereign wealth funds has led to calls for greater transparency and accountability and the establishment of best practice guidelines.

Asian sovereign wealth funds have been the subject of controversy both domestically and abroad. In their home countries, these funds are subject to high levels of scrutiny because they are viewed as the custodians of national resources. Corruption, losses, or even subpar returns typically attract negative media attention. When investing abroad, Asian sovereign wealth funds may fall under suspicion if their investments are seen as motivated by foreign policy objectives rather than economic considerations.

To allay these concerns, Asian funds have been active in establishing international guidelines for the conduct of sovereign wealth funds. The most well-known of these guidelines are the Santiago Principles. Created in 2008 through a joint effort between the International Working Group of Sovereign Wealth Funds (IWG-SWF) and the International Monetary Fund, the Santiago Principles offers 24 standards for fund conduct. These standards range from operational guidelines to disclosure and transparency. By adhering to these principles, sovereign wealth funds hope to persuade domestic critics that national assets are well-managed and foreign critics that investment decisions are based upon economic rather than political factors.

Many analysts have begun using the Santiago Principles, or modified version of these principles, as a benchmark to grade sovereign wealth funds. One of the more comprehensive rating methodologies is produced by the Peterson Institute for International Economics. Authors Truman and Bagnell periodically assess the transparency and accountability of major sovereign wealth funds and government pension funds according to 33 separate guidelines, 25 of which are from the Santiago Principles. 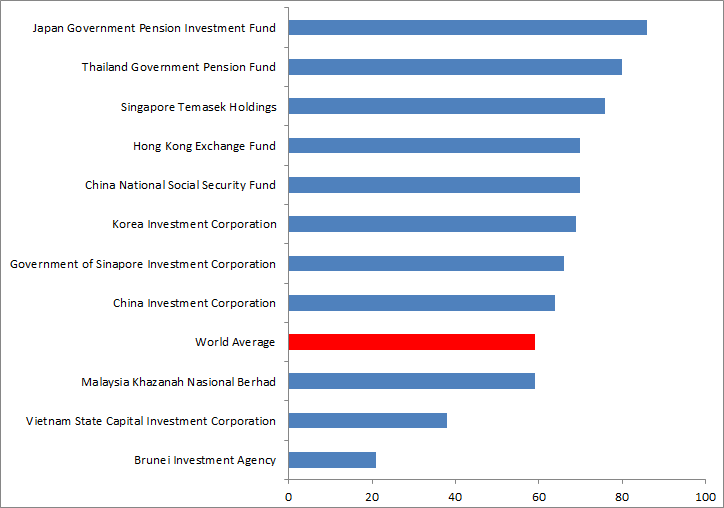 Compared to the global average for sovereign wealth funds and government pension funds, Asian funds perform well. Of the 10 largest funds, eight are above the global average. Only funds in Malaysia, Vietnam and Brunei perform below the average.

A full report on this issue was published in Asia Focus. Please see The Rise of Asian Sovereign Wealth Funds.