China’s New Normal Is in the Making

“China’s economy has entered a state of new normal – the gear of growth is shifting from high speed to medium-to-high speed,” said Chinese Premier Li Keqiang at the World Economic Forum in Davos earlier this year. Indeed, after two decades of double-digit growth, the Chinese economy is shifting into a lower gear. According to official statistics released earlier this month, the economy expanded at 7 percent in real terms in the second quarter of 2015. This appears to be consistent with many Asia-based analysts’ view that the economy appears to be stabilizing in the second quarter and growth rate will likely bottom out towards the end of the year. The IMF’s latest projections, however, suggest that economic growth may trend further down to 6.7 percent in 2015 and 6.3 percent in 2016, respectively. 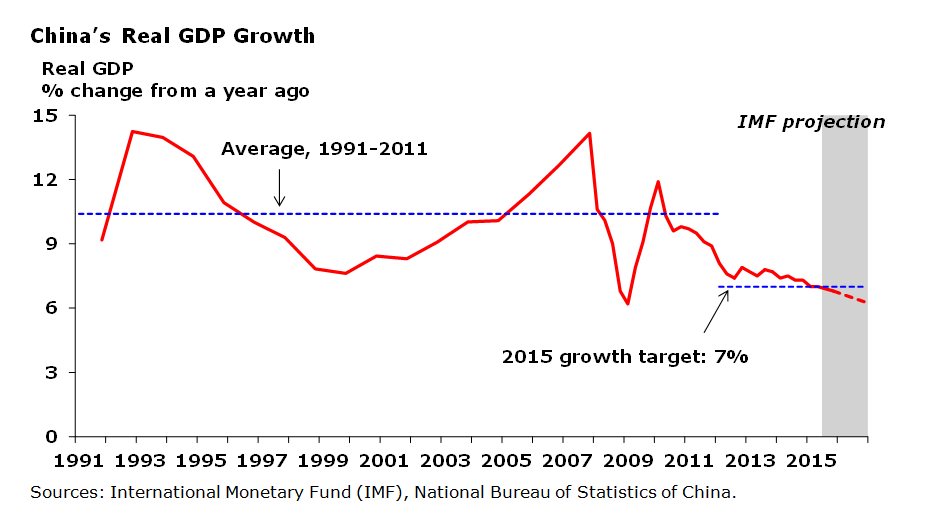 For those who have followed the Chinese economy closely, the ongoing slowdown should not be a surprise. No economy can grow at 8 percent forever and China is no exception. A break from double-digit growth is actually good news for the nation in the long run, as the current slowdown is a strong signal that the central government is serious about the structural changes needed to get the country on a more sustainable growth path to the ranks of high-income countries. Economists’ estimates of China’s potential GDP growth in the next decade vary widely, but most studies predict that potential growth around 2020 will be 6-7%. Changing demographics and slower total factor productivity growth are two main reasons behind the decline in forecasted long-term trend growth.

Still, trend growth is not the whole story. The ongoing slowdown partly reflects cyclical factors. Moreover, China is also experiencing growing pains associated with breaking away from its old growth and investment models. The government has a long list of planned structural reforms, which includes reducing the economy’s reliance on exports and investments, phasing out overcapacity industries, reforming the funding mechanism of local infrastructure projects, and many other initiatives. Every reform has an associated cost and progress often comes at the expense of slower economic growth, displacement of workers, and weaker corporate profitability in the near term. Some reforms will be harder to implement than others, but policy makers appear to understand well what needs to be done and are committed to bringing substantial, if gradual, changes to the economy.

The changing economic model will weigh on banking sector performance. As overcapacity industries are phased out, weaknesses are emerging on corporate balance sheets. In 2014, total nonperforming bank loans grew by 42 percent from the previous year. At the same time, Chinese banks have accelerated writing off bad loans. According to SNL data, the seventeen major commercial banks charged off more than RMB211 billion (US$34 billion) in 2014, more than double their total charge-off for 2013, RMB90 billion (US$15 billion). The level of “special mention” loans—debts bank monitor for potential future weakness—is also steadily rising, suggesting further weakening of credit quality down the road. As of Q1 2015, the overall nonperforming loan ratio for the banking industry still appears low at 1.39 percent, according to the China Banking Regulatory Commission. However, private sector analysts expect that asset quality will continue to be a concern in 2015 and 2016.

Uncertainties Will Be Here to Stay

The Chinese version of the “new normal” is still in the making. There remain many unknowns regarding the government’s possible approach to address slower growth. Market participants now face a challenge that is new to them—recalibrating their baseline forecast for China’s GDP growth amid ongoing reforms and an evolving policy environment. The good old days when everyone could rely comfortably on an 8 percent minimum growth rate are gone. Meanwhile, uncertainties will be here to stay as we settle into this Chinese version of new normal.