CIPS and the International Role of the Renminbi

The internationalization of the renminbi is one of the most significant developments in the global financial system in recent years. However, the renminbi’s role as a global payments currency is not commensurate with the size of China’s economy. China is the world’s second largest economy, but as Figure 1 shows, the renminbi accounts for less than 2% of international payment transactions. 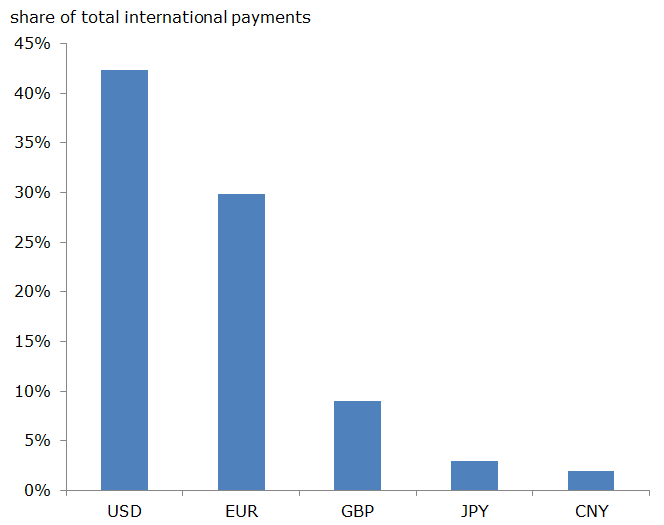 One of the main reasons for this discrepancy is the inadequacy of the infrastructure for cross-border renminbi payments. Cross-border payments are currently made via a patchwork of clearing hubs and correspondent banks. These payments are hindered by complicated routing procedures, the need to maintain multiple foreign correspondent accounts, liquidity shortages in some offshore RMB centers, different hours of operations between clearing centers, a lack of common standards between international and Chinese domestic payment systems, and China’s capital controls.

Despite these hurdles, the use of the renminbi as an international payments currency has continued to grow rapidly. In the first half of 2015, there were more than RMB 5.7 trillion (USD 866.7 billion) worth of payments made to and from China using the renminbi. Currently, around a third of payments between China and the Asia Pacific region are conducted using renminbi. These numbers are projected to increase substantially over the coming years due to the desirability for Chinese businesses to use their own currency for trade transactions.

The increased use of the renminbi has led to around RMB1.5 trillion (USD 231 billion) in offshore renminbi deposits, with the largest amounts in Hong Kong, Taiwan and Singapore, respectively. As more renminbi accumulate outside of China, investors will increase their demands for channels to repatriate funds back onshore.

China’s Cross-border Inter-bank Payment System (CIPS) seeks to address many of the existing problems facing cross-border renminbi payments. CIPS provides one-point entry by participants and a central location for clearing renminbi payments It allows participation by both onshore and offshore banks and provides direct access to China National Advanced Payment System (CNAPS). These features reduce the need for banks to navigate complicated payment pathways via offshore clearing hubs or through correspondent banks. This should result in faster payment processing and reduced costs for cross-border payments.

CIPS is a real time gross settlement system, meaning that banks settle payments immediately between each other on a gross rather than a net basis. This reduces credit risks that can arise in systems where payments are netted before settlement.

Payment messages sent within CIPS are written in both English and Chinese. This eliminates the necessity of translating messages into Chinese before they can be transmitted to CNAPS. CIPS utilizes the ISO20022 messaging standard, a widely used international messaging scheme for cash, securities, trade and foreign exchange transactions. CIPS will also utilize SWIFT bank identifier codes, rather than CNAPS clearing codes. These factors will allow CIPS to smoothly process payments flowing between offshore banks using SWIFT and mainland banks using CNAPS. As a result, cross-border payments made through CIPS should be able to achieve straight through processing.

CIPS operating hours will extend from 9:00am to 8:00pm Shanghai-time. This allows the system to overlap with business hours in Europe, Africa, Oceania, and Asia. Banks within these jurisdictions will be able to settle renminbi transactions during their business day. Though North and South America are not currently covered, the People’s Bank of China (PBoC) has stated that an expansion of CIPS’ operating hours is possible.

Details on plans for the future development of CIPS are sparse. Chinese officials have spoken of a Phase II for CIPS that will improve liquidity management and the efficiency of cross-border clearing and settlement. PBoC officials have also stated that Phase II will include longer operating hours, support for securities settlement and central counterparties.

The creation of CIPS is an important milestone on the renminbi’s road to becoming a major global currency. It has the potential to significantly improve the efficiency of cross-border payment transactions and increase liquidity in the offshore market. CIPS provides a more direct pathway for processing transactions, improving speed and lowering fees. Liquidity in the offshore renminbi market will be improved due to the large number of participating financial institutions and the direct link the system has with CNAPS.

The fact that the renminbi has progressed so quickly despite the underlying deficiencies in the payments infrastructure is a testament to the global demand for the currency. CIPS seeks to rectify these deficiencies and is likely to play a critical role in the renminbi’s future growth as an international payments currency.