As previously covered in Pacific Exchange, many Asian borrowers increased their U.S. dollar-denominated debt in recent years amid the extraordinarily low global interest rate environment. Recent volatility in global markets has been characterized in part by capital outflows from Asian economies where such debt accumulated, headlined by China, Malaysia, and Indonesia. While emerging Asia remains vulnerable to further capital flight with a majority of its external debt denominated in foreign currency, its bond issuances, which have driven a substantial amount of cross-border credit since the 2008 crisis, are largely in local currency. The further deepening of Asian bond markets combined with borrowers’ ability to issue bonds in their own currencies can insulate them from further volatility in currency and capital markets. Indonesia is going against trend, however, with a declining share of local currency bonds that warrants monitoring.

Data on total external debt levels typically releases on a lag—an ongoing issue that the G20 Data Gaps Initiative aims to resolve—and is not readily available for cross-country comparison for the most recent period, but the Asian Development Bank’s (ADB) data on Asian bond issuance does cover activity into the first quarter of 2015. The ADB data indicates that the vast majority of emerging Asia’s bonds have been issued in the currency of the local jurisdiction over the past decade, especially in China (see Figure 1). Indeed, recent analysis from the International Monetary Fund (IMF) indicates China’s issuance of local renminbi bonds has contributed to an increasing share of local currency bond issuance across emerging markets since the global financial crisis (and despite a substantial increase in foreign currency issuance in countries like Indonesia). The ability of Asian economies to tap bond funding in their own currencies reflects the continued development of their financial systems, attractive economic fundamentals, and perceived improvements in macroeconomic management. Combined with the extraordinarily low interest rate environment of the past decade, increased confidence in emerging Asia has led investors to emerging Asian local currency bonds. 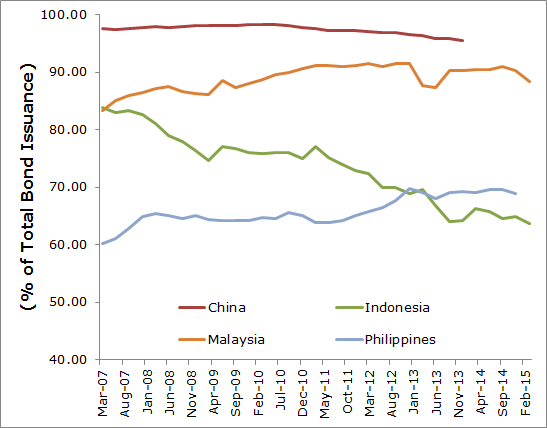 Deeper local currency bond markets offer other advantages to emerging Asia. The development of local bond markets diversifies funding for borrowers historically dependent on bank financing while also giving depositors an alternative savings vehicle. Emerging East Asia’s local currency bond markets represent roughly 58 percent of regional GDP as of March 2015, a reflection of their continued development, but also room for further growth. Developed Asian economies like Korea and Japan have local bond markets valued at over 100 percent of GDP, as do many other OECD countries. 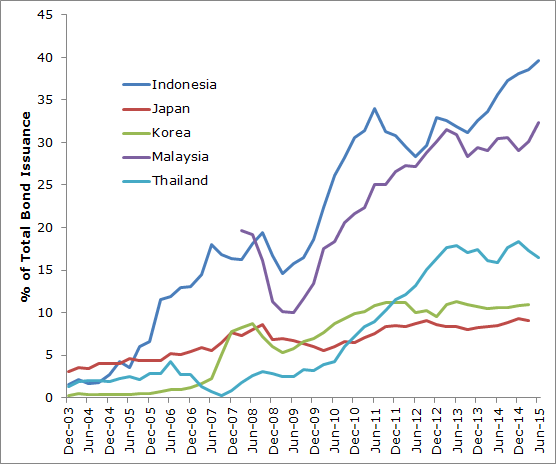