One of the functions of the Financial Sector Assessment Program (FSAP) is to issue a “report card” for an economy’s compliance with the Basel Core Principles for Effective Banking Supervision (BCP). Since the FSAP’s inception in 1999, many economies have undergone the assessment which is conducted jointly by the World Bank and the International Monetary Fund (IMF). The program was launched after the Asian Financial Crisis of 1997-8, and there are currently around 140 economies that have completed an FSAP assessment (many more than once.) Assessments are now mandatory for 29 jurisdictions with financial sectors that are deemed “systemically important”, i.e., those that have the greatest impact on global financial stability.

By way of background, the FSAP is administered jointly by the World Bank and IMF staff in developing and emerging market countries, and by the IMF alone in advanced economies. The program provides in-depth examination of a country’s financial sectors, and includes assessment of two components: financial stability and financial development. As part of the FSAP assessment, an FSAP team reviews compliance with BCP, which are based on the Basel Committee on Banking Supervision’s “Core Principles for Effective Banking Supervision” issued in 2006 and revised in 2012. There are 29 Basel Core Principles, which are a framework of minimum standards for effective supervisory practices and are considered universally applicable. The core principles focus on topics such as supervisory techniques and tools, risk management, corporate governance, capital adequacy, and financial reporting and auditing. Ratings are assigned to each of the 29 core principles; the ratings scheme is summarized below:

The figure below shows the breakdown of assessment ratings for these nine Asia-Pacific economies that have disclosed their BCP assessment results. 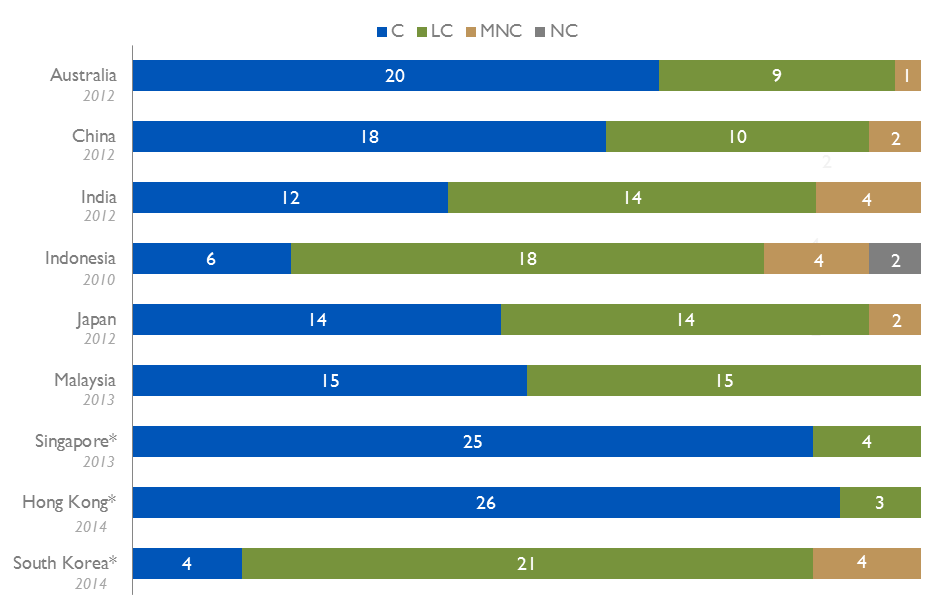 In summary, the FSAP includes an evaluation of a jurisdiction’s compliance with best banking supervisory practices. While arguably there could be some subjectivity involved in the assignment of ratings, the BCP review nonetheless serves as a good “report card” on the adequacy and effectiveness of each jurisdiction’s supervisory regime.

is an analyst in the Federal Reserve Bank of San Francisco's Country Analysis Unit (CAU). She monitors financial, regulatory, and economic developments in Asia with a focus on the ASEAN region. Her research interests include financial technology, peer-to-peer lending, private equity, and M&A.