The Global Impact of Chinese and Japanese Economic Growth

By Cindy Li and Sean Creehan

Three decades ago, Japan was growing so quickly that some exuberant analysts predicted it would overtake the United States, while China’s economy was small, largely closed, and only beginning to gain economic importance on the global stage. As Japan contributed a remarkable 16 percent to global GDP growth from 1960-1990, China added a mere 2 percent. Much has changed. China has overtaken Japan as the world’s second largest economy, accounting for 16 percent of global GDP in 2015 (see Figure 1). In a clear role reversal, from 1990-2014, China contributed over 17 percent to global GDP growth, with Japan adding just over 3 percent. However, as China shifts to a “new normal” of lower growth, observers are increasingly concerned that the country may no longer serve as the world’s economic engine. Meanwhile, proactive Japanese economic policy has renewed interest in Japan’s prospects. This post summarizes a recent discussion of these two economic powers and their global impact at a Federal Reserve Bank of San Francisco Asia Financial Forum in Seattle in early March (a link to the slide deck can be found at the end of this blog).

Figure 1: China and Japan’s Evolving Roles in the Global Economy 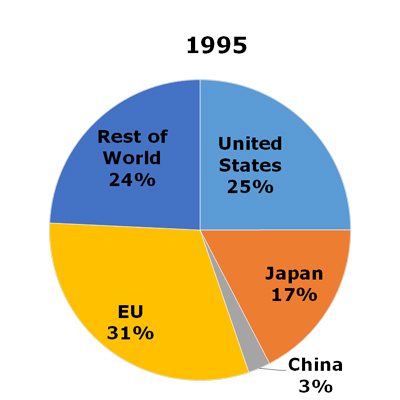 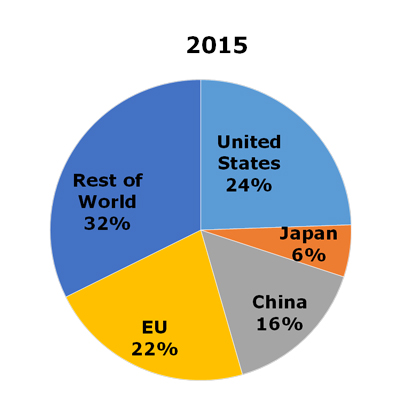 Accounts of Japan’s “lost decade” are well known, if a bit exaggerated based on essentially zero nominal GDP growth over the past 20 years. In fact, since 2000 Japan’s real GDP per capita has grown at roughly the same rate as the United States’ (see Figure 2). Accounting for GDP per working age person, Japan actually has had the highest rate of GDP growth among G7 countries since the year 2000 (1.5 percent from 2000-2010 and 2 percent from 2010-2015). Its challenge is largely centered around demographics. Japan’s economy has trouble growing with a workforce that’s been shrinking for two decades. It also lags in productivity compared to other countries—McKinsey estimates Japan’s productivity is some 30 percent behind the United States. The combination of lower productivity and a shrinking workforce makes slow GDP growth all but unavoidable for a developed country.

Figure 2: Japan’s Economic Performance is Better than You Think 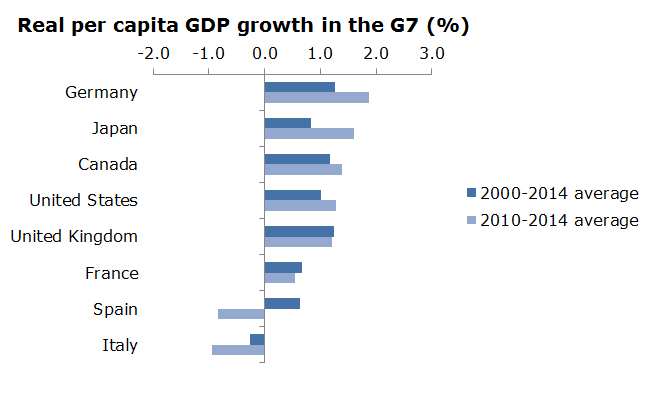 China faces its own demographic challenge—its working-age population peaked in 2011, meaning the aging population will weigh on long-term growth unless the government takes more significant steps to improve birth rates. In the medium term, however, rebalancing the economy will likely remain the overriding task. This entails a transition from an investment-led growth model to a consumption-oriented one and a larger share of economic output generated by domestic demand instead of exports, best illustrated by the divergence of different sectors’ economic performance in recent years (see Figure 3).

While the industrial (secondary) sector experienced a sharp slowdown in the past two years, the service (tertiary) sector posted stable growth. The contribution of investment to GDP growth plummeted to an estimated 21.5 percent in 2015, the lowest level in a decade. In contrast, domestic consumption held up well on the back of solid income growth, accounting for roughly two-thirds of GDP growth last year. Business sentiment for the service sector has also consistently outperformed that for the manufacturing sector over the past two years, according to both official National Bureau of Statistics and Caixin Purchasing Manager Indices. Rebalancing will likely cause short-term economic pain—including slower growth and temporary increases in unemployment—before it leads to sustainable growth in the longer term. 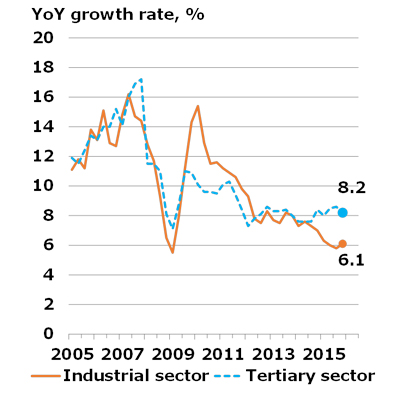 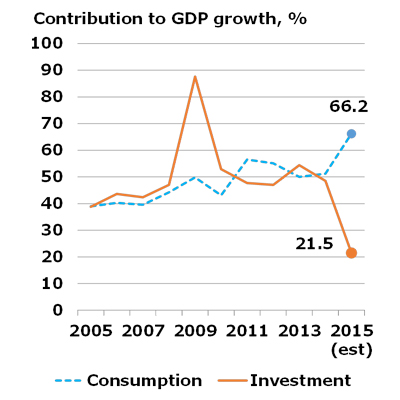 Will Japan’s Past be China’s Future?

Some aspects of China’s modern economy are reminiscent of Japan in the 1990s, especially high debt-to-GDP ratios and rising levels of problem bank loans. Nonetheless, a key difference between China today and Japan two decades ago is that as an emerging economy with rising household income, China can well expect its domestic demand to generate solid growth in years to come. Indeed, generating this demand is one of Japan’s continued challenges. Fortunately for China, even after its remarkable high-growth period, the economy can still enjoy plenty of catch-up development from further urbanization, an expanding service sector, and a broadening consumer base.

China and Japan’s Importance to Asia and the World

Asia’s two economic giants collectively account for two-thirds of the region’s output and roughly half of its trade, meaning their economic performance has an enormous impact on the entire region. China is now among the top trading partners for all major Asian economies. While a large portion of Chinese imports from the region are processed and re-exported to the rest of the world, China increasingly plays an important role as final consumer, especially in the case of commodities. China’s slowdown and shift away from an investment-led growth model has subsequently hit commodity exporters particularly hard. Compared to its strong trade linkages with the rest of the world, China currently plays a smaller role in global cross-border investment, especially portfolio investment, although rapid growth in these flows is expected as China gradually liberalizes its capital account.

Meanwhile, Japan remains a force in global trade and investment flows despite its stagnant domestic environment. In fact, the lack of domestic growth arguably leads Japan to play an outsized role in cross-border flows as foreign opportunities are more attractive for Japanese companies and investors. Japan is one of the top three trading partners for a majority of Asian economies (and first for countries like Indonesia and the Philippines). On the investment side, from 2011-2014 Japan had the second highest annual outflow of foreign direct investment in the world behind only the United States according to the latest United Nations World Investment Report (perhaps unsurprisingly, it was recently overtaken by Hong Kong, a hub of Mainland Chinese outflows). Further, as of 2013, Japanese banks re-took the lead in cross-border banking, a role they have not played in two decades.

At the moment, there are considerable uncertainties facing both economies. Spillovers from a deeper-than-expected China slowdown and weaker growth in Japan are two major risks that will impact Asian and global growth prospects in the coming years. The two countries face different challenges, but they have something in common. Both have recognized the need for structural reform to achieve stable and sustainable economic growth. In the case of China, these reforms involve greater reliance on domestic demand and consumption as a source of growth, more employment in the service sector, and improving productivity across the entire economy. For Japan, the Abe administration has prioritized a number of policies to stem the decline in the working age population (e.g. through increased participation of women and foreign workers) and to compel Japanese companies to invest more (or raise wages) instead of sitting on huge piles of cash. Both governments are moving into uncharted territory using a variety of tools—from monetary and fiscal policy to legal changes and cultural pressure—to push forward difficult reforms to alter the structure of the economy. While it is too early to judge their success, if they succeed, the rest of Asia will likely reap great benefits.