How Does China’s Slowdown Impact the United States?

Prior to the Global Financial Crisis, few observers saw China as a source of risk for advanced economies and global financial markets. Things are changing as China becomes the world’s second largest economy. The International Monetary Fund (IMF)’s April Global Financial Stability Report pointed out that “the impact of Chinese growth shocks is increasingly important for equity returns in both emerging market and advanced economies.” How big a concern is China’s slowdown for the U.S. economy? This blog reviews possible transmission channels. At least for now, the overall direct impact appears to be limited, although U.S. exposure to China is growing.

At present, U.S. investors’ direct exposure to China’s equity market is limited. U.S. investors held US$128 billion in Chinese stocks as of end-2014, 1.9 percent of their international equity portfolio (4 percent when adding Hong Kong stocks), or a mere 0.3 percent of their total equity holdings. China’s onshore equity market remains largely closed to foreign investors. Foreign investors can invest in China’s equity markets through the Qualified Foreign Institutional Investors (QFII) program, but approval is required for gaining access and the size of the program is relatively small.

One possible channel of spillover is that China-based investors may be forced to liquidate their U.S. securities to obtain liquidity when the Chinese capital markets are in turmoil. But Chinese investors do not own a large share of U.S. stocks either. As of mid-2015, investors from mainland China and Hong Kong collectively held US$408 billion in U.S. equity, which amounted to 6.2 percent of total foreign holdings of U.S. equity, or a little more than 1 percent of total U.S. equities.

Since U.S. direct equity market exposure to China is modest, how did Chinese equity market turmoil seemingly spill over to the U.S. market? There are several possible explanations. Although the S&P 500’s overall China revenue exposure is not significant, some prominent companies have substantial reliance on China as a revenue source. Moreover, a number of Chinese companies are listed and traded on U.S. stock exchanges. Perhaps most importantly, negative shocks from China serve to dampen global investors’ sentiment on the current state of emerging economies and the overall global economy.

A closer look at S&P 500 index (SPX) and Shanghai Composite Index (SHCOMP) suggests that the two markets are actually not highly correlated (Figure 1). Between 1996 and 2006, the correlation between SHCOMP and SPX fluctuated between -0.2 and 0.1. To put this number in perspective, correlations between the SPX and UK’s FTSE 100 Index and Germany’s DAX Index were much higher, averaging over 0.4 during the same period. SHCOMP does not appear to be highly correlated with major European market indices either. The most plausible explanation for the relatively low level of correlation is China’s restrictions on cross-border portfolio investment. China’s equity markets, despite being the second largest in the world, are also not yet included in MSCI’s Emerging Market Index, which heavily influences institutional investor flows (MSCI is considering China’s inclusion). 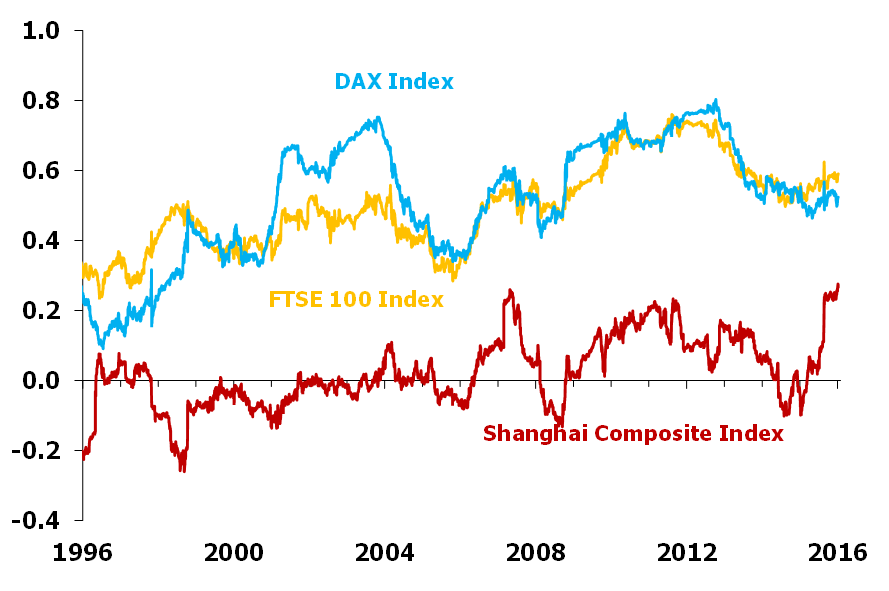 Although Chinese equity markets were relatively insulated from global markets until recently, global equity market correlations have generally increased since the Global Financial Crisis. The correlation between SHCOMP and SPX has increased notably after 2015, but is still well below the correlations between SPX and other major stock indices. The IMF recently concluded that “purely financial contagion from China remains less significant.” Meanwhile, China’s growing importance in the global economy and increasing integration into the global financial system will only increase its impact on foreign markets.

China’s importance as a U.S. debt securities investor is much greater. As of mid-2015, Chinese and Hong Kong residents collectively held US$1.7 trillion in U.S. debt securities (actual holdings may be even larger when accounting for offshore transactions). Of China’s $3.3 trillion in official foreign exchange reserves, the majority is estimated to be invested in U.S. securities.

China is the largest holder of U.S. Treasury debt. To the extent that China may need to sell U.S. denominated securities to curb capital outflows, it has the potential to significantly influence U.S. Treasury yields. A study in 2012 estimated that if foreign official inflows into U.S. Treasuries were to decrease in a given month by $100 billion, 5-year Treasury rates would rise by 40-60 basis points in the short run and by 20 basis points in the long run. Given the size of U.S. Treasury debt, currently 14 trillion held by the public, a small increase in Treasury rates can lead to a large increase in debt financing costs.

Bilateral direct investments may be smaller than you think 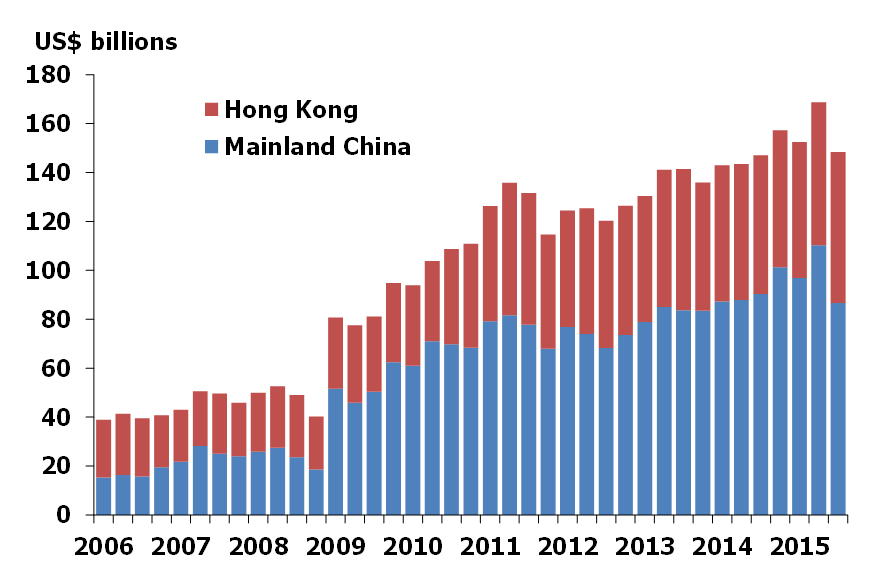 As one of the United States’ largest trade partners, China accounted for 21.3 percent of U.S. imports of goods in 2015. China’s share of U.S. exports of goods is much lower at 7.7 percent. However, China is among the fastest growing exporting markets for American companies, with U.S. merchandise exports to China increasing by 177 percent between 2005 and 2015. Washington, California and Texas accounted for the most exports to China (in dollar terms) in 2014, while Washington, Louisiana, Oregon, and South Carolina reported China as their number one export destination.

Slower economic growth and a weakening yuan in China translate into reduced demand for U.S. exports in the short term. However, over the long-term, if China succeeds in rebalancing its economy, U.S. producers will gain from an expanding Chinese consumer base. Clear evidence of this is the brisk growth in the exports of motor vehicles and electronic products in recent years.

Manageable impacts for now, but the exposure is growing

The analysis presented in this blog is focused on direct exposures. Indirect exposures are difficult to project, but one recent paper by two Banque de France economists suggest that unlike emerging markets, the U.S. economy is not overly sensitive to a negative shock from China even when taking into account indirect impacts over a long period. Taken together, the potential impacts of a China slowdown on the U.S. economy appear to be manageable for now. This may sound counterintuitive given the growth of the economic relationship between the two countries over the past several decades, but the United States ultimately depends on domestic demand as the major source of growth, and China’s capital markets are not yet widely open to foreign investors.

There are, however, important caveats. China’s holding of U.S. treasury bonds has systemic implications for the U.S. bond market, and certain geographic regions and industries in the United States may be disproportionately affected by slower business activity in China. Meanwhile, financial and real linkages between China and the U.S. are set to grow significantly in the coming years, making continuous monitoring of these exposures important and necessary.