India’s heavy reliance on cash has wasted resources and limited financial inclusion, leaving nearly half the population without a bank account. In response to this problem, the government has introduced policies to promote non-cash payments, provide hundreds of millions of new payment-capable accounts to the unbanked, and encourage new technology and innovation throughout the banking sector. These combined policies could have a major impact on economic welfare and financial inclusion in the coming years.

Most Indians rely exclusively on cash in daily transactions. Only an estimated 10-15 percent of the population has ever used any kind of non-cash payment instrument, compared to 40 percent of people in countries like Brazil and China. Meanwhile, as of 2014, India’s ratio of currency in circulation outside of banks to GDP was 11.1 percent, higher than other emerging economies like Russia, Mexico, and Brazil (see Figure 1).

This cash reliance makes households vulnerable not only to theft but also inflation, which erodes the value of cash not earning interest in a formal account. It also means their savings are unavailable to fund broader economic activity, as banks can’t lend cash held at home. Additionally, people operating exclusively in cash and without a bank account often face tougher borrowing conditions.

Figure 1: Cash and coins in circulation outside banks (% of GDP) 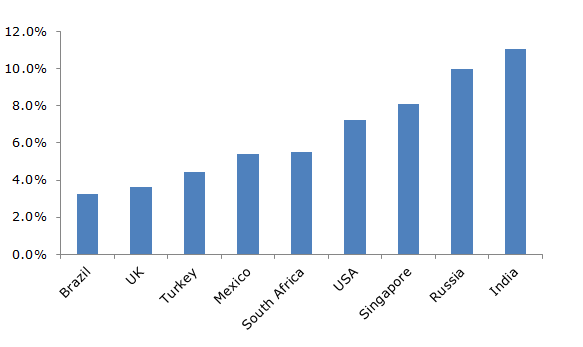 One way to reduce cash-related economic inefficiencies is to create inclusive non-cash payment systems. These systems provide benefits to a country’s poor citizens across a number of indicators, lowering the cost of transactions and increasing the return on savings. The availability of convenient, reliable, secure, and affordable payments can also introduce the unbanked to formal financial products like loans and insurance, creating synergies with broader financial inclusion goals.

India’s policymakers have taken steps to address these payment issues. In 2008 the Reserve Bank of India (RBI) established the National Payments Corporation of India (NPCI) to consolidate India’s complicated retail payment systems into a standardized, coherent national network to make transactions easier and cheaper. Since then, the NCPI has initiated multiple reforms, including a national automated clearing house system for payments, the RuPay electronic payment card scheme, the Immediate Payment Service (IMPS) for mobile transactions, national check truncation, and a continuously operational system for remittances (see Table 1). Meanwhile, the government’s rollout of universal identification cards—popularly known as Aadhaar cards and held by one billion Indians—lets any holder be authenticated by the Unique Identification Authority of India (UIDAI) and NPCI. This not only makes it easier for financial institutions to comply with “Know Your Customer” regulations, but also allows the payment system to support the government’s financial inclusion efforts.

Bringing the Unbanked into the Financial System through Payments

Having established a more robust national payment infrastructure, the Indian government and RBI have initiated policies to attract unbanked citizens to the financial system through payment-focused accounts.

Shortly after taking power in mid-2014, the government of Prime Minister Narendra Modi announced the National Mission for Financial Inclusion (Pradhan Mantri Jan-Dhan Yojana, or PMJDY) and instructed banks to leverage Aadhaar cards to provide unbanked citizens with new accounts and link them directly to welfare benefit payments. The program’s goal is to expand financial inclusion, but its initial strategy targets the provision of convenient payment products to attract India’s unbanked and, more importantly, get them to use their new accounts.

This strategy is most evident in the bundling of PMJDY accounts with the Direct Benefits Transfer (DBT) program, established in 2013 to send benefit payments (e.g. scholarships or pensions) directly to the poor in an effort to reduce the siphoning off of funds by corrupt intermediaries. PMJDY accounts can receive various government subsidies via the aforementioned Aadhaar Payments Bridge System. This bundling highlights the potential synergies of coordinated efforts to improve a country’s payment system and increase financial inclusion. DBT-enabled accounts offer benefits to the unbanked that attract them into the formal system. At the same time, a growing customer base of the newly banked creates positive network effects that make the payment system more useful for all participants (see Figure 2). 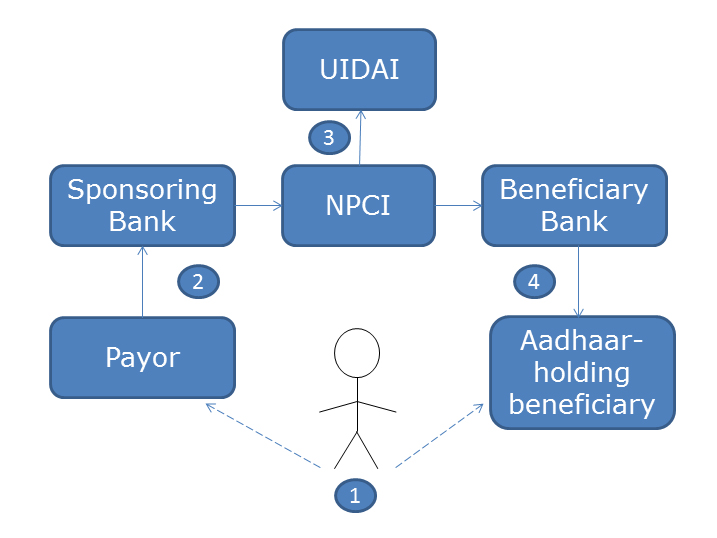 As of March 2016, the program had already opened 213 million new accounts, a remarkable achievement in under two years, but it remains a work-in-progress. Roughly 29 percent of accounts held a zero balance, in part because the government has not yet fully utilized the DBT program for all welfare payments. The infrastructure to support the new accounts is also still limited, making it less attractive for new PMJDY customers to make daily payments.

More recently, the RBI licensed new specialty payment banks in August 2015 to promote innovation in delivering payment services to India’s unbanked. The new payment banks are backed by five telecommunications ventures, a mobile payments specialist, three conglomerates, the National Securities Depository, and India Post. They have physical and virtual networks in the rural areas where many of India’s unbanked live as well as international experience promoting electronic payments. The RBI expects the payment banks will take advantage of their parent companies’ strength to leverage new technology and innovative strategies.

The payment banks will need to comply with RBI requirements to receive a full payment bank license. Deposits can be placed in checking or savings accounts and will earn interest. This solves the primary problem previously faced by non-bank mobile payment operators: an inability to let customers participate in these new payments networks without linking to a separate bank account.

The addition of these new players to India’s payment system also brings challenges. One open question is how payment banks will compete with the new PMJDY accounts. With more than 200 million accounts opened, many of the previously unbanked will now have access to formal payments and won’t necessarily need a payment bank account. For existing commercial banks facing asset quality problems and significant capital raising requirements, new competition poses risks to future earnings.

Payment operators will confront financial illiteracy and limited awareness among their customers, a common barrier to financial inclusion efforts around the world. The rapid rollout of new payment models also creates additional operational risks for the industry. The new players face an evolving legal environment in the treatment of customer privacy, with the Indian Supreme Court continuing to debate the extent to which non-government entities can leverage Aadhaar numbers to improve the speed and efficiency of payments transactions. Meanwhile, innovative business models have the potential to lead payment banks into unregulated areas, necessitating enhanced supervision by the RBI.

While 86 percent of transactions in India are still conducted in cash, the share of non-cash payments is likely to increase rapidly due to ongoing reforms. With a national infrastructure in place and undergoing improvement, hundreds of millions of new payment-capable accounts, and a variety of firms entering the sector, the promise of a modern non-cash payment system has arrived—and with it, potential significant advances in financial inclusion for one of the world’s most important developing economies.

A more comprehensive report on this topic was published in Asia Focus. Please see Modernizing the Payment System to Increase Financial Inclusion.