A half-year into the Bank of Japan’s experiment with negative interest rates, there are growing signs of unusual market activity in Japan, with yields on even long-term government debt going negative and ever-increasing overseas investment. Amid a breakdown in longstanding financial relationships that previously allowed international investors to hedge currency risk cost effectively, Japanese investors are increasingly funding their overseas portfolios with foreign currency debt to minimize foreign exchange risk.

With fewer and fewer growth opportunities at home, Japanese savers continue to invest overseas as part of a desperate search for yield. For many, even zero percent return—simple capital preservation—is preferable to the thought of negative rates. As Japanese government bonds at the 15-year maturity went negative for the first time on June 15 and with an estimated 78 percent of outstanding JGBs trading at negative yields according to analysis from JP Morgan, the risk-free rate for long-term savers is truly negative. The latest decline in rates came amid the United Kingdom’s vote to leave the European Union, although also in the context of new negative credit outlooks from rating agencies. On their own, negative ratings outlooks would normally increase yields, emphasizing the extraordinary nature of the current market environment.

One clear example of the investment trend is the pace of foreign investment by Japanese life insurers, who tend to be typical investors in domestic bonds given their long-term obligations and low risk tolerance. They have purchased foreign bonds at an unprecedented clip, with a modern record JPY 1.4 trillion (USD 13 billion) of purchases in March 2016 (see Figure 1). Equally notable, they are increasing the proportion of overseas bonds held without currency hedge given high costs of dollar hedging. These unhedged positions represent an unusual risk for investors typically known for conservativism. While investing in foreign assets is in part a reaction to broader government efforts to increase the risk appetite of Japanese asset managers—led by the Government Pension Investment Fund of Japan—it also reflects the dire domestic yield environment. 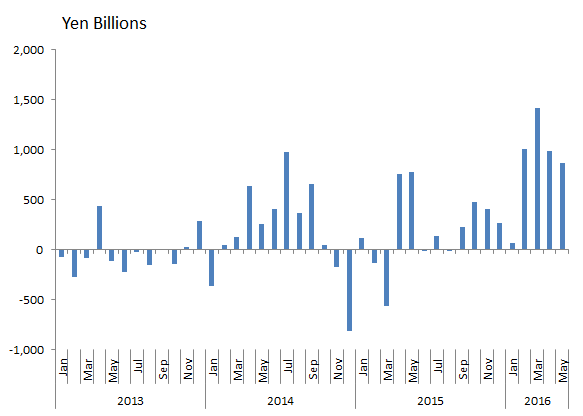 An uptick in overseas investment was expected given the new negative interest rate environment. What makes the recent trend noteworthy is that Japanese investors appear to be borrowing in foreign currencies to pay for these overseas assets. Typically, Japanese institutional investors have funded their overseas investment with yen and exchanged them for dollars using long-term cross-currency swaps. Indeed, most institutional investors will not purchase foreign assets without hedging foreign currency risk, given that their liabilities are largely priced in yen. For an insurance company, this liability is a future insurance claim; for a bank, it’s a deposit owed to corporate or retail customers.

Given abundant liquidity at home amid the Bank of Japan’s unprecedented easing scheme, one might expect Japanese investors to make this sort of trade in the face of negative interest rates, borrowing at lower Japanese rates and investing the proceeds in higher-yield overseas investments while hedging the future return against possible yen depreciation through foreign exchange swaps. While many investors may be conducting this trade, there has been a notable increase in foreign currency debt issuance, indicating an uptick in foreign asset-liability matching to reduce currency risk. As of early June, Japanese firms had already issued $52.6 billion in dollar debt (both overseas and in Japan) according to Bloomberg data, on pace to increase last year’s total by more than 50 percent. Data from the Ministry of Finance that tracks overall issuance of foreign currency debt overseas shows similar trends (see Figure 2). 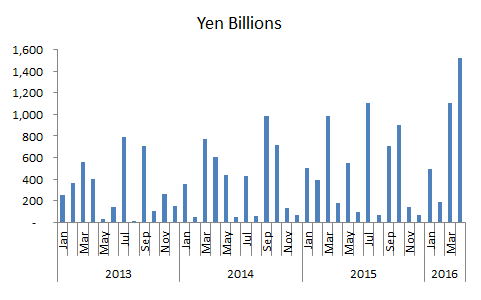 The new reliance on foreign currency debt is driven by the increasing cost of foreign currency hedging, particularly in a global environment where even relatively high yields in the United States are still low by historical standards. The low yield environment reduces margins that previously could absorb increases in hedging costs.

International financial theory—supported by a long history of empirical evidence—predicts that investors can borrow in their home currency to invest overseas while hedging currency risk at a cost equivalent to the benchmark lending rate in the foreign country. According to Covered Interest Parity, if a Japanese investor faces a higher implied rate to hedge dollars from a foreign exchange broker, other market participants will quickly eliminate the arbitrage opportunity by swapping dollars to the Japanese firm until the price difference is eliminated.

As the Bank for International Settlements noted recently, this classic economic relationship has broken down since the global financial crisis. Investors around the world are paying more to hedge their dollar investments than predicted by Covered Interest Parity (see Figure 3), with the yen showing the most extreme discrepancies. The explanations for this breakdown are complex, but one potential driver is the decreasing willingness of financial intermediaries to make markets in hedging instruments. 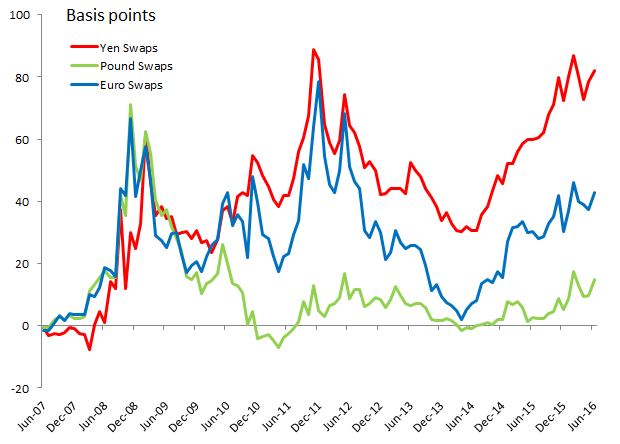 Where Japanese Investors Go from Here