Recently, the U.S. Energy Information Administration (EIA) and the International Energy Agency forecasted that crude oil inventories will rise for a third consecutive year. Persistent overcapacity, high inventories, a strong U.S. dollar, and uncertainties in the global economic outlook have had a substantial impact on the price of oil (Figure 1). 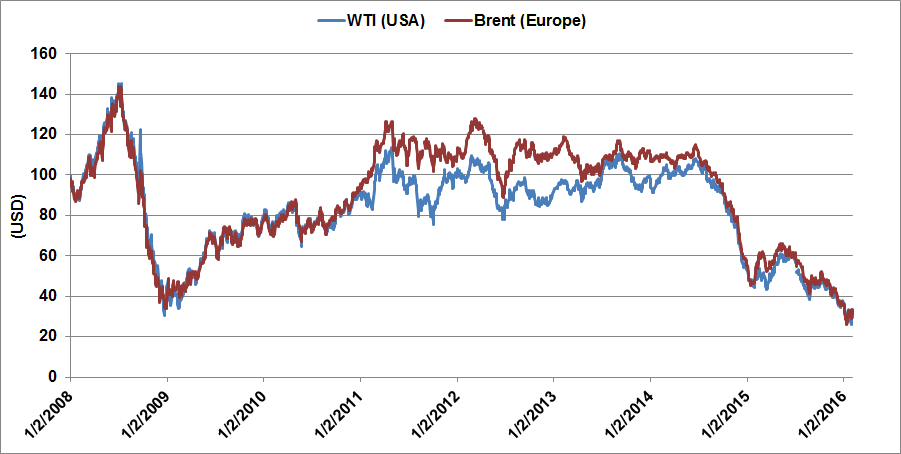 In response, major oil companies have reduced their capital expenditures, which led to significant losses for South Korea’s shipbuilders. Energy consultant Wood Mackenzie estimates that 68 oil and gas projects worldwide worth $380 billion have been postponed or cancelled since 2014 and more projects in the pipeline are likely to be cancelled. This reduced capital investment has lowered earnings for a range of companies engaged in energy infrastructure construction. Korean shipbuilders that specialize in deepwater oil and gas projects are among the hardest hit. In anticipation of further losses on their exposure to shipbuilders, Korean banks have been increasing their loan loss provisions to shore up their allowances and are reporting a considerable impact on earnings.

Shipbuilding has been an important contributor to South Korea’s economy since the 1970s and accounted for 7% of the country’s exports in 2015. Beginning in 2010, and in response to low-cost competition from Chinese firms, Korean shipbuilders implemented a strategy to move up the value chain and diversified into offshore oil rig construction. To gain market share, Hyundai Heavy Industries, Samsung Heavy Industries, and Daewoo Shipbuilding and Marine Engineering—Korea’s “Big Three” shipbuilders—gave clients favorable financing deals structured with low down and interim payments, and a balloon payment upon delivery (generally, shipbuilders are in the red on construction projects until the balloon payment is received).

These types of financing agreements are now a concern for shipbuilders. As oil prices started to tumble, an increasing number of clients—typically major energy companies—postponed delivery dates, missed interim payments, or refused delivery of nearly completed oil rigs. Since the average price of a deep sea oil rig is about $650 million, postponing delivery delays a sizable balloon payment to the builder. As a result, Korea’s Big Three are expected to post combined operating losses of $6.6 billion in 2015, which is substantially greater than the prior year’s already hefty losses of $1.6 billion. Although year-end 2015 data were not available at the time of writing, the gross profit margin for the Big Three averaged -9.7% and the net profit margin averaged -22.6% for the trailing twelve months ending September 30, 2015. On a side note, Korean shipbuilders are not the only ones that are suffering. Competitors in China and the rest of Asia have offered similar financing deals over the last few years. In December 2015, Zhoushan Wuzhou Ship Repairing & Building Co. became the first state-owned shipbuilder in China to declare bankruptcy in a decade. As excess vessel capacity drove down shipping rates, customers cancelled contracts with Chinese shipbuilders and according to JPMorgan Chase, about 140 shipyards in the world’s second biggest shipbuilding nation have gone out of business since 2010.

Government-owned policy banks including Korea Development Bank (KDB) and the Export-Import Bank of Korea (Exim) are the primary lenders to the Big Three. The importance of shipbuilding and offshore platform construction to the Korean economy means government support for shipbuilders and their lenders is highly probable over the next several years, including potential financial assistance in the form of debt restructuring, credit extensions, and capital injections. For example, in October 2015, KDB and Exim announced a plan to inject $3.7 billion into Daewoo Shipbuilding and Marine Engineering to recapitalize the shipbuilder. In the announcement, bank officials targeted a turnaround of the company by 2019, emphasizing that a bankruptcy would have a grave impact on the Korean economy.

As the financial condition of shipbuilders deteriorated, Korean banks increased their provisions for loan losses in 2015 to $10 billion from $7.8 billion in the prior year. This resulted in a significant decline in the average return on assets (ROA) to 0.16%, less than half the level of the prior year. Over the last several years the ROA was very low as Table 1 indicates. This is due in part to the low interest rate environment driven by the Bank of Korea’s easing of its policy rate (beginning in mid-2012) to a historical low of 1.5%. Further, the average ROA in 2013 is similar to 2015 as shipbuilders’ losses on ship construction projects lowered earnings. Korean banks still have ample capital buffers to absorb expected losses, however, with capital ratios well above Basel III capital standards. As of December 31, 2015, the average common equity tier 1 capital, tier 1 risk-based capital, and total capital ratios were 10.84%, 11.37%, and 13.92%, respectively.

Despite the enhanced provisioning, the banking sector has not seen a substantial deterioration in asset quality. As of December 31, 2015, the overall ratio of loans rated substandard, doubtful and loss (SBL ratio) was 1.71%. Notably, the ratios for KDB at 4.55% and Exim at 3.29% were much higher than the industry average due to their exposure to shipbuilders. Even with these asset quality problems, KDB’s and Exim’s regulatory capital ratios remain well above Basel III capital standards. Moreover, the Korean government has a legal obligation to guarantee the solvency of KDB and Exim.

The EIA predicts the global oil market will eventually become “relatively balanced” and a draw on inventories should occur by the third quarter of 2017 (Figure 2). Still, a number of geopolitical and economic events could influence the price of oil over the next few quarters. If the EIA’s forecast turns out to be accurate, capital investment is likely to recover, which will help boost revenue for Korea’s shipbuilders and stem further deterioration in banks’ earnings and asset quality. Until then, ample capital levels should keep Korean banks afloat during the current oil storm.

is an analyst in the Federal Reserve Bank of San Francisco's Country Analysis Unit (CAU). He monitors financial, regulatory, and economic developments in Asia with a focus on Northeast Asia. His research interests include asset quality, household debt, and liquidity.