By Nicholas Borst and Cindy Li

In many economies, having too few banks is a problem. Concentrated banking systems can reduce competition and lead to distortions as a handful of financial institutions become “too big to fail.” In Taiwan, however, the problem is the opposite. There are too many banks relative to the size of the domestic market, leading to excessive competition and low levels of profitability.

The current situation can be traced back to decisions made during Taiwan’s financial reform period in the late 1980s and early 1990s. Prior to that, Taiwan’s banking sector was predominantly state-owned and the government exerted significant influence over the allocation of capital through administrative measures on bank lending and regulation of interest rates. The reforms passed during this period permitted the creation of private banks and deregulated interest rates. As a result, the banking sector transformed from a market dominated by a few state-owned banks to one featuring a wide variety of private, semi-private, and state-owned banks.

These moves significantly increased competitive pressure within the Taiwanese banking system. Normally, such pressure would lead to consolidation within the banking industry as more successful banks grow larger and acquire smaller rivals. However, the decision to only partially privatize many of the state-owned banks meant that banking consolidation was limited. Instead, competition has often veered in unhealthy directions as banks compete fiercely over deposits and profitability for the industry has sometimes declined to unsustainable levels.

The lack of consolidation among banks after Taiwan’s financial reforms has resulted in a banking system that is much less concentrated compared to other economies in the region. Figure 1 shows banking concentration ratios, measured by the top five banks as a share of total banking assets, for several of Asia’s largest financial systems. As the chart shows, Taiwan has the lowest concentration ratio in the group. 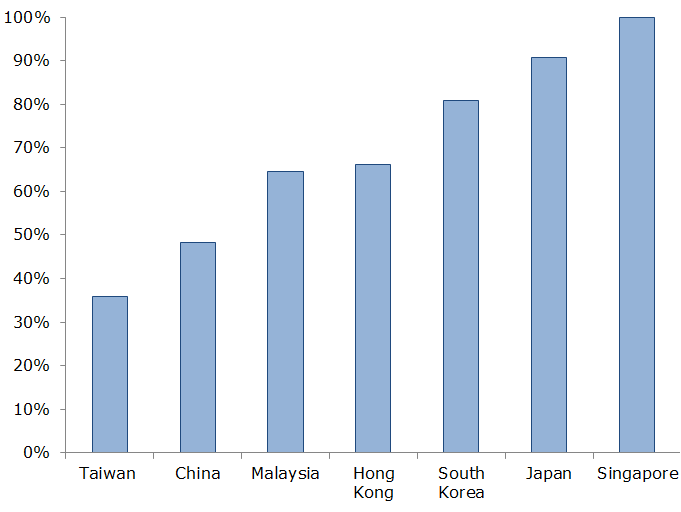 Source: SNL, Central Bank of the Republic of China (Taiwan)

Taiwanese authorities are well aware of the issues stemming from an overcrowded banking sector. To address the problem, they have focused on two major policy initiatives: promoting bank mergers and encouraging the international expansion of Taiwanese banks.

Promoting bank consolidation is a long-standing goal of the Taiwanese regulators and has recently received renewed emphasis. Between September 2004 and October 2015, the Taiwanese banking industry saw 52 bank mergers and the number of domestic banks shrank from 49 to 39. However, many of these mergers were relatively small in size and have done little to reduce fragmentation in the banking industry.

To facilitate additional mergers, authorities have recently made amendments to the Banking Act and the Financial Institutions Merger Act. The amendments removed some of the legal and regulatory barriers to consolidation and reduced the costs of mergers. Although these measures will undoubtedly make mergers more attractive, significant barriers remain to large-scale consolidation of the banking sector. Forcing consolidation among the government-controlled banks is difficult due to political opposition and resistance from labor unions. A more likely outcome is mergers between private banks.

A second strategy to combat the overbanking problem is to encourage banks to expand their overseas operations. The logic of international expansion is that, given the overcrowded nature and limited profitability of the domestic market, expanding overseas will allow Taiwanese banks to enter new and more lucrative markets. Overseas markets offer access to new customers and reducing the need for Taiwanese banks to engage in unhealthy competition over the relatively small pool of domestic customers. Also, banks that expand their presence overseas often have the opportunity to earn higher net interest margins from their lending activities.

The results of Taiwan’s push for banks to expand overseas are notable. Overseas banking assets have grown rapidly in recent years. As of the end of 2015, Taiwanese banks had 131 branches and 38 representative offices overseas, with the largest concentration in mainland China. Foreign operations now also account for a sizable portion of the income of Taiwanese banks. In 2014, the profits of offshore business units (OBUs) and overseas branches expanded by 53 percent and 36 percent, respectively. Figure 2 shows that together these entities accounted for 37 percent of total bank profits. 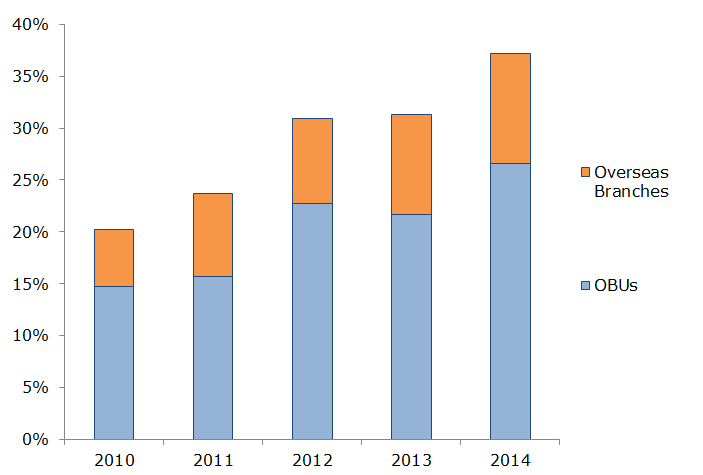 Source: Central Bank of the Republic of China (Taiwan)

The principal barrier to achieving a healthier financial system in Taiwan is an overcrowded domestic banking sector. The lack of consolidation within the banking industry has prevented banks from achieving economies of scale, leaving banks with thin operating margins and low returns on assets. Taiwanese authorities are seeking to overcome these problems by promoting mergers between banks and encouraging them to expand overseas. The success of these efforts will be crucial to the long-term financial stability of the Taiwanese banking sector.