What’s Behind the Slowdown in Asian Cross-Border Lending?

The recent growth in cross-border lending in Asia has been a striking trend. Between 2008 and 2014, the cross-border claims of Asian banks against non-financial borrowers increased by nearly 200 percent, compared to roughly 3 percent growth of all global claims. However, as shown in Figure 1, that trend has abruptly slowed in recent quarters. The growth rate in the third quarter of 2015 was around 1 percent, down 20 percentage points from a year ago. What explains the rapid decline in growth of cross-border borrowing in Asia? 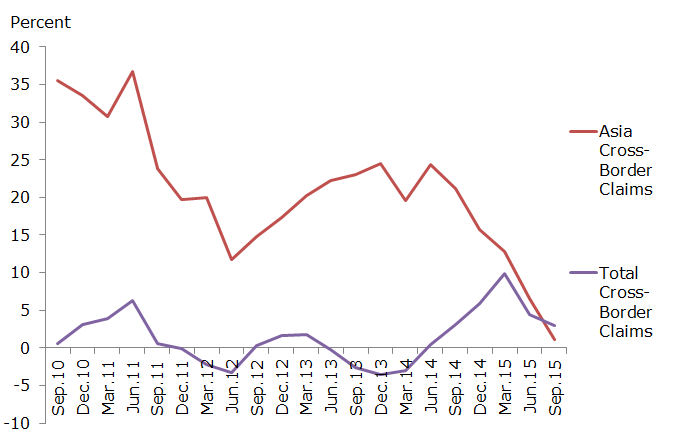 Despite a slowdown in cross-border claims, Asian banks are lending more to domestic borrowers. As Figure 2 shows, local credit claims, lending by banks to borrowers within their own country, have grown at double digits in annual terms over the past four quarters. 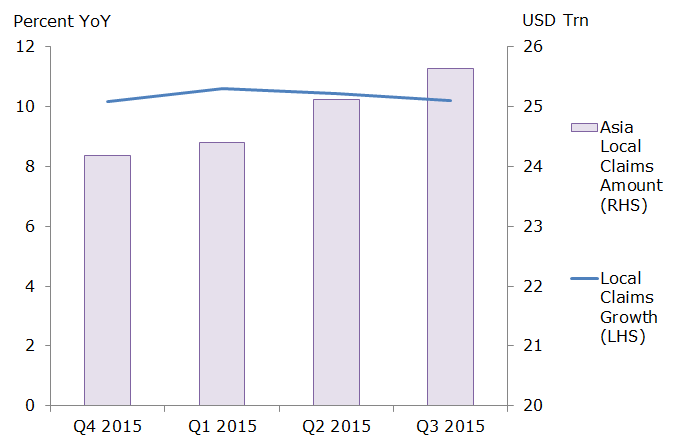 What’s behind the deceleration in cross-border credit flows in the region? The slowing economy in many Asian countries would normally make banks less willing to extend credit. However, the continued growth of domestic claims shows that banks are still lending at a rapid clip at home.

It may be the case that when times get tough, banks will stop lending to foreign customers first. There is some evidence that during periods of financial stress, internationally active banks are quicker to reduce cross-border lending than domestic lending. The drop in cross-border lending may then be a leading indicator of a more general decline in credit in the future.

There is another possible explanation that is less worrying. In a recent interview, People’s Bank of China Governor Zhou Xiaochuan stated that Chinese companies are trying to mitigate the impact of U.S. dollar appreciation by replacing foreign debt with domestic debt in order to reduce the real burden of foreign currency loans. China’s net international investment position shows a $241 billion decrease in foreign loans during the Q3 2014 to Q3 2015 period. Paying off foreign loans was a contributor to the significant decrease in Chinese foreign exchange reserves over the past year. During this period, Chinese domestic lending continued to grow rapidly, indicating that at least some foreign debt was being converted into domestic debt.

Other Asian borrowers may be following similar strategies. The U.S. dollar plays a significant role in Asia’s cross-border lending and the dollar accounts for more than half of the nearly USD 1 trillion worth of bond debt that must be repaid by Asian companies during the next four years.

Repayment of this debt is motivated by the depreciation of Asian currencies against the dollar. As Figure 3 shows, the slowdown in cross-border claims has coincided with a depreciation of most major Asian economies versus the dollar. 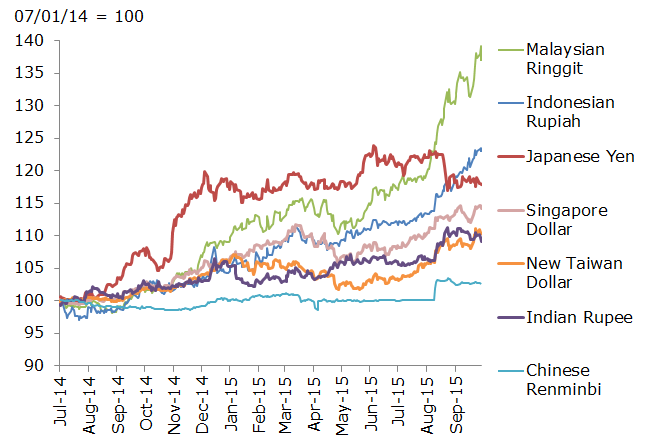 Faced with a growing real debt burden, Asian borrowers are reducing their exposure to dollar denominated debt. In broad terms, it is an unwinding of the carry trade that proliferated in recent years when emerging market currencies were appreciating and the economic growth differential between Emerging Asia and the U.S. was larger.

Given the persistent strength of the dollar, cross-border lending in Asia may continue to slow. Rather than signaling a broader credit slowdown or a retrenchment of Asian financial integration, it may only represent a short-term strategic move by borrowers to reduce debt servicing costs. However, like the shifting direction of capital flows in Asia’s financial centers, this trend is a reminder that cross-border financial flows tend to be volatile and are sensitive to changes in exchange rates.