What Is the Value of Bank Output?

The financial sector was at the center of the recent financial crisis, but it is surprisingly difficult to answer even basic questions about exactly what banks and other financial institutions produce. The crisis highlighted the need to understand the role of financial institutions in the economy, which requires good measurement of financial output. This Economic Letter focuses on one particular challenge—that financial institutions often do not charge explicit fees for their services. As a result, it is hard to properly measure the dollar value of bank output, let alone their actual services. In particular, banks are often paid implicitly by charging borrowers relatively high interest rates while paying depositors relatively low rates.

A natural approach is to somehow impute the value of implicit financial services from the spread between the lending and deposit rates, which is categorized on financial institution income statements as net interest margin. But how much of this spread should be used? In determining gross domestic product, the national accounts of the U.S. Commerce Department’s Bureau of Economic Analysis (BEA) generally use the entire net interest margin. In contrast, recent research argues for including only a part. Counting all the net interest margin in the value of bank services inappropriately lumps together conceptually distinct activities. Services that help in allocating and distributing funding, such as screening and monitoring borrowers or processing payments, are different in kind from risk-related returns. An economically grounded modification to the accounts would measure the value of bank output as the first—the direct services provided in bringing borrowers and lenders together.

For example, suppose that two banks devote the same resources, such as employees and computers, to evaluating borrowers, but one chooses to hold a riskier portfolio of loans. The riskier bank is likely to earn a higher return to compensate for that added risk. But there is no reason that this choice of risk should lead to higher imputed output, as the national accounts would do. Indeed, in the case of nonbanks such as mutual funds, the national accounts do not currently count risk-related returns as the provision of a financial service.

What determines the mortgage rate?

To illustrate the issues more concretely, we focus narrowly on the services provided by banks to borrowers in one market—residential mortgage loans. The conceptual issues with mortgages illustrate broader challenges that arise in measuring flows of financial services, such as what goes into the mortgage interest rate that a bank charges. 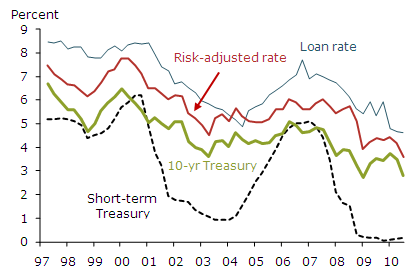 The top line in Figure 1 shows the average mortgage rate received by U.S. banks on the mortgages held on their balance sheets. The figure also plots the 10-year U.S. Treasury yield. These two rates display similar movements over time because mortgages are typically paid back in about the same number of years as longer-term Treasury securities. On the other hand, the mortgage rate is consistently higher than the 10-year Treasury rate. This difference arises mainly for two reasons.

First, mortgages are riskier because the payment stream may differ from what the investor expects. Homeowners might default or repay earlier than expected. We can measure the risk premium associated with this uncertain payoff using financial securities with the same risk and duration as the mortgages held by banks. Figure 1 plots an estimate of this “risk-adjusted” rate by Basu, Inklaar, and Wang (2011) using yields on traded mortgage-backed securities (MBS) with the same risk and maturity profile as the mortgages. Not surprisingly, this rate systematically exceeds the 10-year Treasury rate.

Second, the average mortgage rate paid by borrowers still systematically exceeds this risk-adjusted yield because of the costs of originating and servicing mortgages. Banks or other financial intermediaries must provide a host of services, including credit screening, home appraisal, and documentation, in order to channel funds from investors to homebuyers and then send interest and principal payments back to investors. A mortgage borrower typically pays directly for some, but not all, of those costs. The spread between the interest rate the borrower pays and the corresponding risk- and duration-adjusted yield is the implicit compensation for such services.

Wang, Basu, and Fernald (2009) and Basu, Inklaar, and Wang (2011) argue that this spread between the mortgage rate and the corresponding risk-adjusted yield should be used to measure the nominal value of bank mortgage services not explicitly charged to the borrower. This removes the risk-adjusted opportunity cost of funds from total interest income received by banks. To understand the logic, consider a bank that wants to hold a portfolio of assets with particular risk and duration characteristics. It can easily do so by holding a package of traded MBS. Replicating that portfolio with actual mortgages requires considerable work and requires costly offices, computers, and staff time. The spread between the mortgage rate the bank receives and the corresponding risk-adjusted rate the bank could have earned on securities compensates the bank for the cost of the mortgage services it provides.

The BEA follows the same principle of using an opportunity cost of funds for measuring the value of nominal bank services. However, the BEA considers the opportunity cost for bank loans to be a short-term, risk-free rate. In other words, if the bank held a portfolio with just short-term U.S. Treasury securities, it would generate zero imputed lending services. The estimate of the short-term risk-free reference rate in Figure 1 is the yield on a 3-month U.S. Treasury bill, which closely tracks the BEA’s risk-free rate for mortgages. The margin between the loan rate and the reference rate is the BEA’s imputed spread on bank services that, when multiplied by total loans, yields the value of nominal bank output implicitly charged for.

The core difference between the BEA and Wang et al. is how the opportunity cost of funds for banks is measured. The BEA’s use of a short-term, risk-free rate is straightforward to apply. However, the Wang et al. approach recognizes that, when a bank makes a loan, it is foregoing a menu of alternative investments that differ in risk and duration, not just short-term Treasuries. For measuring the lending services performed by a bank, the natural opportunity cost is an investment with the same risk characteristics, including duration.

The Wang et al. approach therefore avoids several undesirable features of the BEA approach. First, the yield spreads between long-term and short-term Treasury securities tend to move systematically over the business cycle—high during downturns and low during booms. Figure 1 shows sizeable variations over time in the spread between long-term rates and the 3-month Treasury yield. The BEA methodology mechanically translates these systematic cyclical fluctuations into the imputed nominal value of bank output, since bank loans have relatively long durations. Similarly, any other time variation in market risk premiums would inappropriately show up in the BEA measures. 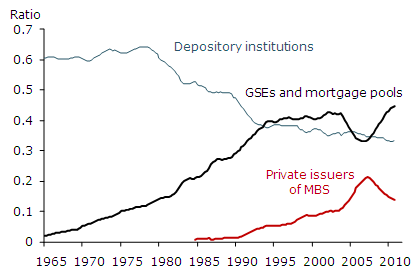 Second, the BEA approach leads to inconsistencies among different ways of financing loans, perhaps most notably in whether loans are held on bank books or securitized, that is, packaged into marketable securities. Figure 2 shows that, since the 1970s, an increasing share of home mortgages have not been held on the books of depository institutions. Instead they are sold to and securitized by government-sponsored enterprises such as Fannie Mae and Freddie Mac, and, especially in the 2000s, private nonbank financial institutions. As Ashcraft and Steindel (2008) show, under securitization, borrowers continue to pay a higher mortgage rate than is ultimately received by MBS holders. The spread compensates various service providers that perform the same bundle of services that would otherwise be supplied by banks.

If the bank held the mortgage, then the BEA would measure its nominal services using the entire spread relative to a short-term risk-free reference rate, including the term and risk premiums. In contrast, if the mortgage is securitized, only the service fee, such as the typical half percentage point to servicers, remains part of bank output. The additional term and risk premiums paid to MBS holders are not considered payments for a financial service.

The national accounts thus treat risk and duration inconsistently across the financial sector. This inconsistency leads to suspect estimates of the overall output and contribution of the financial sector, and has increased as a result of financial innovation. For example, measurement inconsistencies have made it harder to assess the rise of the so-called shadow banking system in recent decades (see Pozsar et al. 2010).

The same inconsistencies associated with mortgages also apply to nonmortgage intermediated funding such as commercial loans and have likewise been exacerbated by financial innovation (see Wang et al.). Therefore, if we want a measure of bank output that is consistent across evolving financial sector institutional arrangements, we need either to remove risk premiums from bank imputed service margins or include them in the output of alternative financing channels. Wang et al. and Basu et al. show how the former, more modest of these two methodologies can be implemented. 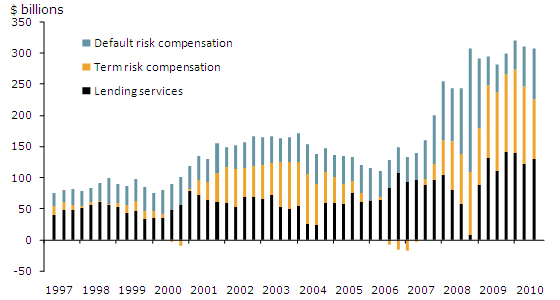 Figure 3 updates estimates from Basu et al. on the value of bank lending service output. Consider what it tells us about the financial crisis and recession. The authors show bank output (bottom black bars) falling steeply at the start of the financial crisis. Output recovered slowly in the following quarters, in part because commercial banks resumed performing activities that had previously moved to the shadow banking system. These data are consistent with anecdotal evidence and are conceptually what we would expect during a financial crisis. In contrast, the BEA’s measurements, which represent the sum of bank services plus the two previously described components of risk compensation (yellow and blue bars), imply that bank services expanded robustly after the beginning of the crisis. This is the mechanical result of skyrocketing risk and term-premiums which more than offset the sizable drop in actual borrower services.

Measures of the nominal value of loan services, especially mortgages, can be improved by using more accurate and consistent standards, such as risk-adjusted reference interest rates. Other challenges in measuring financial services output include calculating real lending services, and measuring real and nominal services to depositors (see Wang et al.). Ultimately, the goal is to develop measures of financial output that make it easier to study the impact of the financial sector on real economic outcomes.

Titan Alon is a research associate in the Economic Research Department of the Federal Reserve Bank of San Francisco.

John Fernald is a vice president in the Economic Research Department of the Federal Reserve Bank of San Francisco.

Robert Inklaar is an assistant professor at the University of Groningen.

Christina Wang is a senior economist in the Economic Research Department of the Federal Reserve Bank of Boston.