Long-term Unemployment: What Do We Know?

U.S. labor market conditions reached a low point in late 2009 and early 2010. Since then, the nation’s economy has added 4¾ million payroll jobs and the unemployment rate has fallen by over two percentage points, from 10.0% in October 2009 to 7.8% in December 2012. At the same time though, the average duration of unemployment rose from about 28 weeks to a peak of nearly 41 weeks in late 2011. Since then, it has dropped only slightly, to 38 weeks. Persistently high unemployment duration in the face of an improving labor market raises the possibility that a significant share of current joblessness is structural, or essentially permanent, in nature.

Estimates of unemployment duration are based on data from the Current Population Survey (CPS), a monthly survey of 60,000 households conducted by the U.S. Census Bureau for the Bureau of Labor Statistics (BLS). The CPS is the source of official labor force statistics, such as the unemployment rate. Individuals who are identified as unemployed—that is, people without a job who are actively seeking work, or on temporary layoff—are asked to report the number of weeks they have been unemployed. Their responses provide information on the length of unemployment spells, or unemployment duration. 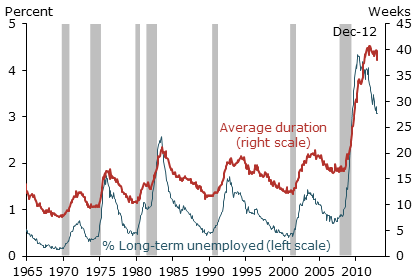 Figure 1 shows that, while average duration has remained very high, the incidence of long-term unemployment has fallen significantly since early 2010. This apparent disconnect reflects several key trends over the past few years. Job losses have declined substantially since the peak of the recession. That means a reduction in the number of people who are newly unemployed, whose durations are by definition short. The decline in the number of the short-term unemployed tends to increase the average duration of unemployment. Meanwhile, job creation has remained sluggish. As a result, people who have been out of work a very long time represent a rising share of the unemployed. For example, the unemployment share of those who have been out of work 99 weeks or more rose from about 6% in late 2009 to 14% in late 2012. This shift towards very long-term unemployment also tends to increase average duration.

At the same time, as average duration has risen, job losses and the overall unemployment rate have declined. This general improvement in the labor market over the past few years has reduced the absolute number and labor force share of both the long-term and short-term unemployed, even as average duration for the pool of unemployed individuals increases.

Who are the long-term unemployed? 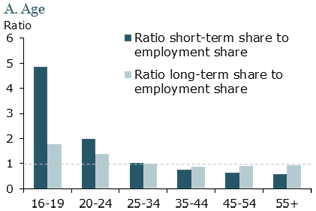 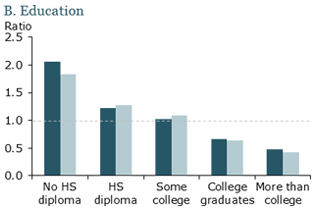 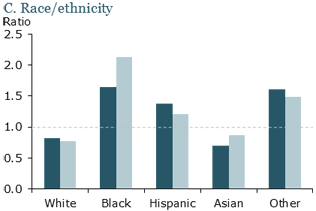 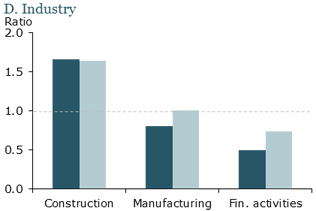 Figure 2 uses CPS data for the 12 months of 2012 to look at unemployment duration according to the age, education, and race/ethnicity of the jobless, and for three selected industrial sectors: construction, manufacturing, and finance. Unemployment duration is divided into short-term, that is, individuals who have been seeking jobs for six months or less, and long-term, those seeking jobs for more than six months. Each group’s incidence of short-term or long-term unemployment is tabulated and expressed relative to the overall share of civilian employment for that category. A number above 1 indicates that a category is overrepresented relative to its share of overall employment. If particular groups of workers are less likely than average to find jobs within six months, they will have higher relative long-term unemployment shares than short-term shares.

For each category in Figure 2, the first bar represents that category’s share of short-term unemployment relative to its overall employment share. The figure confirms some well-known patterns. Short-term unemployment is most frequent among younger workers, the less educated, nonwhite workers other than Asians, and people who previously worked in construction.

Job-finding prospects for the long-term unemployed

A key concern about the long-term jobless is that they may face unusually weak job prospects that will keep the unemployment rate elevated even after the economy has regained the ground lost in the recession. To explore this issue, this Letter looks at job-finding rates for unemployed individuals using CPS micro-data matched across consecutive months. Procedures are followed as outlined by Rothstein (2011) to correct the data for potential reporting errors that may overstate unemployment-to-employment transitions. Suspect transitions are those followed by a return to unemployment in the month immediately following, which suggests random reporting errors. However, the results are similar when uncorrected data are used. 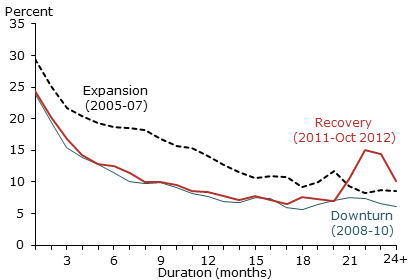 Figure 3 displays job-finding rates over different time horizons for the pre-recession years of 2005–07, the recession and its immediate aftermath in 2008–10, and the ongoing labor market recovery period of 2011 through October 2012, the latest available month of matched, corrected data. Job-finding rates are calculated for each month of unemployment duration. The chart illustrates the well-known phenomenon that job-finding rates decline as unemployment duration lengthens. Such a pattern implies that the long-term unemployed face greater obstacles to finding jobs than the short-term unemployed, which holds in economic expansions as well as downturns. The 2008–10 and 2011–12 lines generally lie below the 2005–07 line, which suggests that job prospects have declined substantially across the duration spectrum since the recession began.

At the same time though, job-finding rates in each period are largely flat for durations beyond about 12-15 months. Moreover, after about 15 months, job-finding rates since the recession have not been substantially different than during the pre-recession period of 2005–07. For the longest duration groups, those out of work for 20 months or more, job-finding prospects appear to have improved since 2010. These results suggest that the long-term unemployed are able to find jobs at rates similar to the past. Importantly, that finding implies that the current elevated level of long-term unemployment is likely to disappear over time (see Elsby et al. 2011).