Why Are Housing Inventories Low?

Inventories of homes for sale have been slow to bounce back since the 2007–09 recession, despite steady house price appreciation since January 2012. One probable reason why many homeowners are not putting their homes on the market is that their properties may still be worth less than the value of their mortgages, which would leave them owing additional money after a sale. In other cases, homeowners may simply be hoping that house prices will continue to rise, allowing them to recover lost equity.

As the housing market heats up and prices rise once again, existing home sales remain stuck at relatively low levels. The National Association of Realtors reports that some 4.5 million homes were sold in June 2013 at a seasonally adjusted annualized rate, roughly the same as at the end of the 1990s. Why have sales been so sluggish? Potential homebuyers frequently say very few homes are available for sale. This Economic Letter examines the factors influencing the inventory of homes available for sale and considers why they currently appear unnaturally low.

Inventory levels over the business cycle

How many homes are available for sale at any given time? Economic theory suggests that all homes are for sale if the price is right. But at any point in time, the price may not be right. Sellers must form expectations about what an acceptable sale price might be. Moreover, putting a home up for sale and getting a good price can be costly. Sellers routinely make home repairs and renovations, hire a real estate agent, and even rent new home furnishings in order to “stage” the house, that is, make it more attractive to buyers. For all of these reasons, economists typically regard the act of listing a house for sale as a strong signal of the homeowner’s intent to sell. For that reason, we measure the short-run supply of homes, or the inventory, by the number of homes available for sale according to a listing service.

No matter what the condition of the economy might be, some base level of inventory for sale always exists in the housing market. Young homeowners may sell their homes in order to relocate for a job or because their family has gotten larger and they need more space. Older homeowners may sell because they no longer need so much space or they want to turn their housing investment into cash as they reach retirement. All these reasons for selling can be thought of as life-cycle motives not necessarily tied to the business cycle. Such noncyclical factors produce a general level of churning in the housing market. Nevertheless, inventories show a distinct cyclical pattern, rising in good times and falling in bad times. This could be due to the cyclical nature of credit conditions. The risk premiums charged by lenders and their willingness to accept loan applications tend to ease during good economic times, allowing more potential buyers to enter the market. At the same time though, the level of house prices is by far the most important cyclical variable that influences the inventory of homes for sale. 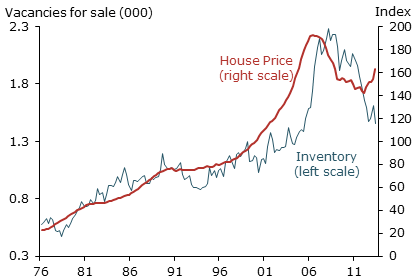 Figure 1 shows the inventory and price level of vacant homes for sale as reported by the Census Bureau. These data are not an exact measure of total homes for sale since many properties on the market are still occupied. However, this data series has a long history indicating the relationship between inflation-adjusted house prices and inventory for sale. As the figure shows, inventories generally move with prices. Formal statistical tests indicate that changes in house prices have a causal effect on inventories and the two series are tied together in a long-run relationship. This makes sense. All else equal, rising house prices should make homeowners more willing to sell and inventories should rise.

This adjustment of inventories to house price changes may not be instantaneous. Moreover, other economic forces may disrupt the long-run relationship between inventories and house prices. In Figure 1, such a divergence is evident in the most recent time period. House prices have been recovering broadly since 2012. But house inventories have been generally declining. Only in recent months have inventories of homes for sale begun to rise.

The inventory-price correlation at the county level

Why did the inventory-price correlation break down for an extended period when the housing market was rebounding in 2012? Fallout from the housing boom and bust seems to have played a role. A remarkable feature of the boom was the unprecedented rise in homeownership rates. Younger households became more willing or more able to buy homes (see Doms and Krainer 2007). Lending terms and conditions eased substantially, allowing less creditworthy borrowers into the market. These trends went into reverse during the housing crisis and the homeownership rate has fallen. With fewer households purchasing houses, inventory has shifted from the for-sale to the for-rent category. Figure 2 shows the changes in the for-sale and for-rent categories since 2009, based on data from the Census Bureau and Zillow, a real estate services company. The inventory variables are scaled by total units to facilitate comparisons across markets. 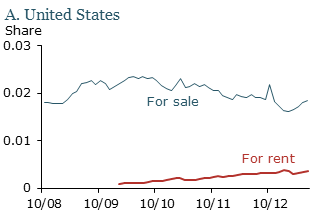 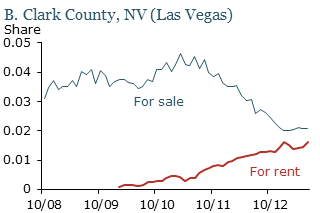 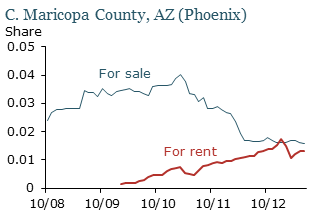 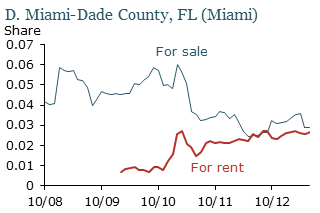 Two important points emerge from Figure 2. First, in the aggregate U.S. data, the for-rent inventory of homes as a share of total housing units has risen steadily during the recession and the recovery, while the for-sale inventory has steadily dropped and is now stabilizing. The data do not extend far enough back to indicate whether this is typical over the economic cycle. But other sources, such as Census Bureau aggregate inventory data, suggest that the drop in owner-occupied units relative to renter-occupied units is unprecedented since the 1960s. This phenomenon is widespread. The surge in foreclosures during the housing bust cannot be the only cause of this shift. The inventory of houses in foreclosure has recently been falling in most markets, but the ratio of owner-occupied units to renter-occupied units has remained at its lower level. Thus, either preference for homeownership has shifted or, more likely, credit constraints have affected household home purchase decisions (see Gropp, Krainer, and Laderman 2013).

A second point illustrated in Figure 2 is that the changes in for-sale and for-rent inventories are seen most dramatically in markets where foreclosure rates were high and where investors are now reportedly playing an important role in home sales. Indeed, in markets such as Las Vegas, Miami, and Phoenix, the total inventory of homes for rent is approaching that of homes for sale. This is a remarkable shift that has continued throughout the recovery, not just most recently when prices have been rising and inventories have failed to respond. Still, the impact of investors in these markets should not be overstated. The decline in homes for sale is very closely linked with the large downward shift in the homeownership rate in these markets. It is impossible to say though whether declining sales are pushing down homeownership rates or falling homeownership is pushing down sales, or both are interacting with each other in a complicated feedback process.

As noted earlier, tight credit conditions may be affecting homeownership decisions of young buyers. It is also possible that the availability of credit is affecting the supply side of the market. A sharp drop in prices was one of the defining features of the housing bust. In theory, falling house prices alone may keep some homeowners from selling. It may seem logical that decisions to sell should be based only on information about current and future market conditions. But David Genesove and Christopher Mayer (1997) show that homeowners take more time to sell their houses if prices have fallen since the original purchase. That is, two similar homeowners experiencing similar housing market conditions will behave differently if one of those homeowners has an unrealized loss on his or her house.

Falling prices may hold down home sales for several reasons. If house prices fall far enough to push a homeowner underwater so that the market value of the home is less than the value of the mortgage, then the owner may be unwilling or unable to realize this loss and choose to delay a sale. In this case, the homeowner may be locked into the house because a sale wouldn’t provide enough cash to make the down payment on a new home. 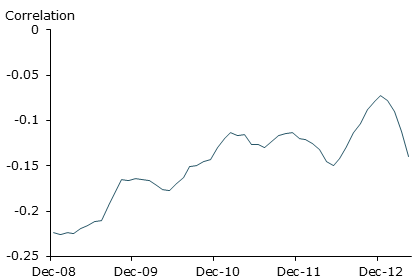 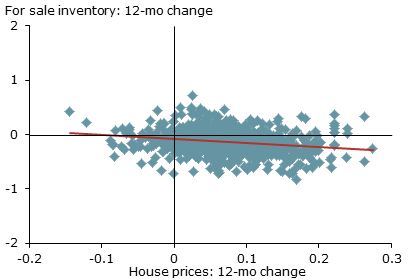 Figure 3 plots the correlation between the share of mortgages underwater in a county at a given point in time and the share of total units for sale averaged over a quarter in that same county. Homes for sale are scaled by total units to facilitate cross-county comparisons. Since early 2008, homes for sale and mortgages underwater have been negatively correlated. Counties with higher shares of mortgages underwater tended to have lower inventories. Though this relationship is significant, its strength diminished as the recession ended and the recovery got under way. Underwater borrowers may have been locked into their houses in a way that impaired the normal functioning of the housing market. But that effect seems to be waning.

Another possible explanation for the breakdown in the normal relationship between prices and inventories of homes for sale is that homeowners may be taking a longer-term view of the housing market. It is well documented that house price changes are persistent, meaning that price rises are likely to be followed by more rises, and price drops by more drops. Homeowners with flexibility on the timing of their home sales can potentially take advantage of this persistence. If they observe prices going up, they may want to wait and gamble that the increases will continue, allowing them to sell later at a higher price.

It turns out that variables such as recent house price appreciation and changes in employment are the most robust predictors of recent changes in housing inventory. In other words, once we account for changes in house prices and employment in a county, other variables, such as changes in the for-rent inventory, the underwater share, or local price-rent ratios, do little to explain the inventory of houses for sale. Thus, current homeowners may be making a rational choice to postpone selling in the hope that prices will rise further. However, this behavior tends to be short run. In the longer run, the link between the level of house prices and for-sale inventories is strong. If prices continue to rise, inventories for sale should eventually rise too.

History shows a long-run relationship between house prices and the number of houses available for sale. Thus, current inventories of homes for sale are low given more than a year of house price appreciation. County-level data suggest that many homeowners are waiting for prices to rise further in their markets. Markets that have seen the strongest house price appreciation and job growth are the ones where for-sale inventories have declined the most.

William Hedberg is a research associate in the Economic Research Department of the Federal Reserve Bank of San Francisco.