Why Is Wage Growth So Slow?

Despite considerable improvement in the labor market, growth in wages continues to be disappointing. One reason is that many firms were unable to reduce wages during the recession, and they must now work off a stockpile of pent-up wage cuts. This pattern is evident nationwide and explains the variation in wage growth across industries. Industries that were least able to cut wages during the downturn and therefore accrued the most pent-up cuts have experienced relatively slower wage growth during the recovery.

One explanation for this pattern is the hesitancy of employers to reduce wages and the reluctance of workers to accept wage cuts, even during recessions, a behavior known as downward nominal wage rigidity. Daly and Hobijn (2014) argue that this behavior affected the aggregate relationship between the unemployment rate and wage growth during the past three recessions and recoveries and has been especially pronounced during and after the Great Recession.

This Economic Letter examines whether the effects of wage rigidities over the recent recession and recovery can also be seen across industries. In particular, we consider whether industries with higher or lower degrees of wage flexibility have seen different evolutions of wage growth and unemployment. Our findings suggest that industries with the most downwardly rigid wage structures before the recession have seen the slowest wage growth during the recovery, conditional on changes in unemployment. In contrast, industries with fairly flexible wage structures have seen unemployment and wage growth move more closely together. These findings provide cross-industry evidence that downward nominal wage rigidities have played an important role in the modest recovery of wages in recent years.

Downward nominal wage rigidities are a well-documented feature of the U.S. labor market (see, for example, Akerlof, Dickens, and Perry 1996 and Card and Hyslop 1996). With that in mind, Daly and Hobijn (2014) introduce a model to illustrate how such rigidities can affect the relationship between unemployment and wage growth. Downward rigidities prevent businesses from reducing wages as much as they would like following a negative shock to the economy. This keeps wages from falling, but it also further reduces the demand for workers, contributing to the rise in unemployment. Accordingly, the higher wages come with more unemployment than would occur if wages were flexible and could be fully reduced.

As the economy recovers, the situation reverses and the pressure to cut wages dissipates. However, the accumulated stockpile of pent-up wage cuts remains and must be worked off to put the labor market back in balance. In response, businesses hold back wage increases and wait for inflation and productivity growth to bring wages closer to their desired level. Since it takes some time to fully exhaust the pool of wage cuts, wage growth remains low even as the economy expands and the unemployment rate declines. Daly and Hobijn (2014) show that this mechanism causes a bending of the wage Phillips curve—the curve that characterizes the relationship between unemployment and wage growth.

Figure 1 shows that the bending of the Phillips curve in our model matches the data for the United States during the Great Recession and subsequent recovery. This same pattern has held in the past three recessions (Daly and Hobijn 2014). The figure shows the relationship between wage growth on the vertical axis, measured as the four-quarter moving average of the four-quarter growth rate of wages and salaries in the employment cost index, and the 12-month moving average of the unemployment rate on the horizontal axis. The figure covers the period from the first quarter of 2008 through the third quarter of 2014. The arrows show the path of the observations over time, and the size of the dots is proportional to the fraction of workers that report no wage changes over the past year. 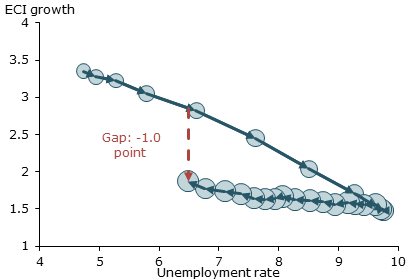 Rigidity and wage growth across industries

If downward nominal wage rigidities are an important explanation for recent slow wage growth, we should see differential effects across industries. Although all industries have some rigidity in wages, the degree of rigidity varies greatly. Figure 2 shows the difference between two industries most affected by the Great Recession: construction and finance, insurance, and real estate (FIRE). The figure plots the 12-month moving average of the share of workers who had their wages fixed over the last year—the standard measure of wage rigidity taken from the FRBSF Wage Rigidity Meter.

Figure 2
Share of workers with frozen wages over past year 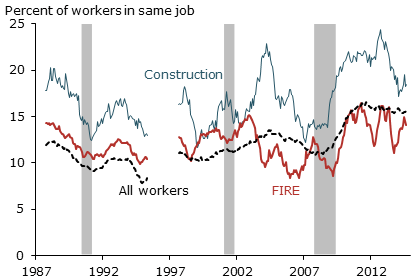 As the figure shows, both industries have some degree of frozen wages that move up and down over the business cycle, just like the national data. However, the level in the construction sector is almost always higher than in FIRE. In fact, with the exception of the late 1990s, the fraction of workers with their wages fixed from one year to the next, zero change, is substantially smaller in FIRE than in construction.

The question for our analysis is whether such sectoral differences can further illuminate the relationship between wage growth and unemployment during the Great Recession and subsequent recovery. To examine this we turn again to the wage Phillips curve. Figure 3 shows the wage Phillips curves for the construction and FIRE sectors for 2008 through 2014. As in Figure 1, wage growth in each sector from the employment cost index is on the vertical axis and the industry-specific unemployment rate is on the horizontal axis. The arrows show the path of the observations over time and the size of the markers reflects the share of workers that report no wage change over the past year. 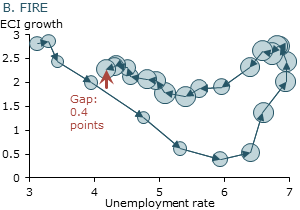 Comparing the two shows that large wage stagnation in the construction sector changed the relationship between wage growth and labor market slack relative to the FIRE sector. More rigid wages in construction created a bend in the curve, consistent with the theory. This bend represents the fact that, while wage growth slowed when the unemployment rate rose, it has moved little as unemployment has declined. More specifically, although the 12-month moving average of the unemployment rate in the construction sector has declined from 20.9% in mid-2010 to 9.5% in the third quarter of 2014, wage growth has risen only 0.6 percentage point over the same period and currently stands at 1.4% per year.

One way to assess how much construction deviates from the normal relationship between unemployment and wage growth is to consider what wage growth was in construction at a comparable level of unemployment during the labor market downturn. This difference is shown in the figure as the red dashed line, which indicates that the most recent wage growth is 2.3 percentage points lower than at the beginning of the recession. This gap is a measure of the degree to which the wage Phillips curve is bent.

The relationship between the shape of the wage Phillips curve and the level of the pre-recession wage rigidities for construction and FIRE is indicative of a pattern that holds across the 15 major private industries for which we have wage growth data, shown in Figure 4. The figure plots the size of the wage growth gaps (vertical axis), which we used in Figure 3 to measure the degree of bending of the curve, in the third quarter of 2014 against the degree of wage rigidity in 2007 (horizontal axis). The figure confirms what the theory implies: Sectors where wages are more downwardly rigid are the ones with the largest bends in their wage price Phillips curves.

Figure 4
Wage rigidities and the bending of the Phillips curve 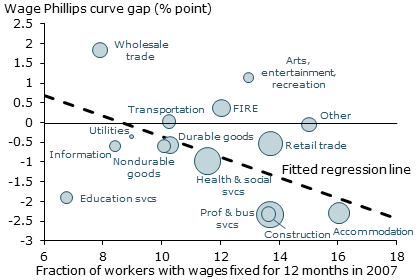 Importantly, this relationship between the level of wage rigidity and the degree of curve bending across industries is statistically significant. The dashed line plots the fitted regression line for this relationship, with each industry weighted by its size in terms of number of payroll employees. Cross-industry variation in the level of wage rigidity in 2007 accounts for 60% of the variation in the bending of the wage Phillips curve across sectors in this weighted regression. This industry-level evidence is consistent with the idea that the reluctance of employers to cut wages during the downturn has had a significant impact on the dynamics of wage growth and unemployment during the recovery.

National and cross-industry evidence shows that pent-up wage cuts reflecting downward nominal wage rigidities have been an important force during the Great Recession and subsequent recovery. The rigidity of wages in a number of sectors has shaped the dynamics of unemployment and wage growth and is likely to continue to do so until labor markets have fully returned to normal.