The Elusive Boost from Cheap Oil

The plunge in oil prices since the middle of 2014 has not translated into a dramatic boost for consumer spending, which has continued to grow moderately. This has been particularly surprising since the sharp drop should free up income for households to use toward other purchases. Lessons from an empirical model of learning suggest that the weak response may reflect that consumers initially viewed cheaper oil as a temporary condition. If oil prices remain low, consumer perceptions could change, which would boost spending.

Oil prices have tumbled dramatically since June 2014, from over $100 per barrel to less than $40 per barrel as of April 2016. Such a large decline in the price of oil should have a substantial positive impact on the economy, as less is spent on imported oil, freeing up income to be spent on domestic goods. However, the boost to consumer spending that many anticipated would arise from such a large oil price decline, combined with continued improvements in labor market conditions, largely failed to materialize (Brainard 2015).

Why has consumption not responded more to cheap oil? Clearly, the U.S. economy was buffeted by headwinds over the past year, like weak foreign growth and the substantial appreciation of the dollar, that may have masked the positive effects of cheaper oil. Moreover, the decline in gas prices has been more muted than the drop in the price of oil. However, another possible reason is that the impact of changes in oil prices on the economy depends not only on the magnitude of the change, but also on its perceived persistence. Consumer spending is more likely to rise if people believe the decline in oil prices will last for a while; by contrast, if consumers think lower oil prices are not here to stay, they may simply decide to save what they don’t spend at the pump. Of course, determining whether lower oil prices will last is difficult; still, consumers and investors must assess this persistence before making decisions about spending and investment.

This Economic Letter examines the perceived persistence of oil price movements since the early 1990s. We use market data on oil price futures to proxy for these perceptions. We show that the market learns gradually about the persistence of oil price changes over time, and this gradual process is tracked remarkably well by simple learning models. Learning models capture the fact that market participants were surprised by the persistence of oil price hikes in the early 2000s, after years of fluctuation around a stable long-run price level. It also suggests that, by the time oil prices peaked in early 2008, this learning process had evolved to the point where investors perceived further movements in oil prices to be largely permanent. Currently, market participants appear to have modified their perspective again to consider it more probable that oil price changes are temporary. Embedding these perceptions in a macro model of learning—and assuming that household perceptions reflect those of market participants—we find that the response of consumer spending to oil price decreases was attenuated by roughly 30%.

To illustrate how investors viewed movements in oil prices over the years and how they changed their perceptions slowly over time, we start by examining spot and futures prices in the 1990s and 2000s. Figure 1 shows the West Texas Intermediate spot price of oil in the 1990s, as well as the path that futures prices indicated for the evolution of the spot price at different times during that period. The price of oil fluctuated a fair amount, reaching roughly $40 per barrel following Iraq’s invasion of Kuwait in 1990 and falling as low as $10 per barrel in the late 1990s. However, the chart also shows that throughout the 1990s, market participants expected oil price movements to be temporary and revert back to an equilibrium level of about $18 per barrel fairly quickly. This can be seen from the paths suggested by futures curves (red dashed lines) at different points in time: Despite the gyration in the spot price of oil, the futures curves always revert back to a price of about $18 per barrel within two years. One interpretation is that investors perceived movements in the price of oil away from that equilibrium level as transitory.

Figure 1
Spot and futures prices of oil during the 1990s 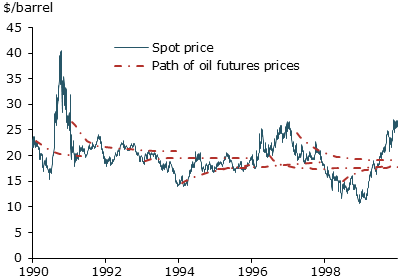 Market participants held on to this view at the start of the current century, despite sustained increases in the price of oil. Figure 2 shows that they continued to expect the price of oil to fall back to roughly $18 per barrel until as late as 2003. Gradually, however, investors revised their views in the face of the relentless rise in the spot price of oil. Indeed, by 2005 they perceived oil price movements as more persistent, with the futures curves flattening and rapidly drifting upward between 2003 and 2007. This process evolved to the point that, by spring 2008, market participants viewed the historical peak in the price of oil at that time as being very likely to stay. It took the financial meltdown and ensuing Great Recession for investors to once again revise their views and envision future oil prices stabilizing between $90 and $100 per barrel.

Figure 2
Spot and futures prices of oil during the 2000s 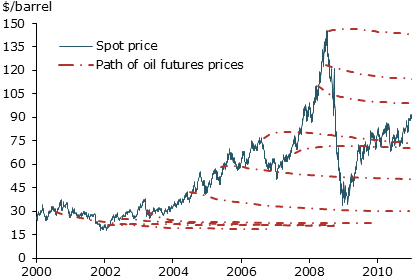 Figures 1 and 2 thus suggest that market participants gradually learn and revise their prior assumptions about the persistence of oil price movements as they gain more information over time. To examine this hypothesis, we apply learning models to the oil market and show that these models match the movements in futures prices over the past 25 years remarkably well.

Figure 3 reports the two-year-ahead oil futures prices predicted by our model along with the actual futures prices since the late 1990s. The figure shows that our model captures the movements in oil futures very well. In line with actual data, the model predicts that futures prices increased slowly between 2000 and 2005, then rapidly accelerated. The model prediction peaks at $134 per barrel in the spring of 2008, which is just slightly below the actual historical peak of $143 per barrel. In addition, the model predicts a collapse in oil prices during the Great Recession that aligns with observations, as well as a gradual rebound. Our model also tracks relatively well the evolution of oil price futures over the past three years, particularly their steep decline since mid-2014. 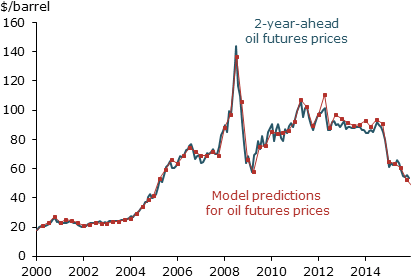 Although perceptions of the persistence of oil price changes are not directly observable, we can nonetheless use our model to extract an estimate. For instance, Figure 4 shows the perceived importance of permanent shocks since 2013. It shows that until 2013, market participants viewed oil prices as almost entirely driven by permanent shocks, but this perception changed dramatically after that. By the summer of 2014, investors perceived movements in the price of oil as being largely temporary. And while the perceived importance of permanent shocks has risen somewhat since then, it still remains low. Thus, our model suggests that the large decline in oil prices since the middle of 2014 has been perceived primarily as a temporary phenomenon that was expected to be reversed. 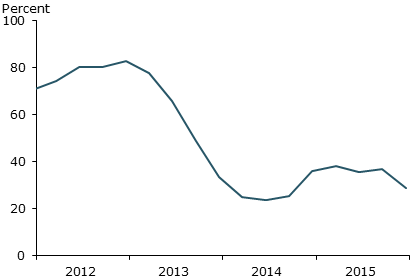 In addition to its impact on futures prices, market perceptions of the persistence of oil price changes will also affect the response of consumption and output to the extent that households share these perceptions more generally. To examine this possibility, we use an economic model in which households lack full information about the persistence of shocks affecting the economy, in a manner similar to that embodied in the learning model discussed earlier, and so must learn about these shocks over time as more evidence becomes available (see Leduc, Moran, and Vigfusson 2015).

To capture the effects of perceptions and learning, we compare the response of this economy to a highly persistent oil shock that increases supply and lowers prices under two scenarios. In the first, households have full information and correctly perceive the shock to be highly persistent; in the second, they have imperfect information and incorrectly perceive the shock to be temporary and must learn about its persistence over time. We calibrate our model so that households’ perceptions of the persistence of the shocks align with our empirical evidence in Figure 3 since mid-2014.

Model simulations suggest that when households incorrectly perceive the shock to be temporary the increase in consumption is about 30% less on impact than when they have full information. Because the decline in oil prices is considered temporary, households with less information do not believe their future income will rise as much as they would if they had full information. As a result of this less-informed perception, they choose to spend relatively less. In turn, the more muted consumption response translates into a more muted overall boost to economic activity. Over time and absent other shocks, households correctly learn the true degree of persistence of the oil price decline and start spending more as a result.

The implication in our model that consumption is dependent on the perceived persistence of the oil price change is supported by the empirical evidence reported in Aladangady and Sahm (2015). Using data from the University of Michigan Surveys of Consumers, they documented that households that expected gasoline prices to go back up during the second half of 2014 and early 2015 were less inclined to think it was a good time to buy durable goods, like cars, compared with households that expected the decline in gas prices to continue.

The steep decline in oil prices since June 2014 did not translate into a strong boost to consumer spending. While other factors like weak foreign growth and strong dollar appreciation have contributed to this weaker-than-expected response, part of the muted boost from cheaper oil appears to stem from the fact that consumers expected this decline to be temporary. Because of this, households saved rather than spent the gains from lower prices at the pump. However, continued low oil prices could change consumer perceptions, leading them to increase spending as they learn about this greater degree of persistence.

Kevin Moran is professor of economics at Université Laval.

Robert J. Vigfusson is the Chief of Trade and Quantitative Studies in the International Finance Division of the Board of Governors of the Federal Reserve System.

Brainard, Lael. 2015. “The U.S. Economic Outlook and Implications for Monetary Policy.” Speech to the Center for Strategic and International Studies, Washington, DC, June 2.