From Bitcoin’s inception in 2009 through mid-2017, its price remained under $4,000. In the second half of 2017, it climbed dramatically to nearly $20,000, but descended rapidly starting in mid-December. The peak price coincided with the introduction of bitcoin futures trading on the Chicago Mercantile Exchange. The rapid run-up and subsequent fall in the price after the introduction of futures does not appear to be a coincidence. Rather, it is consistent with trading behavior that typically accompanies the introduction of futures markets for an asset.

Bitcoin is a “cryptocurrency”—a digital currency that is not backed by any tangible or intangible assets of intrinsic value. After its launch in January 2009, the dollar price of a bitcoin remained under $1,150 until February 22, 2017, when it increased exponentially for about 10 months, as shown in Figure 1. This explosive growth ended on December 17, 2017, when bitcoin reached its peak price of $19,511. Notably these dynamics aren’t driven by overall market fluctuations, as shown by comparison with the Standard & Poor’s 500 stock index. 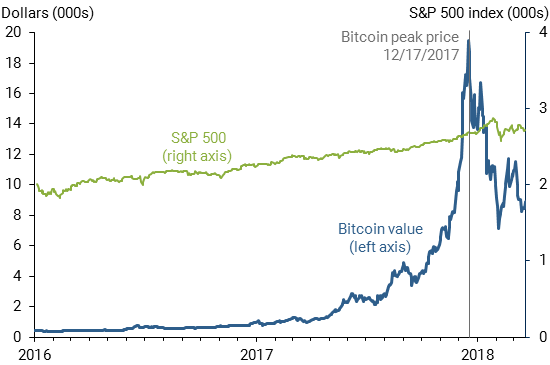 The peak bitcoin price coincided with the day bitcoin futures started trading on the Chicago Mercantile Exchange (CME). In this Economic Letter, we argue that these price dynamics are consistent with the rise and collapse of the home financing market in the 2000s, as explained in Fostel and Geanakoplos (2012). They suggested that the mortgage boom was driven by financial innovations in securitization and groupings of bonds that attracted optimistic investors; the subsequent bust was driven by the creation of instruments that allowed pessimistic investors to bet against the housing market. Similarly, the advent of blockchain introduced a new financial instrument, bitcoin, which optimistic investors bid up, until the launch of bitcoin futures allowed pessimists to enter the market, which contributed to the reversal of the bitcoin price dynamics.

Bitcoin with a capital B is a decentralized network that relies on a peer-to-peer system, rather than banks or credit card companies, to verify transactions using the digital currency known as bitcoin with a lowercase b. The first bitcoin was “mined” in 2009 after the anonymous person or group named Satoshi Nakamoto published a proof of concept for a currency that uses cryptography, rather than reliable third parties (Nakamoto 2008). Blockchain, the underlying infrastructure and ledger of bitcoin, provides a secure platform for two parties to do business with one another (Chiu and Koeppl 2017 and Berentsen and Schar 2018).

Bitcoin miners contribute computing resources to verify bitcoin transactions and hence maintain blockchain. They are compensated for sharing their computing resources with new bitcoins. The total numbers of bitcoins to be mined has been arbitrarily set at 21 million. When this volume is reached—estimates suggest in 2140—miners will be compensated by transaction fees rather than new bitcoins (Nian and Chuen 2016).

When discussing the price of a currency or an asset like bitcoin, it is useful to separate transactional demand, which arises from using bitcoins in transactions such as purchases of goods and services, from speculative demand, which arises when people are buying bitcoins in the hope that their value will increase. Speculative demand is basically a bet on the price of the underlying asset or currency increasing, because the investor does not need the asset itself. For most currencies and assets, investors have ways to bet on the increase or decline in their value using a variety of financial instruments based on the asset or a currency, so-called financial derivatives.

Before December 2017, there was no market for bitcoin derivatives. This meant that it was extremely difficult, if not impossible, to bet on the decline in bitcoin price. Such bets usually take the form of short selling, that is selling an asset before buying it, forward or future contracts, swaps, or a combination. Betting on the increase in bitcoin price was easy—one just had to buy it. Speculative demand for bitcoin came only from optimists, investors who were willing to bet money that the price was going to go up. And until December 17, those investors were right: As with a self-fulfilling prophecy, optimists’ demand pushed the price of bitcoin up, energizing more people to join in and keep pushing up the price. The pessimists, however, had no mechanism available to put money behind their belief that the bitcoin price would collapse. So they were left to wait for their “I told you so” moment.

This one-sided speculative demand came to an end when the futures for bitcoin started trading on the CME on December 17. Although the Chicago Board Options Exchange (CBOE) had opened a futures market a week earlier on December 10, trading was thin until the CME joined the market. Indeed, the average daily trading volume the month after the CME issued futures was approximately six times larger than when only the CBOE offered these derivatives.

With the introduction of bitcoin futures, pessimists could bet on a bitcoin price decline, buying and selling contracts with a lower delivery price in the future than the spot price. For example, they could sell a promise to deliver a bitcoin in a month’s time at a lower price than the current spot price and hope to buy a bitcoin during the month at an even lower price to make a profit. With offers of future bitcoin deliveries at a lower price coming through, the order flow necessarily put downward pressure on the spot price as well. For all investors who were in the market to buy bitcoins for either transactional or speculative reasons and were willing to wait a month, this was a good deal. The new investment opportunity led to a fall in demand in the spot bitcoin market and therefore a drop in price. With falling prices, pessimists started to make money on their bets, fueling further short selling and further downward pressure on prices.

Figure 2 shows the three largest bitcoin price declines in 2017. We scale the three series so that the peak values are equal to 100 on the peak event days. Hence, each point on the figure can be interpreted as a percent of the peak value. The horizontal axis represents the number of days before and after the peak dates. The price decline following the issuance of bitcoin futures on the CME (red line) is clearly larger than in the previous two reversals. Additionally, the two earlier decreases in prices returned to pre-crash levels in about a month. As of late April, the bitcoin price had not returned to its pre-futures peak. 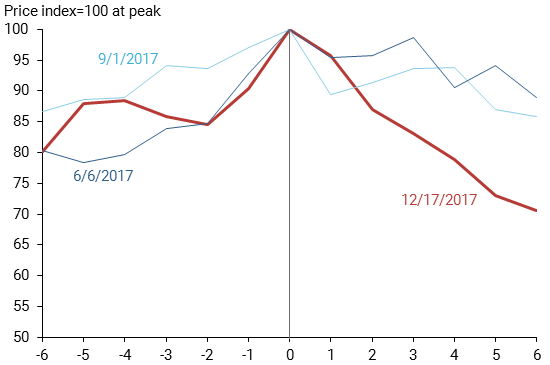 This is not the first time that markets observed a turning point following the introduction of a new instrument, as Fostel and Geanakoplos (2012) show for the more complex mortgage-backed securities market. The mechanism they describe hinges on the same driving force of optimistic and pessimistic traders.

Why, then, did the price of bitcoin fall somewhat gradually rather than collapse overnight? The answer to this is difficult. It could be that pessimistic investors lack the attention, willingness, or ability to enter the market on the first day or week of trading. Consistent with this assertion, the total volume of transactions in the CME futures market started very low, with an average trading volume of contracts promising to deliver approximately 12,000 bitcoins during the first week of trading, relative to the estimated spot market turnover of 200,000 bitcoins.

Is there a fundamental price of bitcoin?

So where is the price of bitcoin going? This is a very difficult question, and we do not pretend to be able to forecast bitcoin prices, nor will we offer any guesses. Instead, we outline a few factors that may affect the fundamental price of bitcoin, which is where we would expect the price to go in the long run, once speculative demand by optimists and pessimists balances out.

The supply of bitcoins is determined by the volume of bitcoin currently in circulation and the additional volume to be mined. The decision to mine a bitcoin depends on the cost and benefit from mining. Hayes (2015) estimated a bitcoin mining cost in 2015 of around $250, which was close to the bitcoin price at the time. More generally, however, the mining cost of bitcoin should not affect its value any more than the cost of printing regular currency affects its value—basically not at all.

Transactional demand in turn depends on a number of factors. One is the availability of substitutes. If a different cryptocurrency becomes more widely used as a means of exchange in the markets currently dominated by bitcoin, demand for bitcoin may drop precipitously because these tend to be winner-takes-all markets. Second, if traditional financial institutions become more willing to accept bitcoin as collateral, a means of payment, or a direct investment, demand may increase substantially. Finally, official recognition and regulatory acceptance of bitcoin as a means of payments would increase its circulation, while regulatory constraints or introduction of transaction fees may reduce it.

We suggest that the rapid rise of the price of bitcoin and its decline following issuance of futures on the CME is consistent with pricing dynamics suggested elsewhere in financial theory and with previously observed trading behavior. Namely, optimists bid up the price before financial instruments are available to short the market (Fostel and Geanakoplos 2012). Once derivatives markets become sufficiently deep, short-selling pressure from pessimists leads to a sharp decline in value. While we understand some of the factors that play a role in determining the long-run price of bitcoin, our understanding of the transactional benefits of bitcoin is too imprecise to quantify this long-run price. But as speculative dynamics disappear from the bitcoin market, the transactional benefits are likely to be the factor that will drive valuation.

Galina B. Hale is a research advisor in the Economic Research Department of the Federal Reserve Bank of San Francisco.

Arvind Krishnamurthy is John S. Osterweis Professor of Finance at the Stanford Graduate School of Business.

Chiu, Jonathan, and Thorsten Koeppl. 2017. “The Economics of Cryptocurrencies—Bitcoin and Beyond.” Queen’s Economics Department Working Paper 1389.

Hayes, Adam. 2015. “A Cost of Production Model for Bitcoin.” Working Paper 05/2015, Department of Economics, The New School for Social Research.