Given the low level of interest rates in many developed economies, negative interest rates could become an important policy tool for fighting future economic downturns. Because of this, it’s important to carefully examine evidence from economies whose central banks have already deployed such policies. Analyzing financial market reactions to the introduction of negative interest rates shows that the entire yield curve for government bonds in those economies tends to shift lower. This suggests that negative rates may be an effective monetary policy tool to help ease financial conditions.

In many of the world’s advanced economies, central banks have set policy rates close to or below zero. Indeed, negative rates have been relatively common for an extended time in many countries. The policy rate of the Danish National Bank turned negative in July 2012, followed by negative rates in a number of other central banks in Europe, as well as the Bank of Japan.

With short- and medium-term interest rates near historical lows in many developed countries, central banks’ latitude to provide adequate monetary stimulus during a future economic downturn has been severely curtailed. In this environment, negative interest rates may be a useful option, so it is important to understand their potential effects. One way to measure those effects is through the financial market reaction as reflected in the change of the government bond yield curve when negative policy rates are introduced for the first time.

In this Letter, I examine the market response for five central banks that have introduced negative rates: the Danish National Bank, the European Central Bank, the Swiss National Bank, the Swedish Riksbank, and the Bank of Japan. I find that the entire cross section of government bond yields tends to exhibit an immediate and persistent negative response to the introduction of this policy tool. Furthermore, short- and medium-term bond yields have been significantly negative in all five cases with no visible effective lower bound. Negative interest rates therefore appear to be a powerful monetary policy tool that could help ease financial conditions when interest rates would otherwise be stuck at zero as the perceived lower bound, as was the case in the United States from late 2008 through 2015. Evidence that the U.S. post-crisis economic recovery was constrained by this policy choice (Cúrdia 2019) suggests that mildly negative U.S. policy rates from 2009 to 2011 could have supported higher economic growth and eventually pushed up inflation closer to the Federal Reserve’s target.

In this analysis, I consider five central banks that have extended experience with negative rates as a monetary policy instrument; in order of adoption, those are the Danish National Bank, the European Central Bank, the Swiss National Bank, the Swedish Riksbank, and the Bank of Japan. Figure 1 shows the leading policy rates of those five central banks since 2012, with dashed vertical lines indicating the introduction of negative policy rates in each case. 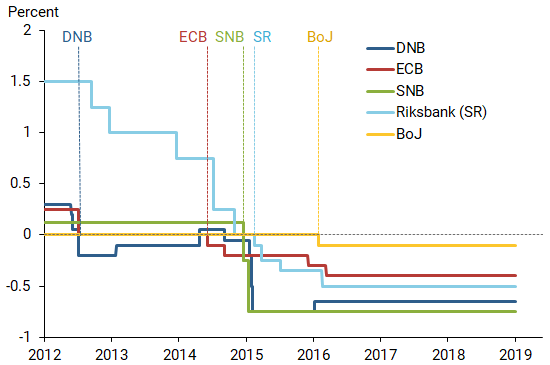 For a start, note that the five central banks introduced negative rates at separate times, and the motivations behind their decisions differed somewhat across jurisdictions, as discussed in Bech and Malkhozov (2016). However, low inflation and real rates are common and persistent themes not only to these five economies but also to the United States (Christensen and Rudebusch 2017). As a consequence, I treat the five decisions as independent events and compare the financial market reactions to each of them.

To measure the financial market reaction to the introduction of negative rates in each jurisdiction, I choose to focus on the response of government bond yields because they represent a common and widely used benchmark that is available in all five cases.

Figure 2 shows the response of the ten-year government bond yields both in the one-day event window immediately around the introduction of negative rates (green bars) as well as during the four-week window that begins two weeks before and ends two weeks after each announcement (blue bars). My main focus is on the four-week window because it captures both anticipations about policy action in the days ahead of the announcement and the financial market reaction in the two weeks following the announcement. This response represents a measure of the sustained effect that is relevant for monetary policy. Note that the persistent reaction for each is a drop in yields, and the four-week responses tend to be larger than the immediate one-day responses. Furthermore, it is worth stressing that the measured reactions do not account for how market expectations of negative rates affected government bond prices before the start of the event window, nor do they reflect any delayed market reactions that occurred after the end of the four-week window. In case there are such early anticipations or delayed reactions, the reported numbers should be interpreted as lower bound estimates of the financial market response. Finally, the reported yield changes could reflect reactions to other economic developments; however, this concern is mitigated by considering the five cases where negative rates have been adopted. 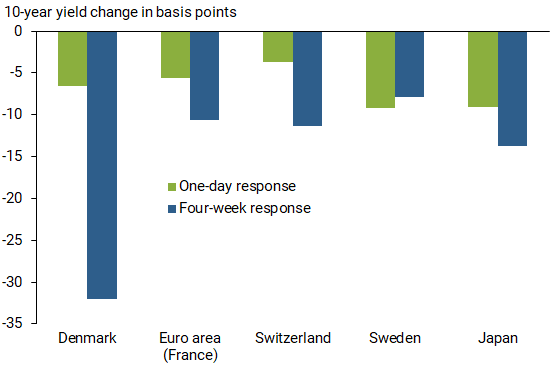 Turning to the yield curve responses, Figure 3 shows the four-week change in the yield curve in each economy for bonds with maturities from six months up to ten years, shown from left to right on the horizontal axis; changes are measured in basis points, or hundredths of a percentage point. The large level decline in the entire yield curve in all five cases reveals that the zero lower bound is a constraint only in theory and not in practice. Furthermore, these results demonstrate that negative rates are effective in lowering yields of all maturities; they thereby help ease financial conditions in much the same way that lowering the policy rate works away from the zero lower bound. 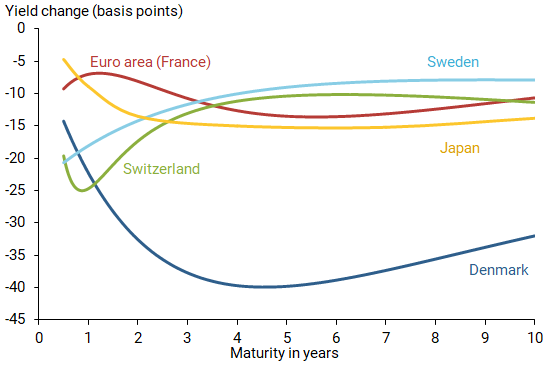 Figure 1 showed that the size of the change in the policy rate that moved it into negative territory varied across the five central banks, as did the initial level of the negative rate. This might explain some of the variation in the yield curve responses across the five jurisdictions in Figure 3. However, given that my focus here is on a qualitative assessment of the financial market reaction to the introduction of negative rates, I leave any refinements to account for such differences for future research.

What accounts for the large longer-term yield response beyond the conventional effect from lower expectations for future monetary policy rates? One potential explanation for the sizable yield curve declines is a change in beliefs among investors about the level of the ultimate effective lower bound for the policy rate, as argued by Grisse, Krogstrup, and Schumacher (2017). Related to this explanation, the decline could simply reflect a sudden realization that the shared belief that zero is either a real or self-imposed constraint was wrong and was no longer valid. Another explanation is the potentially negative signal the new rates sent about the central bank’s outlook for the economy and price inflation, as stressed by Christensen and Spiegel (2019) in the case of Japan. Unfortunately, my analysis does not allow for a distinction between these competing stories.

More importantly, though, subsequent developments have shown that short- and medium-term yields are able to assume values significantly below zero for a prolonged period, as shown in Figure 4 for two-year government bond yields. In Denmark and Switzerland, these yields have been as low as –0.98% and –1.29%, respectively. Also, the notable variation in negative medium-term yields implies that there is no obvious effective lower bound beyond the empirical fact that it is clearly located significantly below zero. 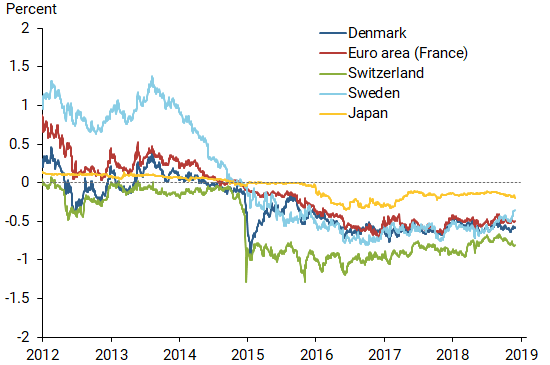 Finally, a few caveats regarding the analysis are worth stressing. First, it does not speak to any costs of negative interest rates such as reduced profitability of the banking sector depending on how the negative rates are passed on to banks through their holdings of reserves. Second, it cannot shed light on whether using this monetary policy tool actually helps raise inflation expectations and produce higher inflation, which is the key underlying motivation for resorting to it in the first place. Equally important, it does not address the broader question of whether negative rates are desirable as a policy strategy; that would call for a broader analysis of their impact on the financial system, bank profitability, and the macroeconomy as in Cúrdia (2019).

In this Letter, I examine the financial market reaction to the initial introduction of negative interest rates across five prominent central banks that have implemented this policy tool. The results indicate that government bond yields of all maturities tend to exhibit both an immediate and a persistent negative response to the adoption of such a policy. Furthermore, most medium- and longer-term interest rates have trended even lower subsequently, which suggests that the ultimate effective lower bound for short-term nominal interest rates is significantly below zero, at least for the five economies considered here. Central banks that have yet to introduce negative rates may take some comfort from this evidence as there appears to be room below zero for additional economic stimulus.