Unemployment insurance benefits were expanded substantially to help overcome the pandemic labor market shock in early 2020. However, improved labor market conditions in early 2021 prompted many states to withdraw from the enhanced unemployment benefits programs several months before the federal program was scheduled to end in early September. A comparison of states that ended enhanced benefits early with those that maintained them suggests that the withdrawal is associated with a small pickup in employer hiring, consistent with prior studies that found the unemployment benefit expansions had modest effects.

Unemployment insurance (UI) benefits are a crucial source of income support for people who lose jobs through no fault of their own, helping them to maintain necessary household spending and financial stability. This support also helps overall economic activity, an especially important feature during recessions, when job losses are widespread. As such, UI payments in the United States are typically enhanced during recessions, mostly through extending eligibility beyond the normal 26 weeks and sometimes also through increasing weekly benefit payment amounts.

Economists and policymakers typically weigh these positive aspects of UI benefits against their potentially adverse effects on job search: by easing the financial pressure to find work, generous benefits may overly delay people’s transitions to prior or new jobs. This “moral hazard” effect could impede the recovery from a severe economic downturn by slowing down the process of matching potential workers with available jobs.

These considerations became particularly relevant during the pandemic recession and early recovery in 2020 and 2021. Federal legislation in early 2020 increased weekly UI payments to historically unprecedented levels, and the scope and duration of eligibility were also expanded. The enhancements continued at somewhat lower levels in 2021. By midyear, however, improved labor market conditions prompted numerous states to end enhanced UI benefits earlier than the expected federal termination in September.

Comparing states that cut enhanced UI benefits with those that maintained them provides useful insights into the labor market effects of UI payments. We find small differences in employer hiring activity between these two groups of states, consistent with other recent assessments of the impact of the pandemic UI expansions (for example, Petrosky-Nadeau and Valletta 2021).

UI policies during the pandemic: A partial experiment

In late March 2020, the federal Coronavirus Aid, Relief, and Economic Security (CARES) Act granted all UI benefit recipients an additional $600 per week on top of their usual benefits. It also substantially expanded eligibility, including to people who were self-employed, and increased the number of weeks recipients could receive benefits. The $600 supplement expired at the end of July 2020 but was partly renewed for 2021 with a $300 per week supplement through early September.

These supplements represent substantial increases in UI benefits relative to the typical weekly benefit of just under $400 in normal circumstances. With the $600 supplement, most recipients were receiving more in weekly UI benefits than their prior earnings (Ganong, Noel, and Vavra 2020), and with the extra $300 in 2021, many were close.

By early 2021, job openings had reached record levels, and employers were reporting unprecedented challenges filling them. These tight labor market conditions prompted some states to end their participation in the federal expansions several months before the program expired. Most of these states eliminated the supplement and eligibility expansions in June. Other state policies varied: four states eliminated the $300 supplement but kept the expanded eligibility, one of those plus two other states ended their involvement in July, and in two states, the announced policy change was reversed by court order (Holzer, Hubbard, and Strain 2021).

To analyze the impact of these UI withdrawals, we group the 24 states that implemented a policy change and were not reversed by the courts in our “cut UI” group. This leaves 27 states, including the District of Columbia, in the “kept UI” group. The states that cut UI benefits account for just under 40% of total national payroll employment during the time frame we examine. We find similar results when we exclude the eight states with exceptions noted above, following the approach of Holzer et al. (2021).

Comparing labor market outcomes between states that eliminated the enhanced UI benefits and those that maintained them provides a “natural experiment” to assess the impact of the policy change. In general, withdrawing UI benefits should have the opposite effect of expansions, tending to increase the incentives for jobless individuals to search for and accept job offers. One drawback to this approach is that labor market conditions before the policy change were not identical between the two sets of states. Nonetheless, the comparison sheds some light on the motivation for states’ UI withdrawals and their labor market impacts.

Given that the withdrawal of expanded benefits was intended in part to ease hiring challenges employers faced from tight labor markets, the pace of hiring is a natural starting point for assessing the impact of the policy change. We use data on hiring rates at the state level from the Bureau of Labor Statistics (BLS) Job Openings and Labor Turnover Survey (JOLTS). The hiring rate is measured as the number of hires during a month relative to employment.

Figure 1 shows the hiring rates in the two groups of states for the first nine months of 2021. We highlight the UI cuts that started in June 2021 and treat July as the initial impact month, comparing the two groups through September, when federal UI expansions were terminated for all states. Although impacts of the UI cuts may have started any time after they were announced, as early as May, our analysis confirms that measuring the impacts starting in July yields the most reliable estimates.

Figure 1 shows that states in the group that cut the enhanced UI had higher hiring rates before the cuts, consistent with relatively tight labor markets in those states. The gap largely closed in June as hiring surged in the states that kept the enhanced UI. In subsequent months hiring rates picked up a bit further in the “cut UI” states but trailed off in the “kept UI” states. Regression analysis confirms that, over the full time the policy difference was maintained (July to September), the states that cut UI benefits experienced a relative increase in hiring rates, with statistical significance just below the conventional 5% cutoff. However, the size of the effect—about 0.2 percentage point—is quite small relative to monthly hiring rates of around 4 to 5 percentage points. This small impact of the UI withdrawals on hiring rates is broadly consistent with earlier research that found the initial CARES Act UI expansions had a small effect on job-finding rates (Petrosky-Nadeau and Valletta 2021). It also suggests that states that withdrew early met their goal of easing hiring constraints, although perhaps imperceptibly from employers’ perspectives.

We next consider that employers may have wanted to take advantage of an expected surge in job applicants following the UI withdrawals by widening their recruiting with more job openings. Figure 2 shows job opening rates relative to employment for the two groups of states. However, our results do not show a disproportionate increase in job openings in the states that cut UI, a finding confirmed by a regression analysis comparing job opening rates for the two sets of states. 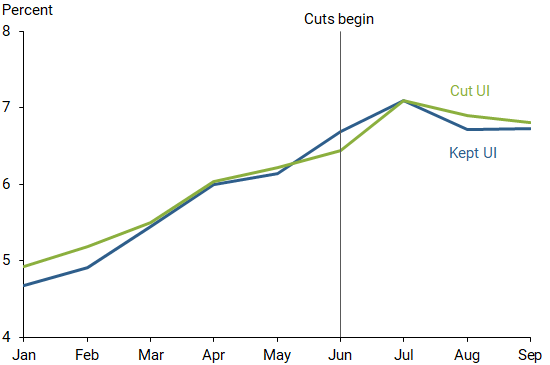 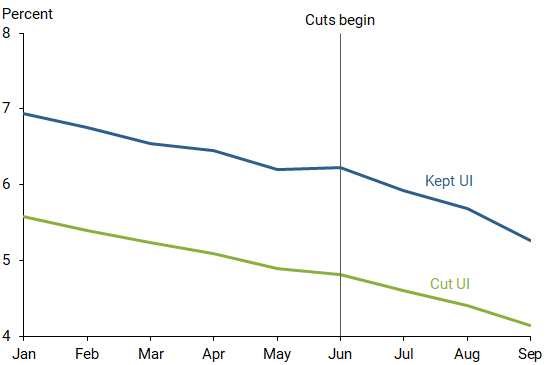 The absence of the expected effect of the policy change on relative unemployment rates is surprising. Eliminating UI benefits is likely to cause some job seekers to accept job offers or cease their search because they would no longer qualify for UI; that should directly reduce unemployment rates, which are calculated from the BLS household survey supplemented by information on UI benefits received. The absence of this effect may reflect already low unemployment rates in states that cut the enhanced UI benefits, combined with the limited impact on hiring rates. Stronger labor market conditions in the states that cut UI may also have prompted some individuals to return to an active job search; they would then be counted as having rejoined the labor force as unemployed job seekers, thereby offsetting the unemployment decline caused by the UI cuts. However, our separate analysis of labor force participation did not uncover such patterns in the data.

Our analysis shows that the elimination of enhanced UI benefits in many states in mid-2021 was associated with a small increase in hiring activity but no differences in measured unemployment. These findings are consistent with other recent work that finds small effects of the UI expansions and withdrawals, for example, Petrosky-Nadeau and Valletta (2021) and Coombs et al. (2021). Our findings and conclusions contrast with those of Holzer et al. (2021), who find a substantial pickup in job-finding rates by unemployed individuals in states that withdrew UI, which they use to infer substantial effects on relative unemployment rates. The difference in our results may reflect the different data types used: we use aggregate state data to focus on overall hiring and unemployment rates, while they analyze individual microdata and focus on hiring of the unemployed.

Our findings can be interpreted in various ways. We find that the UI withdrawals had limited direct impacts on hiring rates, which suggests the enhanced UI benefits were not an important source of labor shortages in 2021. On the other hand, the termination of UI benefits did not undermine labor market conditions in the states that cut benefits. Nonetheless, studies of past UI benefit expansions suggest that many individuals who lose benefits are more likely to be forced to reduce consumption and suffer substantial hardship (Rothstein and Valletta 2017). As Holzer et al. (2021) emphasize, such tradeoffs are important considerations for designing and assessing UI policy changes.

Sarah Albert is a research associate in the Economic Research Department of the Federal Reserve Bank of San Francisco.

Olivia Lofton is a research associate in the Economic Research Department of the Federal Reserve Bank of San Francisco.

Robert G. Valletta is associate director in the Economic Research Department of the Federal Reserve Bank of San Francisco.

Rothstein, Jesse, and Robert G. Valletta. 2017. “Scraping By: Income and Program Participation after the Loss of Extended Unemployment Benefits.” Journal of Policy Analysis and Management 36(4), pp. 880–908.