Rising rents account for a significant portion of recent inflation. Estimates of how rent inflation typically responds to two leading indicators—current asking rents and current house prices—can help forecast the path of overall inflation for the next two years. This method predicts that higher rent inflation could add about 0.5 percentage point to personal consumption expenditures price inflation for both 2022 and 2023. These potential additions are important in light of the Federal Reserve’s 2% inflation target.

Shelter and housing costs account for a significant portion of the basket of goods used to measure inflation in the consumer price index (CPI) and the personal consumption expenditures price index (PCEPI). Two leading indicators of future shelter and housing costs are current asking rents and current house prices. These leading indicators have been rising rapidly since the pandemic began, posing the risk of higher future inflation. When asking rents rise, they push up the average rent of the entire stock of rental units as new contracts are signed and enter the database used to compute the rent component of overall inflation. When current house prices rise, they signal that owners or landlords expect the potential rental value of the house to be higher in the future.

In this Economic Letter, we develop an empirical model to predict future rent inflation using data on current asking rents and current house prices in 15 metropolitan statistical areas (MSAs). Our panel model predicts that future rent inflation could increase by about 3.4 percentage points (pp) in both 2022 and 2023 relative to the pre-pandemic five-year average. This prediction translates into an additional 1.1pp increase in overall CPI inflation for both 2022 and 2023. In terms of overall PCE inflation, the measure used by the Federal Reserve to assess price stability, our prediction translates into an additional 0.5pp increase for both 2022 and 2023. The smaller predicted additions for PCE inflation reflect the fact that housing costs make up a smaller fraction of the basket of goods in the PCEPI than in the CPI.

“Rent of primary residence,” hereafter simply “rent,” measures the price of the current stock of rental units across U.S. cities. Rent is a component of the broader “shelter” and “housing” categories in the CPI and PCEPI, respectively. The other major component of these categories is “owner’s equivalent rent” (OER), which estimates the monthly rent a house that is currently owned would command on the rental market. OER is computed by the Bureau of Labor Statistics using the same underlying data as rental units but with an alternative formula to estimate the equivalent rent of owner-occupied units. The percentage change in rent, which we refer to as “rent inflation,” is highly correlated with the percentage change in OER; the correlation coefficient between 12-month rent inflation and 12-month OER inflation is 0.83. While the CPI and the PCEPI use the same underlying data on rental units, the combination of rent and OER comprises 32% of the basket of goods in the CPI but only 15% of the PCEPI consumption basket.

Figure 1 plots the 12-month rent inflation component of the CPI (blue line) from December 1988 to December 2021. Rent inflation declined substantially during 2020 as the economy was hit by a severe recession induced by the COVID-19 pandemic. More generally, rent inflation is highly procyclical, showing a strong positive correlation with the inverse of the unemployment rate (red line). The intuition for this procyclical relationship is that landlords can ask for higher rents during an economic expansion, when prospective tenants are more likely to be employed and earning higher incomes. Rent inflation bottomed out in early 2021 at 1.8% and has since rebounded to 3.3% in December 2021, just below the pre-pandemic five-year average of 3.7% from 2015 to 2019. 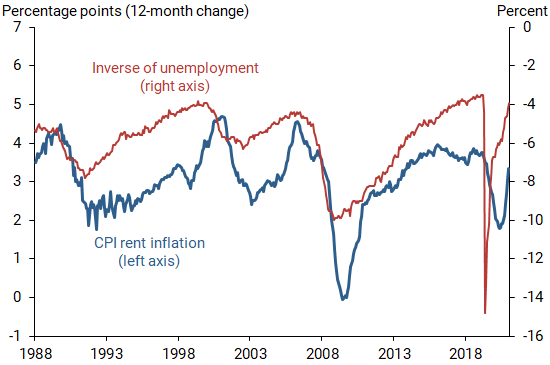 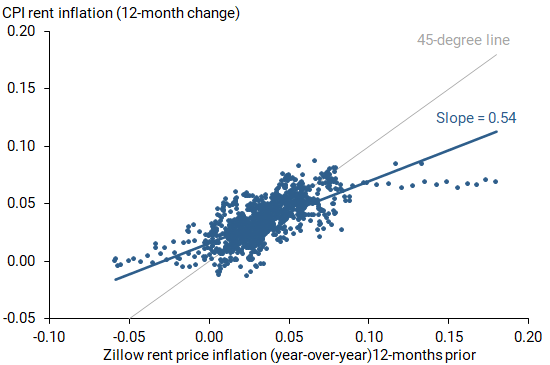 Research shows that movements in current house prices can also help forecast future rent inflation and future overall inflation (Brescia 2021, Zhou and Dolmas 2021). According to economic theory, the current price of a house should be linked to the present discounted value of the future service flows or rent payments that an owner or landlord could expect from the house. The Zillow Home Value Index tracks the typical house price in a given MSA, based on recent sales of comparable properties. Similar to Figure 2, current CPI rent inflation is positively correlated with 1-year lagged Zillow house price inflation, indicating that MSAs with higher Zillow house price inflation in one year are more likely to have higher rent inflation over the following year. However, this relationship is a bit weaker than the relationship with Zillow asking rent inflation shown in Figure 2. 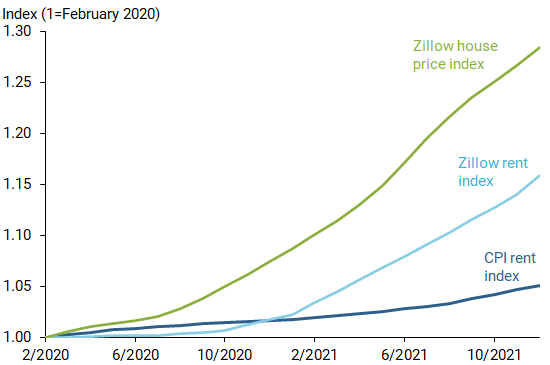 We use monthly data on asking rents and house prices from 15 MSAs to predict the path of future CPI rent inflation in the same MSAs over the subsequent 24 months. The data cover the period from January 2014 to December 2021. The prediction model considers how an individual MSA’s change in CPI rent inflation over various future horizons relates to the most recent 12-month percentage changes in Zillow asking rents and Zillow house prices for the same MSA. To isolate the predictive impact of asking rents and house prices, we account for numerous time-varying MSA-specific factors such as rent inflation trends, vacancy rates, and unemployment rates. We include time fixed effects, which account for factors that are common across all MSAs, such as the 30-year mortgage interest rate and the overall CPI inflation rate. We also include MSA fixed effects which account for factors that are common within an MSA but remain fairly constant over time, such as differences in housing variety or population density.

Our model confirms that an increase in current asking rents or current house prices can push up the CPI rent index for a typical MSA for as long as 24 months into the future. Given the currently elevated levels of Zillow asking rent inflation and Zillow house price inflation averaged across all MSAs, the model predicts that CPI rent inflation will increase by about 3.4pp for both 2022 and 2023, relative to its historical average rate of 3.7%. The model predicts a similar path for future OER inflation, but this prediction is less precise. 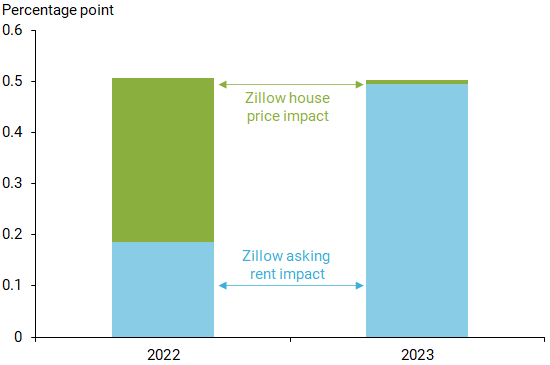 As the U.S. economy recovers from the effects of the COVID-19 pandemic, some increase in rent inflation should be expected, given that landlords can ask for higher rents when prospective tenants are employed and earning higher incomes. However, the extraordinarily large increases in two leading indicators of future rent inflation—asking rent inflation and house price inflation—point to significant upside risks to the overall inflation outlook. The potential increases are particularly significant for CPI inflation, which places a larger weight on shelter costs. Still, the potential additions to PCE inflation of about 0.5pp for both 2022 and 2023 are important to consider in light of the Federal Reserve’s 2% inflation target.

Kevin J. Lansing is a senior research advisor in the Economic Research Department of the Federal Reserve Bank of San Francisco.