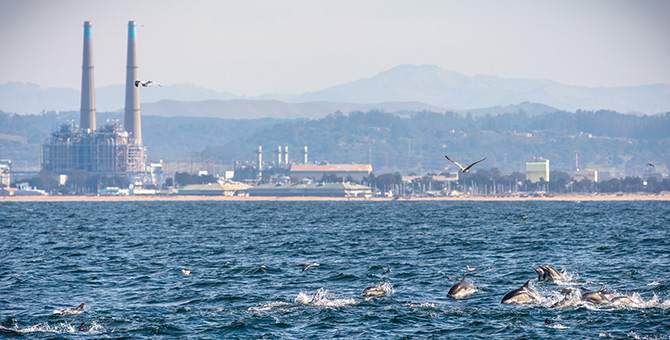 Electricity is indispensable. It powers our factories and offices, our homes, and, increasingly, our cars. It’s essential to our economy and the vitality of our communities.

Mary Daly, our President and CEO, recently sat down with CEOs from the Twelfth District’s  utility sector to discuss how climate risk is impacting their industry. Throughout the conversation, the roundtable participants emphasized the importance of addressing climate risk.

While residents of the Twelfth District can get power by simply flipping a switch or plugging in a device, generating and delivering that power is anything but simple. Bringing power to businesses and homes depends on a complex grid–the Western Interconnection–of power plants, utilities and 136,000 miles of transmission lines and other critical infrastructure stretching across 14 states and even parts of Canada and Mexico.

As the roundtable’s participants informed President Daly, a changing climate has significantly increased the challenge of managing and operating utilities on this grid. This is true whether the utility is public, investor-owned, or a cooperative. It also means, as the CEOs emphasized, that they now place climate risk front and center in their business planning.

Each utility leader emphasized the availability of advanced technology as a key factor in efforts to manage climate risk. Utilities, as the CEOs pointed out, are research and development consumers. They depend on the public and private sector to develop the technology they can then deploy. This is especially true for their climate mitigation efforts. They shared that effective and efficient means of generating clean energy are critical necessities to meet each utilities ambitious carbon reduction targets.

With a view to the Federal Reserve’s role in maintaining stable prices, President Daly and the CEOs discussed the impact of new technology on electricity prices. Leaders shared that bringing new technology online to meet the industry’s net zero or zero emissions targets is expensive and necessitates hundreds of billions of dollars in investment. In the short-term, paying for these investments may lead to higher energy prices, but the CEOs pointed out that as the technology matures and becomes increasingly efficient, the cost of energy to consumers will fall over the long run.

When discussing their efforts to integrate climate risk into how they adapt their operations, the CEOs agreed that severe weather and weather-related natural disasters are a paramount challenge. This is true in terms of the frequency, strength, and duration of severe weather. There are more storms, droughts, floods and fires. They are bigger, more destructive and last longer. In addition, the increase in severe weather can have cascading effects as when prolonged drought not only increases the danger of wildfires but also affects snowpack levels and the amount of water available for hydroelectric power.

The CEOs noted the dramatic increase in their efforts to harden their grids, especially in view of the striking increase in the length and intensity of wildfire season.

They also cited several immediate concerns on the horizon. The issue of reinsurance, or insurance for insurers, has emerged around the rising cost of repairing infrastructure damaged by more severe weather-related events like wildfires. This reinsurance has become more costly and difficult to obtain. In some cases, insurers are refusing to issue new policies.

If reinsurance is a relatively new concern, the challenge of building adequate transmission capacity is a long-established issue that has taken on new salience for the roundtable participants. They noted that the ability to move energy across an integrated grid is now more important than ever. Moving energy from one part of the grid to another can address climate-related impacts such as regional spikes in demand related to extreme heat.

CEOs also shared that an interconnected grid allows them to take full advantage of a variety of renewable energy sources. More interconnected transmission also acknowledges that differences in weather patterns may make it necessary to move renewably generated energy to areas of high need at a given time. One participant cited the classic example of moving solar power generated from the sunny southwest to the cloudier Pacific Northwest.

In addressing these challenges, the executives concluded by pointing to new efforts to coordinate operations and energy markets across the Western Interconnection. They shared that this coordination as well as stronger partnerships between the utilities, government at all levels and other private sector actors will be key to the sector’s on-going climate adaptation and mitigation efforts.

In providing these insights, the roundtable participants deepened what the San Francisco Fed learned from its recent climate risk survey of nearly 100 businesses across the Twelfth District. The first of its kind conducted by the Bank, the survey found businesses adopting formal risk mitigation strategies, including monitoring climate-risk exposure and reducing carbon dependence. To learn more about the survey findings, read our Economic Letter, How Are Businesses Responding to Climate Risk?