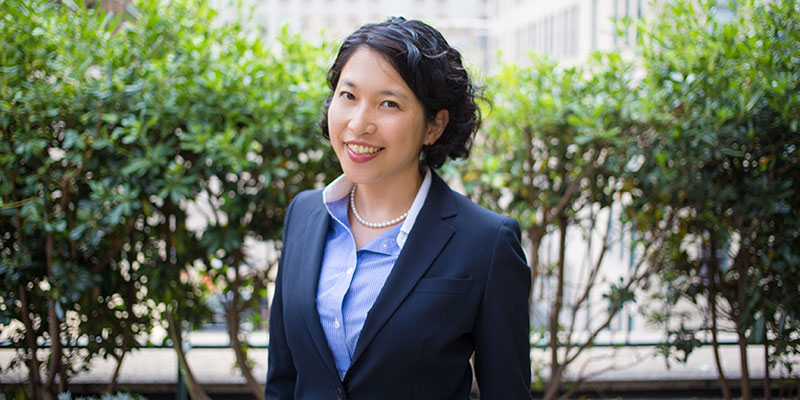 Thailand: A Lifetime Quest for Understanding

It takes a certain constitution to follow the ups and downs of a nation’s economy with a cool head. It requires a combination of intellectual curiosity, unflappable practicality, and relentless energy. Linda True embodies all of these traits, wrapped in a sense of humor that helps her navigate challenging situations and delve into research for the SF Fed’s Country Analysis Unit with aplomb.

True has spent about half her life in her parents’ native Thailand and half in the United States, where she was born and spent her early childhood. Before moving to Thailand for the first time at age 11, True’s world was a very typical New York City suburban community. She remembers being the only Asian kid and a bit disconnected from her family’s roots.

“I was cleaning out my room and I saw this pen that said ‘Thailand.’ I asked my mom, ‘What’s Thailand?’ I think I’ve spent most of my life trying to answer that,” she says.

During the family’s big move, True’s family stopped in Japan. Observing the stark differences between the United States, Japan, and Thailand sparked what would become a lifelong quest for understanding.

“I’ve always been interested in what makes a country tick, what makes systems tick,” she says.

True attended high school and college in Thailand. She took a job as an assistant auditor at a Big Four firm, and experienced the long-lasting aftermath of the Asian financial crisis. She left Thailand to get a graduate degree from Johns Hopkins, where she studied International Relations, concentrating in International Economics, Southeast Asian Studies, and Asian International Relations. She also spent nine months interning for the SF Fed before returning to Thailand for a job in a global law firm.

In 2006, True was living in Bangkok when the Royal Thai Armed Forces took over the government. Most people don’t recall a coup d’état as a funny story, but True chuckles dryly as she tells it.

Sitting in a restaurant, a waiter told True she would have to leave. The restaurant was closing because of a coup. “I heard ‘accident,'” she recalls, noting that the words for “coup” and “accident” can sound similar in Thai. She left wondering what kind of accident would cause a restaurant to close.

Soon she was alerted by texts about the real situation and warned to get out of the neighborhood since it historically hosts civil unrest. She hopped in a taxi and told the driver to avoid the Parliament building, another hotspot guarded by tanks.

“Wouldn’t you know it, the driver drove right by Parliament anyway,” she says with a shrug. “But it was OK. It was a peaceful coup.”

During that five-year stint in Bangkok, besides the coup, True witnessed on-and-off civil unrest. Both her apartment and office were central to the action. In 2010, she missed the buildup to the turmoil when 100,000 citizens protested for months entrenched in central Bangkok because she was attending a two-month silent meditation program in rural Thailand. However, she returned just in time for the riots and military crackdown in May. Later, in 2011, she had to evacuate Bangkok for two weeks due to the worst flooding in 50 years. The natural disaster affected two-thirds of the country.

Despite all of these events, True insists it was the promise of an interesting job at the SF Fed, and not unrest in Thailand, that drove her to return to the United States.

Although she has moved away from her family’s homeland, for now, the born researcher still studies Thailand and Southeast Asia every day as a senior supervisory analyst in the SF Fed’s Country Analysis Unit.

True spends her days performing financial and country risk analysis regarding the financial sectors in the region. She is also deeply involved in the Asia Program, which aims to facilitate the exchange of ideas on Asian banking and financial developments through a wide range of events and publications, such as the Asia Financial Forum events, Asia Focus reports, and Pacific Exchange blog. She recently developed a two-week training program for regulators from all over Asia, in which speakers from the Fed gave a cross-cutting and in-depth dive into how the Bank conducts supervision and shared best practices.

So what is Thailand? When asked if she finally has the answer to the question she asked her mother so long ago, True takes off her glasses and closes her eyes, running one hand through her hair as she thinks. She still can’t sum it up in a pat answer, but ideas continue to take shape as she pursues her research.