Robert T. Parry served as president and chief executive officer of the Federal Reserve Bank of San Francisco from 1986-2004. A native of Harrisburg, Dr. Parry received a B.A. degree from Gettysburg College. He earned a M.A. and a Ph.D. in economics from the University of Pennyslvania and holds honorary doctorates from Gettysburg College and Southern Utah University. 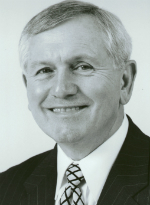