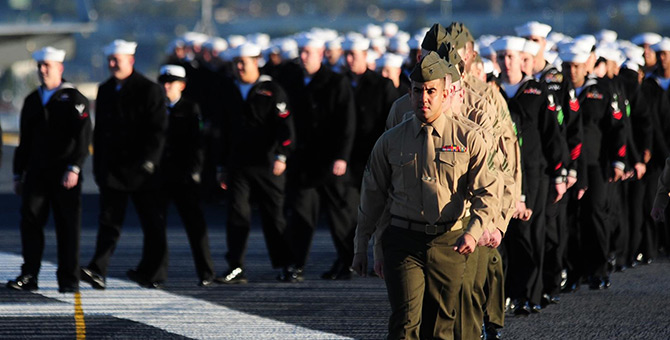 Veterans Day honors those who choose to wear the uniform of their nation and serve their country. This past Veterans Day, the gratitude spread beyond current and former servicemembers at the SF Fed.

Charlie Mike, the SF Fed’s first employee resource group (ERG) for military reservists, veterans, and their allies, took this opportunity to present the Patriot Award to two leaders who have shown great support to members of the military reserves. The name Charlie Mike is derived from the NATO-phonetic alphabet acronym for Continue the Mission, and that is exactly what this group intends to do. Charlie Mike’s mission is to promote an inclusive community of veterans and veteran allies within the SF Fed, and having supportive managers makes a big difference. According to the Employer Support of the Guard and Reserve, a division of the Department of Defense, “The Patriot Award reflects the efforts made to support citizen warriors through a wide range of measures like flexible schedules, time off prior to and after deployment, providing support for military families, and granting leaves of absence as needed.”

“I nominated Rita Aguilar, senior vice president of People Success and Strategy, and Eric Cheng, who manages our Inclusion + Diversity team, for the Patriot Award in recognition of their commitment to accommodate my military duties throughout my interview process,” says Commander Gary Ross, U.S. Navy Reserve and SF Fed senior inclusion and diversity specialist. “The SF Fed did everything possible to give me a full opportunity to show my worth and eventually join their team, despite the unusual circumstances I was facing due to my military obligations.”

Gary had his first conversation and interview with the SF Fed after landing at San Diego International Airport, having just finished two-weeks of annual training as the officer-in-charge of a maintenance team supporting the Navy’s Littoral Combat Ships. After his initial interview, Gary set off to Norfolk, Virginia, where he joined the crew of USS Bainbridge, a guided missile destroyer, to help train and certify the team for combat operations in the North Arabian Gulf. By the time his second interview rolled around, Bainbridge was underway in an ocean pockmarked with storms. The hiring managers stayed flexible with Gary and timed the interview for a brief moment of optimal conditions—a moment of calm seas and strong enough satellite connection for outgoing phone calls.

“When I think about the meaning of the Patriot Award, it was clear to me that my new employers at the SF Fed deserved this honor,” Gary explained. “Right away, they made a meaningful effort to allow me to pursue a career at the SF Fed while continuing to serve our country. I know not every employer would continue the interview process with a candidate who seemed to be always engaged in military duties. The fact that everyone made adjustments to the standard interview process to accommodate my military training and time at sea reflects great credit on both themselves and the SF Fed. I’m proud to present my new leadership with the Patriot Award in recognition of this.”

While Gary’s circumstances were unusual when interviewing for the job, everyone involved was happy to do what was necessary to be inclusive in the process and live up to the values of our organization. “We’re honored and flattered to receive this award from you,” Rita said during the ceremony. “The SF Fed will continue to do our best to create an inclusive and welcoming destination for anyone who has served their country. The Charlie Mike ERG will only make us stronger in this effort.”

Alex Tidd is a communications specialist on the Federal Reserve Bank of San Francisco’s Communication + Creative team and a U.S. Navy veteran who served for five years. He is also a founding steering committee member for Charlie Mike, the SF Fed’s employee resource group for military veterans and reservists.