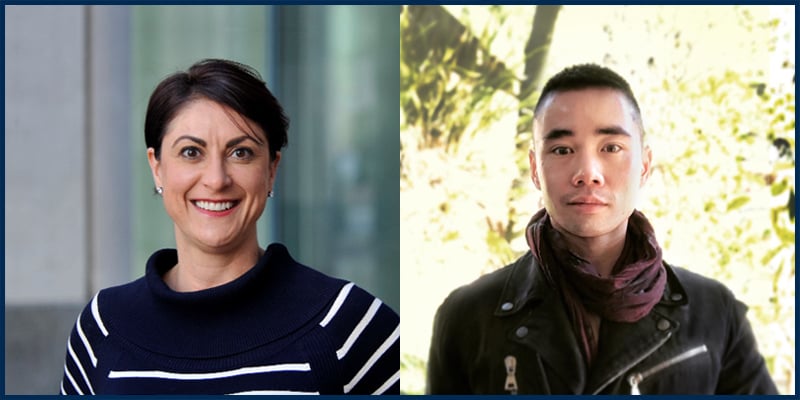 Pride in Bringing Your Whole Self to Work

Shirin Amini was chatting on the phone with her niece, a third-year college student, and trying to keep up.

“My friend is asexual,” her niece was explaining, “and she’s demiromantic.”

“I was like, ‘What are you talking about?'” recalls Shirin, accounting manager in the San Francisco Fed’s Financial Management Division. “I have no idea.”

The language of love, it seems, is getting more complicated.

Shirin, who is gay and grew up in the 80s and 90s, realized that despite her decades of speaking out for LGBTQ+ rights, she wasn’t up to date on current discussions within the community. And if she’s confused, what about folks who aren’t part of the community?

For Shirin and Chris Wong, co-leaders of the San Francisco Fed’s 12LGBTQF employee resource group (ERG), the Fed is a space to encourage conversations and understanding about issues for both LGBTQ+ people and allies, in order to bring about a more empathetic workplace and society.

After her conversation with her niece, Shirin organized a multigenerational panel to speak about their experiences of identity, gender, and sexual orientation. The goal was to gain insights into what’s happening in youth culture and share stories and lessons of the past.

Shirin represented GenX, sharing her coming-out story. Her family, despite being progressive, didn’t quite know how to fully accept her. A panelist representing Baby Boomers talked about the terror, loneliness, and stigma of being gay during the AIDS crisis. A Millennial female-bodied person who uses male pronouns spoke about the differences between gender identity and expression, and anatomical sex.

Following the panel, Shirin says, many attendees changed their email signatures to include preferred pronouns. The talk helped them understand that this act of solidarity normalizes the use of preferred pronouns, making it easier for people whose pronouns don’t necessarily match their appearances to let others know without a (sometimes awkward) conversation.

Being out at work is important to Chris, who is a financial institutions analyst for the SF Fed. Chris identifies as gay and uses “he/him/his” pronouns. As a recent college graduate, he’s part of a generation that is more accepting, in many ways, than previous generations. Yet, he still faced bullying and stigma in high school for his sexual orientation. In his first job out of college, he remembers not knowing when or whether he should come out to his co-workers.

“I was confident in my identity. However, I was not confident my identity would not be a detriment to my career,” he says with candor. “When I began working, I understood the reality that I could be terminated in certain states because of my sexuality. Even today, I am conscious that services may be denied due to my sexuality or gender expression.”

At the San Francisco Fed, he’s proud that he’s can be part of 12LGBTQF and bring his whole self to work.

“Instead of focusing on pushing my personal life aside, I can focus on my task at hand,” he says. “By bringing your authentic self to work you’re not trying to hide anything. You’re just being present.”

One of 12LGBTQF’s annual activities is creating a “human Pride banner” or “human Banner of Love,” in which people stand in formation to create a human version of the rainbow flag for Pride month. With most SF Fed employees working from home during the COVID-19 pandemic, the group instead held an online happy hour for its members to stay connected.

At the same time, with a backdrop of the pandemic and 50th anniversary of the nation’s first Pride marches, there’s a growing global conversation about racial equity and doing more to address anti-Black racism. The recent national conversation over the Black Lives Matter movement has also shifted some of the conversation about next steps. Members of the 12LGBTQF+ community know all too well what it’s like to be part of a historically marginalized group. That has Chris and Shirin contemplating their ERG’s role in the movement.

“Sometimes the most impactful thing you can do is be an ally,” says Shirin, who was previously on the steering committee of the Women’s Professional Network and was a cofounder of FedAble (an ERG that supports people with disabilities and educates others about their capabilities). “So, I’m looking at what can we do to support Mosaic, the African-American Professional Network? How can we support members who have identities that intersect? How can we be strong allies? Where do we need to step forward or back?”

What’s clear is that 12LGBTQF and other ERGs all play essential roles in the Bank’s mission and culture of acceptance. In fact, Chris says that he was certain he wanted to work at the Fed when, after applying, he saw a blog post about a previous year’s human Pride banner.

“Seeing the banner signified the SF Fed has an environment in which I could always bring my most authentic self to work,” says Chris. “I would not live in fear of my career being held back or receiving rejection from my peers for my identity.”