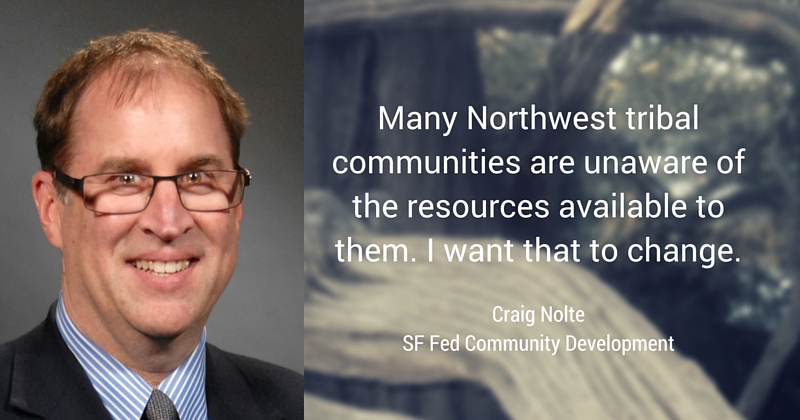 Craig Nolte drove off the Nez Perce Tribe’s Idaho reservation with a knot in his stomach. It felt like a bad day but was actually a turning point in his career.

The young examiner for the Office of Thrift Supervision was supposed to examine a bank, write a report, and move on. He’d driven to the brown, dry plains of North Central Idaho to map a Lewiston bank’s lending patterns. On the reservation he found homes in dire need of repair and realized that although Nez Perce deposited their savings in the bank, loans stopped at the reservation border.

“A lot of us build wealth through homeownership. These tribal members didn’t have that benefit. They couldn’t get a home loan,” Nolte explains.

The bank wasn’t violating any regulations. It couldn’t lend on the reservation because the tribe didn’t have laws allowing collateral in exchange for loans. Providing a solution wasn’t within Nolte’s purview and he moved on to the next examination in frustration. But the memory of that injustice stayed with him.

When he joined the SF Fed in the early 1990s, Nolte was tasked with improving bank compliance with the Community Reinvestment Act. The 1977 law encourages depository institutions to help meet the credit needs of communities in which they operate. He immediately said, “I think the Indian reservations are ripe for the CRA,” and began reaching out to tribes, encouraging them to pass laws that would make it possible for banks to provide mortgages on reservations. He also began spearheading workshops with lenders throughout the country, educating them about government loan products that would allow them to safely and soundly make loans on Indian reservations. Later, he held workshops designed to examine and speed up those loan processing times.

Still, the homeownership rate on reservations is just 54 percent compared to 65 percent nationwide. Eighteen years after he first visited their Idaho reservation, Nolte, now a Regional Manager in the SF Fed’s Community Development Department, returned to work with the Nez Perce toward positive change.

“I assisted the tribe, the City of Lapwai, and a nonprofit organization to conduct a community assessment to develop ideas on how to revitalize the community,” he explains. “In 2014, I presented at a conference sponsored by the tribe on the types of laws they could adopt that would help spur economic development on the reservation. Then in 2015, I facilitated a workshop to help increase access to additional types of mortgage products for the Nez Perce and other area tribes.”

Nolte has since held more than 100 meetings on about 50 Indian reservations in Washington, Oregon, Utah, Idaho, and Nevada, bringing tribal leaders together with lenders and nonprofit organizations. He’s also expanded his work to other indigenous communities outside the continental United States to Alaska, Hawaii, and Guam, leading multiple national initiatives to address the challenges facing Indian tribes. On his desk sits an orange folder displaying a resolution from the legislature of Guam, recognizing his contribution to the territory’s creation of much-needed affordable housing. And in Hawaii he’s exploring ways to better serve the needs of Oahu’s large homeless population, which struggles to receive adequate healthcare.

Nolte engages in a variety of activities both within and outside Native communities that aim to promote better health outcomes. He explains, “Good health can be a precondition to employment, which affects maximum employment, one of the Fed’s primary goals.”

It’s funny to think that Nolte’s job was originally experimental. “We weren’t sure if I’d be very busy,” he says wryly. Requests for Nolte to visit regions and arrange seminars and meetings have never stopped pouring in, and he travels to far points of the West to help remove barriers to employment. He’s assisted in forming health collaboratives in Hawaii, Alaska, and Washington that bring together health sector practitioners, community leaders, government, and nonprofits to address health disparities, and is helping to establish seven health collaboratives in Idaho.

Turns out, discovering what underserved communities need is often a matter of asking and then surfacing the right information. “Many communities are not aware of the resources that are available, especially some more rural isolated communities,” Nolte comments. For example, only 16 percent of U.S. tribes are participating in the Native American Direct Loan Program, which provides low-rate mortgages to Native American veterans. Nolte has held five workshops about the program and hopes to see an increase in participation as word gets out.

One project he is particularly proud of is his work with Washington’s Hoh Tribe, a Native American group that was nearly decimated by smallpox and remains starkly impoverished. It served as a model for Nolte’s work with other Northwest tribes.

“[The Hoh] wanted to promote ecotourism. They had a fire station that was partially built and not finished. A lot of people were unemployed. They didn’t have access to jobs because their cars were broken down and the bus system schedule made it next to impossible to work an 8-hour shift anywhere,” Nolte recalls.

After some research, he developed a seminar and returned to the Hoh reservation. “The program included the deputy director for the State of Washington Tourism Bureau. I also brought in the manager of a nonprofit fund that provided loans to Canada’s First Nations to provide advice on how a similar fund could be created by the Hoh Tribe. A guy from the Washington State Hospital Association talked about funding for needed defibrillators, and we had a government agency talk about funds available to finish that fire station. I also brought in the Jefferson County bus scheduling team to talk about the transit schedules. They rerouted the bus schedule so someone could walk up the hill from the reservation, catch a bus to work a full-time job, and come back to the reservation. I also brought in a nonprofit that ran shuttles for people to get to jobs,” he recounts with satisfaction.

On his best days, Nolte is able to use his resources and experience to do what he could not do on that day decades ago when he had to drive away from a reservation in need. And that makes it all worthwhile.

Craig Nolte retired from the SF Fed in fall 2022. We are so grateful for his contributions to the Bank’s mission and dedication to our work.