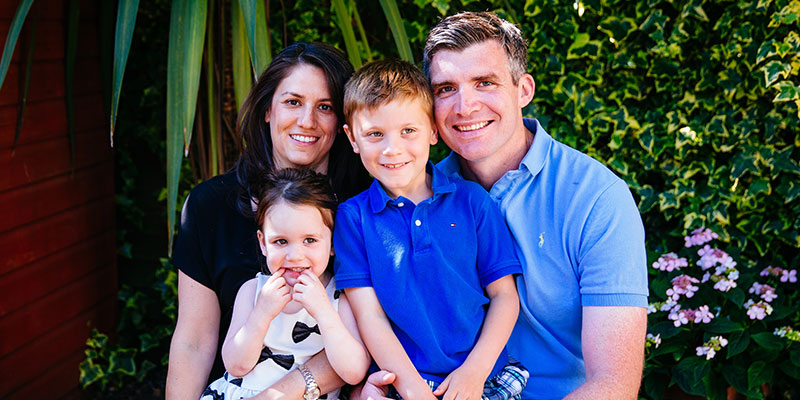 When Elizabeth Parrott joined Unidos in 2019, the tagline for the employee resource group (ERG) was “the Hispanic Network.”

She wondered, “Why the word “Hispanic?” That term refers to former colonies of Spain, rather than to Latin American countries and the people who come from those places. This terminology was problematic, in her eyes.

“You can compare it to ‘American’ and ‘British,’” says Elizabeth, a senior business relationship manager in ITS. “Americans share a kind of colonial relationship with the British, but nobody’s advocating we consider ourselves ‘Britons.’”

Elizabeth, who has Mexican roots, wanted to move away from a tagline that’s “all wrapped up in former colonial status.” So when she joined the ERG’s steering committee, she rallied members to vote for a change. The group agreed “Hispanic” had to go.

What to replace it with? Well, that’s still under discussion: some people like “Latino” and “Latina,” and others prefer “Latinx.”

Either way, Elizabeth’s push to take on weighty subject matter is characteristic of her time in the ERG—and now in her role as its leader.

Before joining the Fed, Elizabeth worked for two decades in investment banking and capital markets. She spent much of her career abroad at the London Stock Exchange and other financial services firms.

But after all those years she found that she missed her culture—she knew very few Latinos in London and was losing opportunities to speak Spanish.

Her family moved to the San Francisco Bay where Elizabeth became a consultant to investment banks and asset managers. Because she often handled massive amounts of data, she worked closely with programmers. She realized that though the programmers could quickly crunch numbers into useful analytics, they didn’t know much about banking. That got her thinking: What if she created the number-crunching programs herself?

She spent weekends teaching herself how to code, ultimately mastering the Python programming language. When she saw a job in the Fed’s ITS department in 2018, she jumped at the opportunity to combine her new tech skills with her financial experience. As a business relationship manager, Elizabeth supports and advocates for the strategic IT requirements of various business lines in the Bank. “To do my job effectively, I must learn about their goals and needs,” she says. “It’s a partnership where I learn from our business partners, I can bring what I know on the technical side of things.”

Getting involved at work

At first, Elizabeth wasn’t involved in any ERGs. She already spent her free time volunteering for various Latinx civic organizations.

But when one of the groups, the Latino Community Foundation, encouraged its volunteers to become more active at work, Elizabeth realized she could make a difference at the Fed as well. At the time, Unidos put on an annual celebration of Cinco de Mayo and a few other activities.

So she set about trying to understand the group and its culture. As a member of the steering committee, she began by connecting with members. Who were they, where did they come from, why did they join Unidos? She encouraged others to schedule calls with the group’s members to find out more about them.

“Unidos is one of the more diverse ERGs,” Elizabeth says, “because of its mix of hourly and salaried workers and the many countries of heritage they represent.” Because hourly workers have different work structures than salaried employees, she wanted to make sure to plan the group’s activities so that everyone could participate—this still remains a challenge.

Despite the challenge, Unidos is continuing to find ways to support mentorship, networking, and professional development for the group’s members, even during the pandemic. For example, as part of Unidos’ National Hispanic Heritage Month celebrations, Unidos is co-hosting an event this month that focuses on professional development for Latinx employees at the Fed, where Chair Powell will deliver the opening remarks.

In addition, Unidos is focusing on building awareness and education for Fed colleagues. “While Latinos make up 40% of California’s population, they are a largely invisible group,” Elizabeth says. “Unidos is striving to build that visibility, going beyond our food and music, but also sharing members’ stories and substantive topics like how we are represented at the Fed.”

Inspiring the next generation

The connection Unidos is forming with its members across the SF Fed’s branches has already proven fruitful. Police Services in the Phoenix Processing Center hosted students from a predominantly Latinx high school for a tour, and Unidos was invited to participate. They felt it would be a great opportunity for Unidos members to share their diverse career paths.

So several ERG members volunteered to talk with the students. Everyone had a different story. One speaker grew up in the Central Valley’s agriculture industry before attending Stanford. Elizabeth didn’t have great grades out of high school, so she went to community college before transferring to UCLA and then the London School of Economics.

“We talked about taking risks and making dumb mistakes,” Elizabeth says. “We wanted to emphasize to these kids who we are now isn’t who we started out as. There’s not a linear path.”

Last year Unidos went on its first offsite activity, to Leonard Flynn Elementary School in San Francisco’s Mission District. Volunteers hung out with first graders, playing basketball, coloring, and reading to them in English and Spanish. “It was really a great experience for everyone,” Elizabeth says.

Speaking of school, during the pandemic it’s unclear if students will be returning to the classroom. Unidos partnered again with Mosaic, and with the SF Fed’s Economic Education team, to buy Chromebooks for Latinx and Black students. Mosaic typically holds a fundraiser to buy backpacks, but the ERGs decided it would be more beneficial to provide computers for remote learning. Their goal is to donate 20 sets of computers, wireless mice, and mouse pads.

“It was great to work on this and to quickly adapt for our times,” says Elizabeth. “The change was instant, data-led, and it supports our community.”

To Elizabeth, being a leader of an ERG is an opportunity to bring her authentic self to work. And, now that she’s developed a bit of “grey hair,” she thinks she’s better as a leader than she would have been 20 years ago.

Take the “Hispanic” vs. “Latino/a” vs. “Latinx” discussion. Personally, Elizabeth prefers “Latino/a” because those are the terms she’s grown up with. She’s learned that the community is evolving, however, and uses the term “Latinx” when appropriate. An important principle that guides her approach is that the terms we use should reflect the audience’s preferences. “I also know that when you meet people where they are and when they feel like their voice has been considered, it makes for a more honest investment from them,” she says. “We can’t please everybody, but our members’ wants and needs come first in deciding what we do and how we do it.”