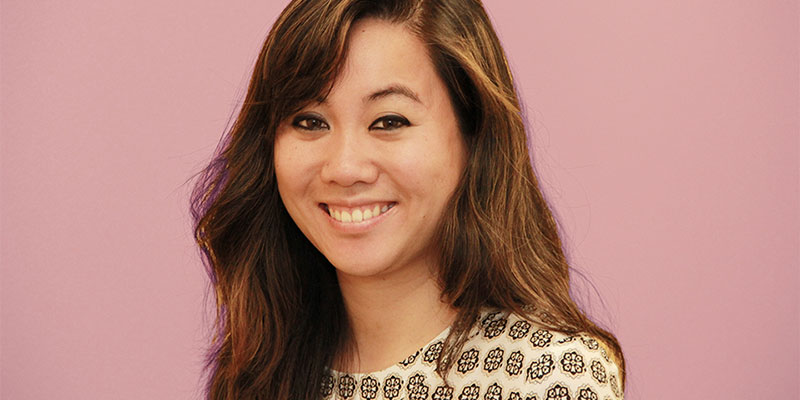 Around the World with the SF Fed’s Social Media Lead

She has two names: Ellen Chan in the United States, Chan Nga Yeen in Hong Kong. She speaks three languages. She could navigate the Hong Kong bus system independently by age nine. In her first few months at the Federal Reserve Bank of San Francisco, she helped create the Does College Matter? podcast series. And she’s pleasantly surprised to realize her journey to the SF Fed took her full circle around the world.

For Chan, moving to California to work at the SF Fed completed a circuit around the globe. She retains just a few memories of her early childhood in Alameda—flashes of playing in the grass and riding bicycles. That was before she turned seven and her family returned to Hong Kong. Life was different, and Chan didn’t always fit in.

“I read Judy Blume and Louisa May Alcott and attended a British school. Some people call it a ‘third culture kid’ where you’re sort of made up of multiple cultures,” Chan explains. When Hong Kong reverted to Chinese rule in the summer of 1997, nationalism surged, and the Chan family’s internationalism sometimes drew criticism.

Chan honed both her English and Cantonese, and worked on her Mandarin, spending her last two years of high school at the uber-competitive Chinese International School. Then it was off to the United States for college, a plan her parents had in mind since her California birth.

With a big, bubbly laugh, Chan explains, “I wasn’t really given an option. My parents said, ‘You’re an American citizen. You’re not going to the UK.'” Despite that, she considers her mom and dad fairly easygoing and open minded. When she got accepted to New York University, they didn’t tell her what to major in. “They told me to follow what I love to do and the rest will fall into place.”

On a whim, Chan applied to NYU’s Tisch School of the Arts and was accepted to the dramatic writing program. She spent four years writing screenplays, television scripts, and plays. But by the end, she realized writing wasn’t her calling.

“First and foremost I’m a reader,” she says.

That love of books led Chan to an undergraduate internship with publisher Simon & Schuster. After graduation, she returned as a marketing assistant in the children’s division where she worked with teachers and helped start a social network for teens. It was there Chan discovered a passion for education that she shares with her mother, who went back to college in her late 40s, obtained a Ph.D., and now serves as a college administrator.

Chan’s next career move was a stint doing marketing, sales, and web production for a New York podcasting startup (as a teen, she’d built websites for fun). She found herself regularly working fourteen-hour days, and was shocked when her boss and editor left the company shortly after she was hired.

“I went from the most junior person on the team to the only person on the team,” Chan remembers. She has a gift for seeing the upside of every situation, though, concluding, “But it was a great learning experience.”

Chan was enjoying New York life, working, and earning a master’s degree in communications media and learning technologies design at Columbia University when she decided to take on a new adventure by moving back to her birth state.

“I realized that I hadn’t taken very many risks in my career or in my adult life. I had to go for it,” Chan says about her decision to move across the country.

Chan collected her diploma and just two weeks after her arrival in California, she was invited to interview at the Federal Reserve Bank of San Francisco. She landed a job producing podcasts and managing social media for the SF Fed’s Economic Education and Outreach team where she was tasked with bringing the Bank’s learning resources to a broader audience.

“The Economic Education & Outreach team is an amazing close-knit group. Then you go online and there’s this passionate community of high-school and college educators. Everyone comes together in this very warm economic education social space,” says Chan.

Impressed by Chan’s work ethic and successes, the Bank tapped her to manage the @SFFed Twitter and Federal Reserve Bank of San Francisco Facebook accounts when a social media strategist position opened.

“Social media is essential to communicating our work around monetary policy, community development, and even financial institution supervision. It’s not always easy; there are a lot of people watching, from Fed supporters to reporters and skeptics. It’s my job to ensure we’re providing the public with our research and data, and doing it responsibly,” Chan explains.