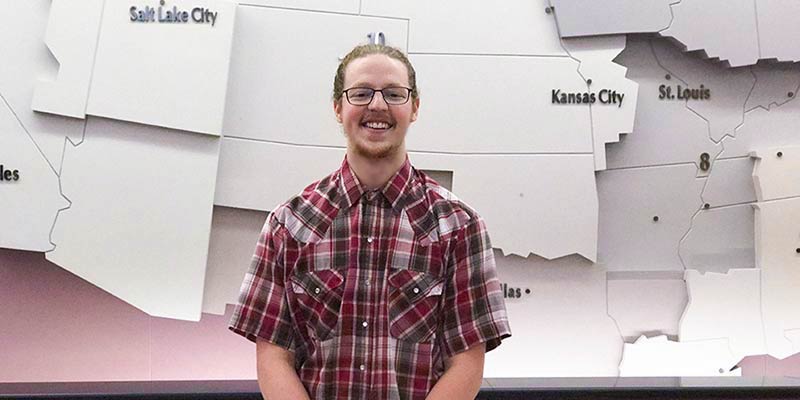 Following the Money, from Custodian to Cash Services in Salt Lake City

Garret Lund began his unlikely career at the San Francisco Fed as a custodian known for his easy smile and cheery disposition. When a job opened in cash operations at the Salt Lake City branch, he was asked to apply. Now he’s part of a tight-knit team responsible for keeping cash flowing throughout the 12th District.

“I work in all three areas in cash processing: high-speed, shipping, and receiving. High-speed is probably my favorite area. We run anywhere from 850,000 to 1 million notes a day,” says Lund.

In the high-speed area, a machine processes currency notes and rejects those unfit for circulation. Worn and torn notes are destroyed.

“Every day is pretty physical, lifting bundles that weigh about the same amount as a box of paper. At the same time, there’s a mental part. You have to mind your Ps and Qs and follow controls, accounting for every note,” explains Lund. “I always work with a partner and have someone attached at the hip. You have to keep an eye on them. Them on you. It’s stringent.”

But Lund describes the job as “anything but boring.”

“You’re always on your toes with things like audits, updated rules, workplace safety training, counterfeit detection training, and other certifications. You realize just how many security features are in those notes and learn how to create a better workflow,” he says.

“On these notes,” Lund says, “I’ve come across funny sayings. I’ve seen crispy notes that’ve been on bar walls and are so caked with nicotine you can barely run them in the machine. I’ve found defaced currency with drawings, like Batman George Washington.”

“We stay pretty upbeat. We all have our favorite online radio stations that we shuffle and get a mix going. Everyone has different tastes, so music’s a fun conversation topic. You learn a lot about people from what they like and don’t like,” Lund laughs.

So, how does someone transition from custodian to cash services? A positive attitude goes a long way.

“I didn’t talk much when I was a custodian. I just smiled. I guess people noticed. In September 2013, I was asked to interview, got hired into cash, and began working down in the vaults,” shares Lund.

During his interview, one thing stood out on Lund’s resume: his pharmacy tech license.

“The managers liked me and having a pharmacy tech license ended up being a big plus. Those skills apply to this job in a sense; understanding that things have to follow a certain flow and controls,” he explains.

Lund pursued a pharmacy tech career straight out of high school, inspired by his father who has multiple sclerosis (MS).

“My dad and I are really close. He’s my best friend. You never know how bad the MS will get and when, so I spend a lot of time with him. I actually became interested in pharmacology because I wanted to develop a drug to help his MS,” he shares.

“My family’s here and, even though I’m a gamer, I’m an outdoorsy person. I like to hike, fish, and camp, and Utah has a lot of mountains and canyons. I grew up on the west side of Salt Lake City near Kennecott Copper Mine and love Butterfield Canyon in that area. The view goes over the whole valley. Then there’s East Canyon. It’s all really scenic,” he says.

But Lund found himself competing for jobs in a very narrow market.

“There weren’t any jobs available that fit my experience level. Places either had no opening or required at least two years of experience. It was really tough,” he says.

Lund decided to take a custodian position at the San Francisco Fed to make ends meet while he figured out next steps. As fate would have it, that job became the path to a new career.

“My management is great. All of my teammates are awesome. It’s a really positive environment where everyone supports everyone else. We have this camaraderie. I cannot pinpoint a single person who I don’t deeply respect or who hasn’t helped me in a big way. They’re family. I know every person here would give the shirt off their back for every other person,” he says.

Lund sees himself sticking around and working toward a management position, and is open to opportunities in Salt Lake City and other branches. The Bank’s tuition reimbursement and mentor programs are available to help him achieve his goals.

“That’s one thing I love: there are a lot of things to help you progress. The best word to describe it? Opportunity.”