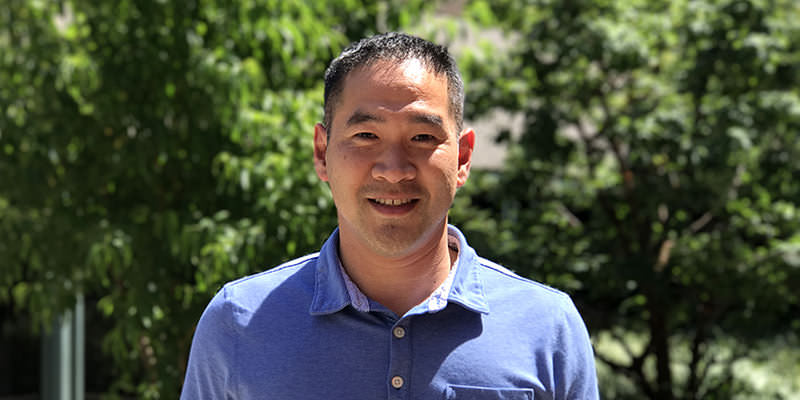 From Solo Road Warrior to Family Man: Jason Lew’s Journey within the Fed

As a bachelor, bank examiner Jason Lew found a sense of family with coworkers on the road.

“When I first started with the Fed, I spent weeks on the road at a time,” he explains.

It might seem like a lonely life, traveling from bank to bank throughout the 12th District, but Lew remembers the after-hours fun he had with his close-knit teams of six to eight colleagues.

“There were a few of us that worked on the same group of banks. Our typical process involved a couple of weeks to scope an exam. Then we’d have a couple of weeks on the road and few weeks to write up our conclusions and issue a report. During that time, I developed some really strong relationships within the Bank. One of my coworkers and I were literally on the same jobs for nine straight months, and she’s now one of my best friends,” he explains.

“We did a lot as a group. Once a group of us went to watch Wicked. We’d go to movies after work. Dinners. You build relationships when you’re out on the job. I loved being on the road and couldn’t imagine life without the travel,” he remembers.

Little did Lew know that just a few years later, he’d happily give up the travel and be part of a loving family of eight spread across two households.

It was on a bank exam trip in Utah that a new relationship started, one that would transform his life completely. Lew met a man and a long-distance relationship blossomed. Then an opportunity came up for a transfer to the Federal Reserve’s Salt Lake City branch, and the continuity of maintaining his role as a bank examiner with the Fed helped ease the transition.

“The Fed was great, so it wasn’t like I was dropping everything to start a whole new life,” Lew says.

Lew moved in with his partner, Brandon, and became a de facto stepfather to Brandon’s daughters, ages 3, 7, and 10. Brandon also had a fourth daughter on the way, and when the new baby arrived, Lew got the chance to experience parenting from day one. The jolt of instant parenthood was eased by a positive relationship with the children’s mother.

“I get along very well with my partner’s ex. We’ve run marathons together. We travel together,” says Lew.

The big blended family built condos next door to each other so their children could move back and forth between the two households at will, and they take annual vacations together as a group. Though Lew thrived as a father, a role he’d always aspired to, going from bachelor to stepfather of four took him “from zero to 60” in the blink of an eye.

“My first Christmas was probably the biggest shock, with just how many presents we had,” he says. The son of Chinese immigrants further explains, “Coming from an Asian culture, Christmas wasn’t as celebrated. That was huge.”

Other culture shocks included being one of the few Asian people in his new community. But there’s been less friction than one may expect, and Brandon’s tight-knit extended family has welcomed Lew with open arms.

“Brandon’s family was really supportive. All of his siblings live within 10 miles of each other. We have Sunday dinners. It’s a completely different dynamic than most Californians are used to,” he says.

Once settled in the Salt Lake City area, Lew was promoted to compliance risk coordinator at the SF Fed, a position requiring the expertise he’d gained examining banks but far less travel.

“I especially enjoy the consumer protection aspect of the job. There’s some public good to it,” he shares.

Since getting off the road, Lew still participates on exams, albeit less frequently. He noted that “Although I only participate on a couple of exams a year, it seems like I always get to participate in the more interesting ones. There’s never a dull moment in the world of bank exams.”

He welcomed the change of pace, which allowed him more flexibility in attending to his kids. Lew and Brandon added a dog to the family and then a son via surrogate. As the family has grown, group family vacations have continued.

“We still fit in a big minivan, all eight of us,” he says.

Lew and Brandon also took their two oldest girls to Paris last year, and he wants to continue the new tradition of taking kids on special trips in smaller groups. He’d also like to add California to the family’s holiday travel schedule to visit Lew’s parents living in Sacramento.

Now that his oldest stepdaughter is attending college, beginning what Lew has calculated will be 22 years of tuition payments, the two households have sold their townhomes and are moving into houses a few miles apart.

With a small grin, he simply describes the move as “the next phase of our life.”