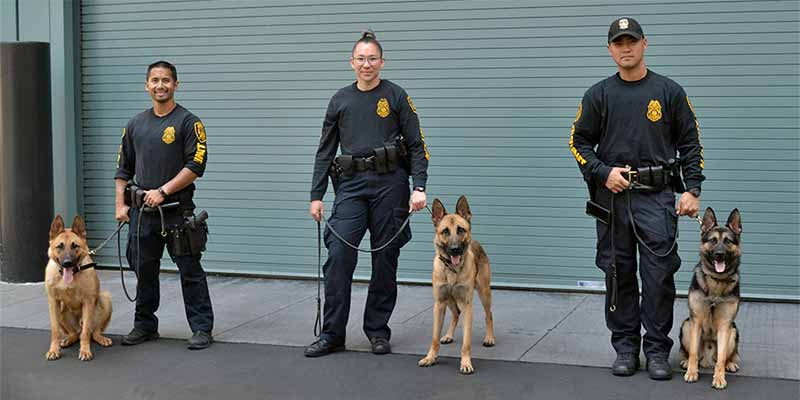 On the Job with the SF Fed’s Explosives-Detection Dogs

The most important skill for life with a working dog? Balance.

The word comes up again and again when the three newest San Francisco Fed K9 handlers talk about patrolling by day and bringing the dogs into their homes at night.

There’s the balancing act between training the dogs to be obedient and empowering them to act independently. For safety reasons, police dogs must be unquestioningly obedient. But the Fed’s three K9s are all explosives-detection dogs who receive more nuanced training. This training began months before the dogs came to the Fed. Officers and their dogs participated in three weeks of all-day classes when they first met and training will continue throughout their careers.

“For detection dogs, you want your dog to self-explore, not sit back and worry about what the handler wants. They have to know what their job is and know how to search,” says Devera.

There’s the balance between helping Fed employees feel comfortable having a canine coworker and taking advantage of the intimidating appearance of the German shepherd-Malinois mixes.

Still, it’s a change for employees who were used to seeing the Bank’s previous K9, Nora, a cuddly-looking black lab. She was very good at sniffing explosives but didn’t intimidate. The new K9s look fierce, but most of the dogs also love to be stroked. Their handlers often allow petting as long as people ask first and the dog isn’t busy.

Perhaps the trickiest balancing act of all is the relationship between handler and by extension, their households.

All three K9 officers knew they were entering a commitment of many years when they applied for and were accepted into the K9 program. Dog and handler spend most of their workday together. The dogs live in the handlers’ homes, so they ride to work and go home together. After retirement, the dogs will live out their remaining years with the officers.

It’s a relationship that the handlers describe as even closer than family. That means devoting the best care to the dogs, whether it’s taking them to the vet or bathing them on weekends, or exercising them to make sure they stay in top form for work.

Yet, they emphasize, it’s a lot more complicated than the relationship between a pet and its owner. They studied for months before meeting their dogs, learning to hide scented items for training. They continue to train regularly, learning new ways to interpret the dogs’ signs.

“We put a lot of trust in these dogs. We expect the best out of them,” says Romans.

Devera explains the cognitive dissonance required to maintain a working relationship with an animal who is with you nearly 24/7. “I think of him as a work tool, like my gun. At the same time, I love that dog.”

All three officers are lifetime dog lovers, which can make the balance all the more challenging. Yoon admits that he talks to Cash while he drives, and on the rare day that Cash isn’t with him, he finds himself looking for him.

“You want to spoil him as much as you can,” Yoon says. “Give him all the love, feed him whatever he likes. But there’s a line you have to keep.”

Home life varies for K9 officers, based on the family situation and the dog’s temperament. Romans’s dog, Echo, is somewhat aggressive. Yoon’s dog, Cash, loves to cuddle and play after work. Devera’s dog, Maui, is in between.

“As a roommate, Echo keeps me on a strict schedule; eat, play, sleep, repeat,” says Romans, who recognizes her dog’s strong personality. “I don’t play fetch with Echo. He plays fetch with me,” she laughs.

Their time off is often spent outdoors together. “Echo enjoys our weekend adventures all over the Bay Area to places like Linda Mar beach.”

Cash, who works at the Los Angeles branch, hit it off with Yoon’s 6- and 9-year-old children from day one. But having a work dog in a family setting comes with some unique rules. The kids don’t play ball with the Cash. Ball play is a reward for successful scent detection during training. Chasing, which can over-excite the dog (and kids), is also off limits.

Maui’s introduction to Devera’s kids was more gradual. When Maui first saw the kids, he growled and showed his teeth from inside his crate.

“We slowly got him used to the kids by letting them feed Maui out of the palms of their hands,” he says. Now the kids and dog get along, and the kids help with obedience training by running around the backyard, providing distractions to challenge Maui’s focus.

All three K9s spend most of their days alternating between training and inspecting deliveries that come into the San Francisco and Los Angeles branches. Real explosives are rare, although Cash once alerted Yoon to a water delivery truck that was dangerously leaking propane. To keep the dogs on their toes, the handlers must perpetually challenge them by hiding inactive explosives in different environments.

The K9s express one thing quite clearly: They love to work.

The dogs are now certified in detecting nine specific explosive odors by the California Narcotics Canine Association which trains and certifies both narcotic and explosives-detection canines.

Visiting the Bank? K9 handlers request that people always ask permission before approaching or petting one of the San Francisco Fed K9s, and never feed the dogs any treats. They appreciate your cooperation.