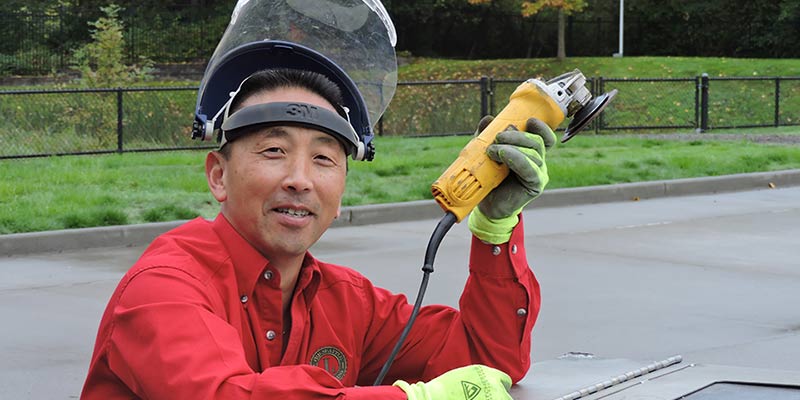 Facilities engineer Kiyo Dickerson grew up in the Seattle, Washington area, where he moved from Japan when he was 13 years old.

“I don’t remember a whole lot about growing up in Japan, really. It’s a blur to me. Middle school, high school, all of that was here,” he says.

He does remember the circumstances leading up to the move: his parents’ divorce when he was 11 years old. As an only child, Kiyo often felt lonely. He began proposing being adopted by his paternal aunt and uncle.

“I had been very close to my aunt—my father’s sister—and her family. She was married to a U.S. serviceman stationed in Japan, and they had three kids of their own. As I got a little older, I thought, wouldn’t it be nice to live with this family with three other kids?”

The family talked it over and when Kiyo was 13, everyone agreed he would benefit from being adopted. He admits becoming a big brother was a bigger change than he expected.

“Let me tell you, that was a shock. I spent 13 years getting pretty much everything I wanted as an only child. All of a sudden, I’m the oldest of four kids. My perspective changed,” he says wryly.

Soon after the adoption, Kiyo’s adoptive father received orders to move back to the States. The family packed up and headed to Washington.

“I moved to the United States in 1976. I was in eighth grade and spoke very little English. Thrown into that mix, it was sink or swim. I had to speak English to go to school, so I had to learn, but luckily the best way to learn a language is when you have to use it,” he says.

A fortuitous fall into a career in facilities

Numbers always came easily to Kiyo. He took several accounting classes after high school, but had little interest in the peripheral classes needed to pursue a degree. In the early 1980s, unsure of which career path he wanted to follow and looking for a job, Kiyo landed in the mail room at the San Francisco Fed’s Seattle branch.

“I started as an entry-level, hourly mail clerk. Several months later, I became lead mail clerk on the swing shift. Next I was a janitor for a year or so. Then I became a facilities engineer when a position became available. The rest is history,” says Kiyo.

Facilities turned out to be the perfect fit.

“I’ve always enjoyed working with my hands, and having a bit of aptitude helped. I’m very fortunate that the Bank decided to take a chance on me,” he says. “As of January 2020, I’ve been at the Fed for 36 years.”

Back when the Seattle branch was still downtown, facilities staff were almost like in-house contractors. Engineers were tasked with everything from constructing new offices to painting. Kiyo loved it all.

“I enjoy any kind of construction work, and we’d build out new offices from scratch. Some people would whine about having to paint, but I love to paint. Anytime I can do something and see a result when I’m done is a go-to project for me. It’s important to me to physically see and touch what I do and to experience what I’ve accomplished,” he explains.

Since the Seattle branch moved to Renton in 2007, Kiyo’s focus has been to keep operations running smoothly.

“My workday starts at 4:15 a.m. because high-speed cash processing starts at 5 a.m. My colleague Don Gulas and I need to be here when the machines start up. We go through all of the equipment to make sure everything’s running as it should. Typically, we don’t have issues, but if something fails or has a problem, we have a little time to troubleshoot. If it can’t be fixed right away, we can switch over to our redundancy system to ensure operations can start on time,” he explains.

On a typical day, four facilities engineers are onsite, inspecting equipment and lighting, and fulfilling work orders for preventative maintenance. They also take phone requests and help anyone who stops them in the hall.

“I like the variety of things we get to do; it’s not the same thing every day,” he says.

Over the years, Kiyo has often turned to Don as a mentor.

“Although I’ve been here slightly longer, Don joined the department with several years more experience. His organization, skills, and work ethic are inspiring. He’s my partner in crime and work spouse. We’ve worked side-by-side for so long, we’ll hand each other tools before the other reaches for them,” he says.

Doing what needs to be done

Kiyo is known to jump in and do whatever it takes to get things done. For example, when the facilities supervisor in Seattle departed when the branch was preparing to host a meeting for all of the Federal Reserve Bank presidents, Kiyo stepped in.

“Maybe it’s just the way I’m wired. We had facilities engineers but no supervisor to steer the ship. I saw what needed to be done and did my best, with my colleagues, to accomplish the tasks at hand such as to get ahold of a contractor or call managers and executive officers,” he says.

Kiyo talked over his plans with regional manager Rich Sloane and was given the green light to run with them.

“There’s a difference between things you shouldn’t do and things you don’t have to do. In this instance, there were a lot of things I didn’t have to that still required attention. I felt it was far more important to get them done than ask, ‘Whose job is this?’ and wait,” he explains.

Kiyo’s peer honored him with a 2019 e3 Award for his efforts. It’s a recognition that he extends beyond himself to the entire facilities team in Seattle.

“We function and succeed as a group. I was very flattered to receive the e3 Award but it felt somewhat odd to receive this recognition without the rest of the team. I am a tiny little cog in this gigantic wheel. There is nothing I can do and do well without my colleagues’ help. So, big shout out to Don, Dave Busko, Mark Moore, our new supervisor Joe Pozniak, and Rich,” he says.

Kiyo continuously focuses on becoming a person he’d like to work with: decent, thoughtful, selfless, responsible, reliable, and accountable. All lessons he learned from his late son Joshua, who passed away in 2012 at the age of 18 following a three-year battle with cancer.

“I realize that I was and still am a very proud parent. Even on the worst of his days, Joshua could find an awareness and energy deep within him to ask others, ‘How are you doing? Are you okay?’ To me, this was the ultimate display of selflessness. I marvel at the wisdom of that kid and aspire to be as selfless as he was,” Kiyo shares.

Kiyo often reflects on his son’s down-to-earth and good-humored personality, and uses it to shape his own empathy.

“He was matter of fact. It impresses me that he saw things so clearly and was able to prioritize. He was incredible. For whatever reason, he managed to stay positive. In the big picture, I try to live up to his expectations. When it comes to Josh, I always think, okay, how would he handle this? Would he be laughing at me for acting a certain way in this situation?”

Today Kiyo and his wife focus on simple joys, like spending time together outdoors, both at home and riding their bicycles.

“I love to tinker around the house, and my wife and I work together in the yard. We make trips to the nursery all the time. Much of our time is spent back there during nice weather, so we do our very best to make it enjoyable. In the morning, we’ll drink coffee and turn on the water fountain, and just sit and relax,” he says.

Once, Kiyo completed the two-day, 206-mile Seattle to Portland (STP) bike ride, billed as the largest multi-day biking event in the Pacific Northwest. But he admits preferring a more laid-back experience.

“I like to ride everywhere and anywhere. My wife and I like to go to take the ferry to the islands here in Washington—Vashon Island, Whidbey Island, Orcas Island. She doesn’t like urban bike riding, but I do. I think it’s a kick to ride along with the cars and pass them by when they’re stuck in traffic. We’d love to take our bikes overseas to Europe and ride and travel a bit. There are still so many places in this country and overseas we’d like to see,” he says.

While they plan their adventures, Kiyo will continue ensuring the Seattle branch is a great place to work.

“We’re the people behind the curtain. You may not see us in action, but when you walk into our facilities and you’re in a pleasant and comfortable place to accomplish your tasks, we’ve accomplished our goals.”