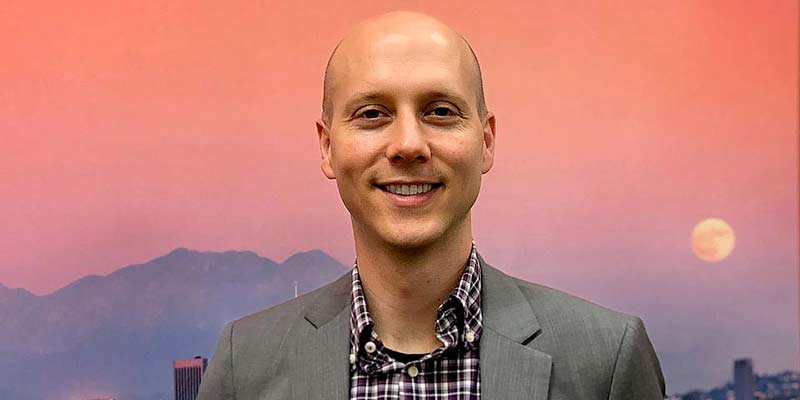 Quarter-Life Crisis Leads to a Sweet Spot in Statistics

New opportunities seem to pop up at exactly the right times for Lawrence Drew. It’s not luck. He simply believes kindness and competence are equally important.

“The reason I am where I am? I’m good to other people and other people are good to me. Success comes from hard work and dedication, but mostly from living the Golden Rule: If you treat people well, they’ll be good to you in return,” he says.

Growing up in the Southeast, manners and respect were ingrained in Drew. He remained in the region through college, attending the University of South Carolina. Although a strong student, he struggled to find a direction.

“I began as a computer science major but discovered that I didn’t really want to do computer science, and lab fees were $50 a semester. So, I switched to math,” he says.

After graduation, career opportunities were scarce. Drew moved to Chicago with his future best man, where kindness from an acquaintance got Drew’s Federal Reserve career started.

Drew was working at a credit union that serviced employees of the Chicago Fed and started making friends. One day, one of those friends gave Drew what he thought was a holiday card. It was actually a job description and encouragement to apply to the Chicago Fed’s Reserves unit. He decided to apply, got the job, and began working with financial institutions on their reserve accounts.

Experiencing crazy lake effect winters and hanging out with a fun crowd, Drew was having a good time living in Chicago. Even with a great job, though, he still felt like he hadn’t found himself professionally.

“I was thinking, what do I want to do with my life? Let me quit my job and figure it out,” he says. “I call it my quarter-life crisis.”

That quarter-life crisis coincided with the financial crisis.

“My last day at the Chicago Fed was three days after Lehman collapsed. I couldn’t find a job for a while,” he recalls. He embarked on a period of wandering not unfamiliar to many twenty-somethings, moving home to South Carolina, then back again to Chicago.

Then he found a job with the Fed’s Board of Governors in Washington, DC, working on financial reports.

His time at the Chicago Fed helped inform his new role.

“My perspective from the Federal Reserve Bank of Chicago gave me a better understanding of how analysts and management perceive questions from the Board. It helped shape how we approached a Reserve Bank,” Drew explains.

He might have happily spent the rest of his career working for the Board of Governors, except that he fell in love with Northern California.

“I visited once on vacation, and I really liked it, so I decided I wanted to move out here,” Drew says.

He watched job listings for the San Francisco Fed, and sure enough, a job opened that would be perfect for him, as an analyst in the holding company unit. He was still working on financial reports, but more detailed and complex ones. He loved the challenge.

In seven years of working at the San Francisco Fed, Drew has remained in a similar role. He’s gradually taken on more responsibility, been involved in projects for the Federal Reserve System, and has trained others.

Although a reorganization moved him from the holding company unit to its sister domestic and international financial reports unit, Drew’s work still focuses on assuring the quality of reports filed by financial institutions. Drew and his team search reports for errors, make sure all the right information is included, and field question from institutions and the Board.

“A lot of errors we find may not be considered significant, but our findings help improve the processes and controls at those institutions. They also improve the downstream data accuracy and trust in the Fed’s data,” Drew says.

Having found challenging work that fascinates him, Drew realized that he wanted to study accounting. With the Fed’s tuition assistance program, he went back to school, earning a master’s degree in accountancy from Golden Gate University.

Although it was a time crunch to attend classes and study at night, he found attending school while working to be synergistic.

“I was able to put a lot of the things I learned into practice immediately,” he says.

The degree has continued proving its worth every day.

“My understanding of financial reports has expanded. My ability to communicate with financial institutions has improved immensely. I can more speak their language, not only the Fed’s lingo. My degree also expanded my ability to analyze reports, to see where data are connected and what it means,” Drew enthuses.

He finished his degree just in time for his nights and weekends to be filled with a new responsibility—his wife gave birth to their first child just before his last semester’s final exams.

Between saved vacation time and parental leave, Drew was able to spend four months home with his son; two months right after the birth, and two more months after his wife’s maternity leave ended.

Those final two months of flying solo with the baby were invaluable for bonding. “It definitely helped connect me with my son. I took him on hikes every day,” he says.

Although they loved living in San Francisco, having a baby made the couple realize that they needed to be closer to family. Drew informed his managers that he and his wife planned to move back to the Southeast. He didn’t know if he’d be able to keep his job, but he was hopeful.

“In the spirit of experimentation, and because they value the work I’ve done and expect me to continue providing value, I’m able to work remotely from home in the same role,” Drew says.

Drew and his family moved to Charlotte, North Carolina, in the summer of 2018, and so far, it’s working out great. The baby is getting to know his grandparents. Drew’s wife works for a non-profit as a corporate giving officer in Charlotte.

While he genuinely enjoys the flexibility, Drew is mindful not to let his arrangement become too flexible.

“There is ample chance for distraction or to be too focused and work too much. Finding balance has been key,” he says with a smile, grateful for the opportunity.