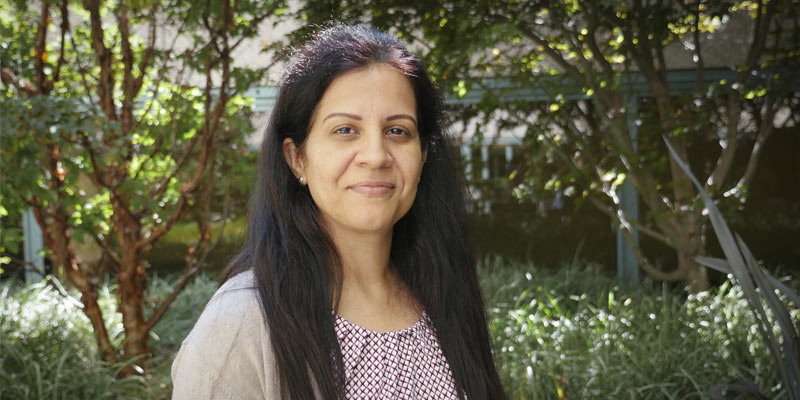 Practicing Agility on Big Data Projects and In Life

Growing up in Delhi, India, Monica Batra thought she’d end up in front of a classroom one day.

“I wanted to become a teacher. Then I thought, ‘Okay, I can be a professor. They have better earnings,'” she says.

By the time Monica had to think about university studies, all her friends were talking about India’s booming tech field.

“It was a new career opportunity. Everybody thought, ‘this is the future.’ It seemed like the right time to explore the space, so I entered the IT world,” she says.

Monica got her undergrad degree in mathematics in Delhi. Then she moved to Hyderabad, southern India, to do her master’s degree in computer science. She feels lucky that her family supported her ambition and sense of adventure. “I was fortunate to have parents who were very open minded,” she says. “They were like, ‘Okay, you want to do something different. Even if you want to stay away from home, it’s fine. You can choose what career you want.'”

Monica scored a job with a well-known global networking giant straight out of college. Then she spent two years in software development before moving to the United States.

“My husband was working in the U.S. at that point, so I moved to join him. I worked at startups for a few years and then at a major telecom before joining the San Francisco Fed,” she explains.

The move was a dream come true in many ways.

“When I was young, I told my parents I wanted to travel to different places. My parents were encouraging. They would say, ‘You’re independent. Make your decisions and go travel wherever you want.’ Now I tell them God must have really listened since I traveled for my studies and then to the U.S.”

Contract to hire in under 3 months

Monica began working in Internet Technology Services (ITS) at the San Francisco Fed in 2005. She joined as a contractor and converted to full-time just three months later.

“I started as a senior application developer on a Treasury project, working with around 30 people,” she recalls. “Most of the companies I’d worked with before in the U.S. were in startup mode, so this was a different kind of environment.”

One thing she noticed immediately was that employees stuck around a long time at the SF Fed, sometimes 20 or 25 years. That was a huge difference compared to the private sector, where developers in the San Francisco Bay Area tended to job hop every three to four years. Now she gets it. “There are enormous opportunities to learn and upskill,” she says, “and the adoption of new technologies is constant. I’ve been so fortunate. I stay competitive with developers in the Bay Area.”

She also has a much better life-work balance as a working mom.

“In other jobs I was on 24/7. There wasn’t a point in the day where work ends, and your personal life starts. Here, we put in a lot of work but it’s more scheduled. If I work on my personal time, it’s to learn new technologies. Mostly, I get to spend time with my family and that’s very critical,” Monica explains.

Today Monica is a senior data engineer working on advanced data analytics capabilities. Basically, she’s the go-to subject matter expert on all big data technologies at the Bank. And she’s well-respected for her technical development skills and as a strategic architect tackling the Bank’s big data challenges.

Sincere and willing to roll up her sleeves to get the job done, Monica received an e3 Award in 2019, a peer-nominated honor. Her recognition called attention to qualities Monica often overlooks in herself.

With all her accomplishments, Monica remains incredibly humble. Her response to winning an e3: “I was totally surprised. I really thought I was just doing my job. You’re supposed to help people.”

Clearing up confusion through collaboration

Data mining and data aggregation can be frustrating for end users, and Monica adeptly eases those stresses. For a recent project, she was tasked with onboarding folks across the Federal Reserve System onto a new data platform.

“We introduced a lot of patterns and practices, and the process to onboard had specific steps to follow. We had to make sure that the solution being developed followed best practices end-to-end,” she says.

Monica’s team made sure everyone understood the new processes and technologies, educating their stakeholders about the power of the new platform. By the end of the onboarding process, everyone on the project was clear on how the platform made ingesting and working with high-volume data sets easier.

“You have to closely engage and be available. People appreciate when you can quickly respond to questions and address issues,” she says. “Our team is highly motivated and excited to make projects a success, and you need to make that happen across different time zones and different personalities.”

She doesn’t mind when there’s a little stress in the mix, saying, “It can bring a good energy if we’re all in the same mode.”

Adopting agile and never looking back

Many of Monica’s work habits were developed in 2012, working on a Treasury project.

“We were going to use the agile methodology. Agile is a set of values and principles that provides a foundation for teams to make decisions that result in better software development,” Monica explains. “Agile was very new at the Federal Reserve at the time. We had a distributed team and the Bank brought in agile coaches. I just love the way efficient processes were adopted with lean and agile methods.”

To Monica, the project felt seamless, with everybody ready to learn and adopt new technologies.

“Because our team is distributed, we were already used to working remote. We’d have our daily scrum over a video call to exchange ideas. Our tools made it so easy to communicate. The best part: no emails whatsoever. Everyone was accessible. We even had product owners sitting right there with the team during core hours. Even remote, it worked beautifully. You could talk directly to them. There was no confusion. No communications gaps or emails going back and forth to flush out requirements,” she says.

One of the most important lessons Monica learned from the agile coaches was about mindset.

“You cannot put yourself only in a certain role. So, you cannot say you just do development work, or deployment, or testing. You have to care about it all. That really empowered people to say, ‘I am not just doing this one part; I need to know what’s happening end-to-end.’ The team got exposure to automated testing, regression testing, integrating testing—such efficient processes. And everybody engaged in learning, contributing, and collaborating.”

This also helped with the Bank’s response to the COVID-19 pandemic and shifting most employees to remote work. “I did not have any issues collaborating with other team members while working on a project. Tools like Skype, Microsoft teams, and WebEx enable easy collaboration across teams.”

Throughout it all, Monica makes it a point to detach from projects.

“I have two boys. One is a freshman in high school and the other a freshman in college. I’ll ask them what’s going on in their school lives or if there’s anything that needs our attention. When I’m with them, I don’t want to think about anything else,” she says. “I also don’t give up on my exercise routine. It’s not every day, but I do a couple Bombay Jam classes or cardio classes. I can close my brain, be there, and enjoy the moment.”

She knows the work will be waiting for her, and that’s okay because a lot of her motivation is on the job. “I like the working environment. I like my peers,” she says simply.