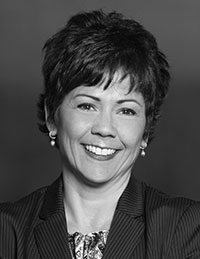 Seattle, Washington – The Board of Governors of the Federal Reserve System has appointed Sophie Minich, president and CEO, Cook Inlet Region, Inc. (CIRI), to the Seattle Branch board of directors. The appointment was effective September 1, 2015. Ms. Minich was appointed to provide insights on her respective business sector and offer observations on the economy.

Ms. Minich joined CIRI in 1993, shortly after graduating from the University of Alaska Anchorage with a degree in finance. She has held various positions of increasing responsibility and was appointed to her current position in January 2013.

Ms. Minich is on the board of the Anchorage Economic Development Council as well as a Trustee of Alaska Regional Hospital, and CIRI Elder’s Trust. She’s also a member of the Great West Division Board of the American Cancer Society.