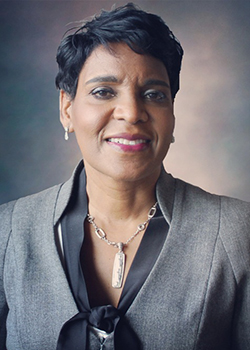 In her 37 years with UPS she has managed areas that span West to East Coast. In her current role she ensures that UPS provides the logistical capabilities to support new business in Northern and Central California, and Northern Nevada. Her territory includes the metro areas of Bakersfield, Oakland, Reno, Sacramento, San Francisco, San Jose and Santa Barbara.

Ms. Turner is also actively engaged within the community. She serves as the vice-chair for the Comcast Diversity & Inclusion Council, the board of directors for the Silicon Valley Leadership Group, and is a member of the Bay Area Council executive committee and co-chair of the Council’s transportation committee. Ms. Turner is the president of the Loyola Marymount University African American Alumni Association. She is also a member of the board of trustees for Pacific Region Boys & Girls Club. She earned a bachelor’s degree in Accounting at Loyola Marymount University in Los Angeles and a Certification in Total Quality Management at Cosumnes River College in Sacramento.