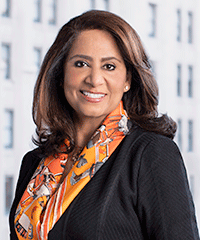 Ms. Bakhshi is president and chief executive officer of Bank of the West and co-chief executive officer of BNP Paribas USA Inc., and also serves on both organizations’ boards of directors and executive management committees. Bank of the West is a financial services company headquartered in San Francisco, with $96.3 billion in assets as of September 30, 2020, operating a network of retail, wealth, commercial and business banking branches and offices in 24 states. The organization has nearly 10,000 team members serving 1.8 million customers.

Ms. Bakhshi joined Bank of the West in June 2016. She has formed a strategic vision for Bank of the West based on sustainable finance, diversity, and being part of a banking group with global capabilities and reach.

During her more than 30-year career, she has held leadership positions at TD Bank, Washington Mutual (now JP Morgan Chase), FleetBoston (now Bank of America), and First Data (now Fiserv). Ms. Bakhshi serves on the Supervisory Board of The Clearing House; the Board of Directors of Grameen America; the Board of Directors of the U.S. India Strategic Partnership Forum (USISPF); and is a member of the Pacific Bankers Management Institute Board of Directors at the Pacific Coast Banking School (PCBS). She holds a master of arts from Jadavpur University and a bachelor of arts from the University of Calcutta.

The Federal Advisory Council, a body created by the Federal Reserve Act, consists of one member—generally from the commercial banking industry—from each of the 12 Reserve Bank Districts. The council ordinarily meets four times a year with the Board of Governors in Washington, D.C., to discuss economic and banking matters. Members customarily serve three one-year terms.