This Economic Letter examines the causes and the consequences of the sharp decline in the U.S. personal saving rate, and whether there is reason to expect that it will remain low. An understanding of these issues requires a look at how the personal saving rate is constructed, and how it is affected by the household’s perceived need to accumulate wealth to meet its future consumption needs.

How is the personal saving rate measured?

The most frequently cited measure of the personal saving rate is based on the National Income and Product Accounts (NIPA). It is constructed by forming the ratio of Personal Saving to Disposable Personal Income (DPI), where DPI is defined as Personal Income (including wage and salary income, net proprietors’ income, transfer payments less social insurance, income from interest and dividends, and net rental income) less tax and nontax payments to governments. Personal Saving is found by subtracting from DPI total Personal Outlays, 97% of which consists of Personal Consumption Expenditures (including consumer durables), with the remainder composed of Interest Paid by Persons (individuals, nonprofits, and trust funds) and Net Personal Transfer Payments to the Rest of the World. Given that personal saving is determined as a residual in the NIPA, measurement errors that appear anywhere in the computation of DPI or Personal Outlays will cumulate in personal saving.

In constructing the NIPA, the U.S. Commerce Department’s Bureau of Economic Analysis (BEA) treats consistently the flow data associated with current production. As a result, the NIPA personal saving rate gives an incomplete picture of household savings behavior. For example, the NIPA measures of income and savings exclude the sale of or change in the market value of existing assets. For financial assets, personal income does include dividend and interest income to persons, but excludes capital gains and losses. Therefore, the recent volatility in the stock market would not show up as changes in personal income and would not be included in the NIPA measure of personal saving. For nonfinancial assets of households, primarily housing and consumer durables, the NIPA includes service flows from housing as consumption, but treats expenditures and not service flows from consumer durables as consumption. Similarly, personal expenditures on education and training are treated as consumption. These accounting practices overstate consumption and understate saving.

Measurement errors can have a large effect on the saving rate. For example, in June 2001, the BEA substantially revised upward its estimate of the U.S. personal saving rate. Under the old accounting, the average monthly saving rate for the twelve-month period June 2000 through May 2001 was -0.6%, including a string of eleven consecutive months of negative saving. Under the new accounting, the saving rate averaged 1% during that period and was positive throughout. That sizeable upward revision was largely due to changes in the measurement of wage and salary income of employees covered by unemployment insurance (see U.S. Department of Commerce 2001, p. 24). Another example is the 1998 revision in the NIPA’s treatment of distributions from mutual funds, in which distributions resulting from capital gains that were formerly treated as personal income were instead added to corporate profits. While this had no effect on national income, it lowered personal income, with the average saving rate for 1995-1997 falling from 4.3% to 2.8%.

Why has the NIPA personal saving rate fallen?

Many recent studies of the decline in the personal saving rate focus on the other side of the coin, the consumption boom. That is, why has consumption as a percentage of disposable personal income been so high? 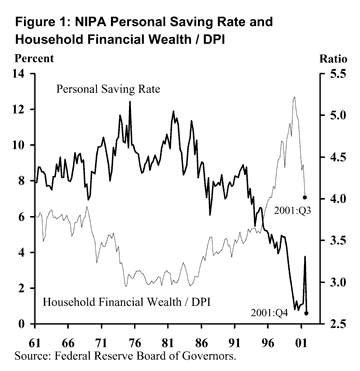 One explanation involves the “wealth effect,” in which increases in the real value of assets stimulate consumption (see, for example, Dynan and Maki 2001 and Maki and Polumbo 2001). For example, in Figure 1, the steep rise in the financial wealth of households beginning in the mid-1990s—which was principally due to the soaring stock market—is almost a mirror image of the falloff in the personal saving rate. Some argue that capital gains should be added to personal income, thus raising household savings and increasing the measured saving rate (see Gale and Sabelhaus 1999). Households’ wealth also includes tangible real assets, which constitute about one-third of their total asset holdings. The principal component of tangible assets is real estate, representing approximately 80% of the total. Like the stock market, housing prices also have appreciated, thus adding to household net worth and contributing to the decline in the personal saving rate. However, unlike the stock market, housing prices have not experienced sharp declines since the stock market peaked in April 2000, and this has mitigated to some extent the drop in household net worth that accompanied the subsequent stock market decline. From 2000:Q2 to 2001:Q3, total assets held by households (financial and tangible) fell 7%, while total net worth declined by 10%. The largest contributing factor to these declines was a 15% fall in the market value of the financial assets of households. During this period, the personal saving rate ceased its sharp decline but did not reverse course. This suggests that, while all of the dynamics of the wealth effect on consumption have yet to play out, other factors also may have contributed to the low personal saving rate.

Another explanation for the sharp decline in the saving rate is associated with the coincident rise in labor productivity in the latter half of the 1990s. If households perceive that the higher labor income associated with this rise in productivity will continue into the future, then their permanent income, or the present value of future expected income, has increased, thus mitigating the need for additional saving out of current income. This argument would be consistent with the continued strength in aggregate productivity that has been in evidence in the data even during the current economic slowdown, when productivity improvements generally tend to fall off.

A third explanation is that financial innovation has relaxed liquidity constraints that many households had been facing by increasing their access to the credit markets. This argument is consistent with the observed increase in consumer credit relative to GDP that has accompanied the consumption boom. While this could be a significant contributing factor, the evidence put forward does not indicate that this is the principal factor propelling the consumption boom (see Parker 1999).

Will the low personal saving rate persist, and is it a cause for concern?

One concern that has been expressed over a low personal saving rate is that it may cause national savings to be insufficient to support the level of investment necessary to sustain a high level of long-run economic growth without excessive dependence on foreign capital. However, when savings by businesses and government are added to personal saving, this measure of aggregate gross saving as a percentage of GNP is estimated to have been 17.2% in 2001:Q3, which is likely to have been the nadir of the current recession. This figure is only moderately lower than the post-World War II average of 19.2% and is not out of line with previous dips in the quarterly series.

Some concern also has been expressed that an unusually low personal saving rate may pose problems for the economy in the short run, if it were to be quickly reversed, thus representing fundamental behavioral instabilities in the economy. Such a view would be consistent with the notion that households have imprudently financed the consumption boom by running up an unsustainable level of consumer debt. Consider, for example, that the principal strength of the U.S. economy during the current recession (apart from housing) has been the remarkable resilience of household consumption. Had there been a sudden unpredictable reversal of the personal saving rate, then by definition, consumption would have fallen, which could have significantly exacerbated both the depth and duration of the recession.

However, substantial empirical evidence to date suggests that to a large extent the low personal saving rate in the U.S. economy is a systematic response of households to changes in its fundamental determinants, most notably the increase in financial wealth. Had the stock market appreciation of the 1990s been the sole reason for the low personal saving rate, its decline would also portend weaker consumption. However, this effect would likely be spread out over several quarters, as some estimates of the wealth effect on consumption suggest (see, for example, Dynan and Maki 2001). Moreover, it may also be the case that a lower personal saving rate will be a feature of the U.S. economy for the foreseeable future. This persistence could be attributed to an increase in trend productivity that induces higher permanent income for households or to a relaxation of financing constraints due to financial innovation. To the extent that these factors are important, the current low personal saving rate would not represent a problem that is overhanging the U.S. economy, but is instead a manifestation of a more efficient deployment of the economy’s resources.

Maki, Dean M., and Michael G. Polumbo. 2001. “Disentangling the Wealth Effect: A Cohort Analysis of Household Saving in the 1990s.” Finance and Economics Discussion Series 2001-21, Board of Governors of the Federal Reserve System. http://www.federalreserve.gov/pubs/feds/2001 (accessed March 2002).