Predicting When the Economy Will Turn

Are turning points in the economy—recessions and recoveries—hard to predict? Recent experience may not tell us much: although almost no forecaster predicted the onset of the latest U.S. recession, unusual forces may have been at work this time around. But what about more typical recessions? And what about recoveries?

In this Economic Letter we discuss some research on forecasters’ ability to predict the onset of recessions both in the U.S. and abroad. The evidence is that it is extremely difficult to predict when recessions will begin. The evidence on the other turning point in the business cycle—a recovery—suggests that it is easier to forecast, a finding that is encouraging in view of the widespread prediction that the U.S. economy will emerge from recession this year.

At one level, it is not too surprising that most forecasters missed the onset of the last recession. While the economy had been sluggish since the spring of 2001, GDP growth did not turn negative till the third quarter of 2001. Quite possibly, GDP would not have dropped in the absence of the September 11 attacks. As Chairman Greenspan stated in a recent speech “…before the terrorist attacks, it was far from obvious that this concurrent [worldwide] weakness was becoming self-reinforcing.” In this case, it is not hard to understand why few predicted the beginning of the recession: there was simply no way to predict what would happen on September 11.

Did forecasters have better luck predicting previous recessions? In a recent paper, Fintzen and Stekler (1999) note that the last three recessions were “…not recognized even as they occurred, …[though] the forecasts did indicate that the economy was slowing down.” Nor does this inability to predict recessions appear to be a recent phenomenon. Looking at an earlier, longer sample period, Zarnowitz (1986) concluded that major “…failures of forecasting are related to the incidence of slowdowns and contractions in general economic activity. Forecasts…go seriously wrong when such setbacks occur.”

The recent economic history of a single country contains only a limited number of recessions, which means that we are unlikely to have a data set that is large enough for reliable statistical inference. A recent study by Loungani (2001) overcomes this problem by pooling data from a relatively large number of countries.

The data used in the study are from the publication Consensus Forecasts, which has provided macroeconomic forecasts for industrialized countries since 1989. Over time, it has added publications that cover Latin America, the Asia Pacific region, and Eastern Europe. Each publication surveys a number of prominent financial and economic analysts; the published forecasts are used by multilateral institutions (such as the International Monetary Fund) as well as by national governments.

Pooled data on 63 countries are used to study the forecast of annual average real GDP growth through 1999. The study focuses on forecasts made in April and October of each year. By April, a “settled” estimate of real GDP growth for the previous year is available in nearly all countries, and this information can be incorporated in the current year forecast; similarly, by October, data for about half a year are available. For each of these months, both the forecast for this year and the next year are included in the analysis.

The sample contains 72 episodes of “recession,” which is defined as any year in which real GDP declined. It turns out that as of April of the previous year, the consensus was for positive growth in 70 of the 72 episodes (the only exceptions were Russia and Ukraine in 1996). By October of the previous year, the forecast was still for positive growth in all but four cases; however, in many cases the forecast had been revised down substantially over this period, suggesting that forecasters were beginning to sense trouble ahead. By April of the year of the recession, a downturn was forecast in a little over a third of the cases. By October of the year of the recession, the consensus forecast predicted a recession in 50 out of 72 cases. 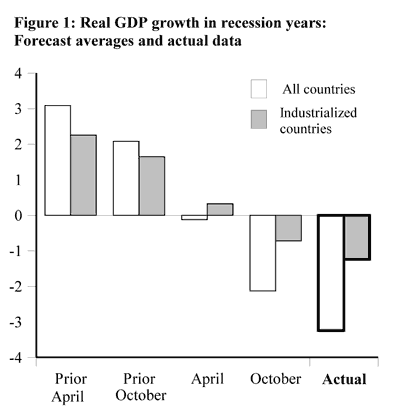 Figure 1 provides evidence on the size of the average error for both the full sample and a subsample of 26 industrialized countries. Consider, first, the results for the full sample. In April of the year before the recession, the average forecast was a little over 3% growth. This forecast had been reduced to 2% by October, and to essentially zero by the year of the recession. These downward revisions imply that forecasters were aware that a slowdown was in progress, and by October the forecasts did catch up with the reality of recession. However, on average, the magnitude of the predicted decline in output underestimated the actual decline by about 1 percentage point. The results for the industrial country subsample tell a similar story; we will return to the industrial country data below.

Why do forecasters not call recessions? Analysts have put forward a number of (sometimes related) explanations, some of which stress the inherent difficulty of the forecasting exercise, while others stress the role of the incentives that the forecaster faces. For instance, it has been suggested that forecasters don’t have enough information in real time to make accurate forecasts. Another explanation is that macro economic models are designed to work well “on average,” but that they break down during unusual times such as recessions. A related explanation is that recessions are rare events, so that predicting continued expansion constitutes a safe strategy for the forecaster. It also has been suggested that customers dislike pessimistic forecasts. Gary Shilling, a private forecaster, stated in an interview with Euromoney magazine that “Most economists are paid to be cheerleaders. Whistle-blowers are unemployable” (Smalhout 2000). Yet the available evidence is that private sector forecasts are no worse than those made by multinational institutions, and it is unlikely that private and public sector forecasters have the same incentives.

Among the set of explanations that focus on the role of incentives, one explanation for which there is some statistical evidence is that forecasters prefer to cluster around a common forecast rather than issue an “outlier” forecast. Using a data set for three countries including the United States, Gallo, Granger, and Jeon (forthcoming) show that an individual forecaster’s predictions are strongly influenced by the consensus forecast of the previous month. This “imitation” behavior can sometimes lead the consensus forecast towards convergence to a forecast value that is far from the target (actual) value. 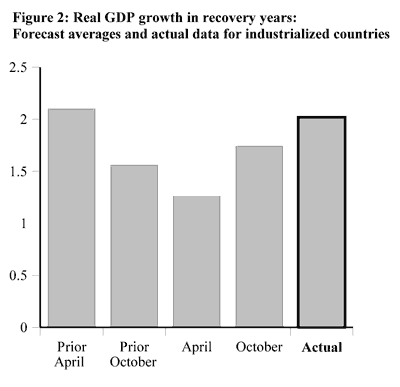 To illustrate how the consensus forecast evolves around a typical recession, one can look at what happened in the U.S. in the early 1990s. In January 1990, the consensus forecast called for 2.5% growth in 1991; predicted growth stayed above 2% until Iraq’s invasion of Kuwait, after which it started to fall. By the start of 1991, the forecast was for a modest recession that year, and it stayed that way till the end. What is relevant for our purpose is the behavior of the forecasts for 1992 that were made during 1991: these remained almost unchanged at 2.5%. The forecasts for 1992 made during the course of that year showed more variation, but never came close to forecasting a continuation of the recession. Since the economy did recover in 1992, the forecast error was small.

This pattern turns out to be quite typical of the way that forecasts change over a recession. Underlying it is the assumption that the recession will last under a year, which turns out to be correct most of the time. Some statistical evidence that is consistent with this assumption is discussed in Diebold and Rudebusch (2001), who point out that in the postwar U.S. data, recessions are more likely to end as they grow longer. (By contrast, they find that the probability that an expansion will end does not go up with the age of the expansion.)

It doesn’t take long to figure out that this assumption will lead to trouble in the face of a recession that lasts longer than usual. The U.K. recession of 1991-1992 provides an example. The forecasts for 1991 exhibit a gradual decline that reflects the recognition that a recession is underway. However, the forecasts for 1992 (which turned out to be the second year of the recession) made in 1991 continued to reflect the belief that it would be a normal (i.e., nonrecessionary) year throughout. It was only in mid-1992 that the realization set in that a multiyear recession was underway. Thus, the assumption that the recession would last only one year led forecasters to make unusually large errors in 1992. It turns out that this pattern of forecast errors is typical of other multi-year recessions in industrialized countries, though it needs to be kept in mind that the data set only contains a limited number of multi-year recessions.

The available evidence suggests that recessions are hard to predict, in part because they are a result of shocks that are themselves unpredictable. Moreover, the incentives facing forecasters may be such that they prefer to hide in the herd rather than issue outlier forecasts.

In industrialized countries, most recessions in the recent past have lasted under a year. Forecasters have, therefore, tended to do well by forecasting recoveries in the years that follow recessions. Of course, this strategy has not worked in those cases where recessions have gone on for well over a year. But because multi-year recessions have been a rare occurrence, predicting a recovery in the year after the onset of a recession remains a good bet.

*The views expressed in this letter are those of the author(s) and do not necessarily represent those of the Federal Reserve, the IMF, or IMF policy.

Gallo, Giampiero, Clive Granger, and Yongil Jeon. Forthcoming. “Copycats and Common Swings: The Impact of the Use of Forecasts in Information Sets.” IMF Staff Papers.

Loungani, Prakash. 2002. ” ‘There Will Be Growth in the Spring’: How Credible are Forecasts of Recovery?” Forthcoming, World Economics 3 (January-March).