Have the Fed Liquidity Facilities Had an Effect on Libor?

In response to turmoil in the interbank lending market, the Federal Reserve inaugurated programs to bolster liquidity beginning in December 2007. Research offers evidence that these liquidity facilities have helped lower the London interbank offered rate, a key market benchmark, significantly from what it otherwise would have been expected to be.

A major component of the current financial crisis has been the turmoil in the interbank lending market, which banks use to fund their day-to-day operations. The dislocation in this market has been especially dramatic for the term London interbank offered rate (Libor), one of the most widely watched money market benchmarks. Spreads on Libor of different maturities relative to yields on comparable U.S. Treasury securities spiked sharply as financial market conditions unraveled in the summer of 2007, reached a peak in mid-September 2008, and have since fallen back.

In a recent Economic Letter, Kwan (2009) described the behavior of Libor spreads during the financial crisis. He noted that the Federal Reserve had introduced a number of liquidity programs, in particular the Term Auction Facility (TAF), to make funds available to financial institutions and ease the stress in the interbank market. However, researchers disagree whether these facilities worked to bring down interbank rates, such as Libor, or whether other factors explain the downward interbank rate trend.

This Letter examines how Fed liquidity programs have affected interbank rates, drawing on recent research by Christensen, Lopez, and Rudebusch (2009). The Letter first explains how TAF works. Then it describes how a dynamic model that simultaneously prices Treasury bonds, corporate bonds, and Libor contracts provides evidence concerning the impact of TAF and other liquidity facilities on interbank rates. This analysis shows that, since the announcement of TAF and other government actions, spreads between Libor of different maturities and comparable Treasury yields have been notably lower than what would otherwise have been expected during most of 2008 and early 2009. 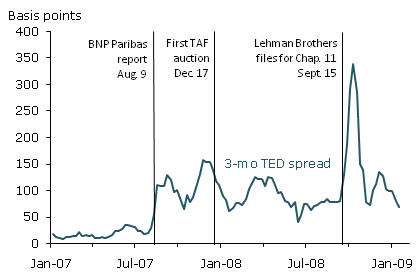 The gap between Libor rates and rates on Treasury bills, which are widely regarded as risk-free, is known as the TED spread. The three-month TED spread, which compares Libor and Treasury rates of that duration, is one of the most commonly followed measures of conditions in the interbank market and the relative appetite for, or aversion to, risk on the part of market participants. On August 9, 2007, the TED spread spiked (Figure 1) after the French bank BNP Paribas reported that it was having trouble valuing certain mortgage-backed securities due to serious impairment of liquidity for such instruments. This prompted financial institutions to worry about both their own ability to raise funds and the liquidity of counterparties in the interbank market. The result was a persistent increase in the relative cost of bank funding, as evidenced by elevated TED spreads. The Fed responded by easing terms on discount window lending to depository institutions and introducing TAF in December 2007, followed later by other liquidity facilities.

TAF’s goal is to provide liquidity to the banking system by allowing banks to borrow for periods of 28 or 84 days using less-liquid and harder-to-value assets as collateral. The program operates as a single-price auction open to sound depository institutions eligible to borrow at the discount window. In principle, TAF alleviates stress in the interbank market through two primary channels. First, banks that borrow through TAF worry less about their own liquidity, which might make them more willing to lend to other banks. Second, the fact that other banks also have access to TAF funds ought to make lending banks less concerned about the liquidity risk of counterparties in the interbank market.

A key question is to what extent TAF and other liquidity facilities have actually helped ease conditions in the interbank market, as measured by reduced TED spreads. To measure the impact, we need to control for variations in Treasury yields and in the risk premiums priced into bank debt. Both of these can cause shifts in the TED spread unrelated to the effects of Fed liquidity programs.

To assess the effects of central bank liquidity operations, Christensen, Lopez, and Rudebusch developed a dynamic model that prices Treasury yields, yields on bonds of financial companies, and Libor. The model includes six “latent” factors that are not directly observable, but must be inferred from underlying interest rate data:

The data used include Libor rates on loans maturing in three, six, and twelve months, and yields on a selection of investment-grade zero-coupon bonds of U.S. financial institutions with maturities ranging from three months to ten years. The sample also includes yields on Treasury securities with maturities from three months to ten years. All data series are weekly, covering the period from January 6, 1995, to January 16, 2009.

Figure 2
Difference of Libor factor relative to its historical average 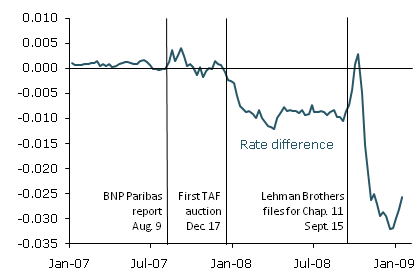 Figure 2 illustrates the estimated path of the Libor factor, which compares Libor movements to those of the bonds of AA-rated financial institutions. The deviations of this factor from its mean reflect the difference between Libor and yields on such bonds. In the 12 years prior to the credit crisis, this factor tended to revert to the mean rapidly, indicating that deviations between Libor and yields on bonds of AA-rated financial institutions tended to be traded away quickly. However, following the introduction of TAF in mid-December 2007, the historical relationship between Libor and those bond yields broke down as the dynamics of the interbank market abruptly changed in response to central bank intervention. The Libor factor fell well below its historical average, reflecting a big drop in Libor rates relative to yields on the financial institution bonds. The factor stayed below its historical average until mid-September of 2008, when Lehman Brothers filed for bankruptcy.

The Lehman bankruptcy temporarily eliminated the Libor factor’s unusual behavior. One interpretation is that investors took this event as a signal that banks would not be given any further extraordinary government assistance, which caused Libor rates to shoot up. But subsequently, government programs, including a significant expansion of TAF, the $700 billion Troubled Asset Relief Program (TARP) aimed at stabilizing banks, and the Federal Deposit Insurance Corporation’s Temporary Liquidity Guarantee Program (TLGP), helped stabilize the financial system. As Figure 2 shows, in the wake of these measures, Libor fell dramatically compared to AA financial bond yields, and the Libor factor shifted even more sharply away from its historical average than when TAF was first introduced.

The effects of policy actions such as the announcement of TAF on Libor can be analyzed within the model. By fixing the Libor factor at its historical average prior to the introduction of the Fed’s liquidity programs, we get a path that indicates what the three-month Libor and TED spread would have been had Libor stayed in line with AA-rated financial bond yields and continued to reflect the liquidity and credit risk premiums priced into those financial institution bonds. 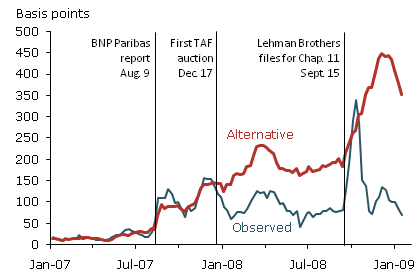 Figure 3 shows the three-month TED spread since the beginning of 2007 along with the alternative path reconstructing what the spread would have been without government liquidity programs. From the start of TAF until the Lehman bankruptcy filing, the effect averaged 93 basis points. However, Figure 3 indicates that government initiatives following the failure of Lehman Brothers substantially lowered TED spreads from what would have been expected had yields in the interbank market reflected the same risk spreads as rates prevailing for bonds of highly rated financial institutions of comparable maturity. From the end of October 2008 to January 16, 2009, the differential between the observed and the alternative spread in Figure 3 averaged about 300 basis points. In determining why the TED spread narrowed, in addition to TAF expansion, the TLGP began protecting newly issued debt of eligible financial institutions. That provides further evidence that much of the sharp drop in the TED spread after mid-September 2008 was due to reduced credit risk in the term interbank credit market.

Other studies also have examined TAF’s impact on Libor. McAndrews, Sarkar, and Wang (2008) look at TAF auctions through the end of April 2008. They found evidence that announcements of TAF auctions tended to narrow TED spreads. However, the authors calculate that, on average, the overall effect was less than indicated in Figure 3. On the other hand, Taylor and Williams (2009) found TAF’s effects insignificant over the first three months of 2008. Both of these studies control for financial institution credit risk by using five-year credit default swap rates of the banks in the sample used to fix Libor. By using a proxy for variation in credit risk that covers a relatively long horizon, the studies do not capture the movement of short-term credit spreads. Those short-term spreads tended to move up faster than long-term credit spreads during the period of analysis.

The Fed introduced TAF in mid-December 2007 to alleviate turmoil in the interbank market. An in-depth analysis based on a six-factor model suggests that TAF may have helped reduce the TED spread for the first eight months of 2008. The failure of Lehman Brothers in mid-September 2008 temporarily eliminated those gains. But, following extensive government initiatives since then, including significant TAF expansion, the three-month Libor rate has again fallen to a level considerably lower than what it otherwise would have been.