Did Welfare Reform Work for Everyone? A Look at Young Single Mothers

Since Congress overhauled the U.S. welfare system in 1996, single mothers between 18 and 24 have reduced welfare dependency, increased workforce participation, and registered gains in household income. The group’s growing attachment to the labor force means they may be better positioned to take advantage of unemployment insurance during the current recession.

Passage of the Personal Responsibility and Work Opportunity Reconciliation Act (PRWORA) in 1996 marked the most far-reaching reform of the U.S. welfare system since the 1930s. Advocates for low-income groups, front-line service providers, and many policymakers expressed serious reservations about the legislation. Their concerns largely revolved around how the movement from Aid to Families with Dependent Children (AFDC), a cash transfer system with no time limits, to Temporary Assistance for Needy Families (TANF), a work-based program with strict time limits, would affect the household incomes of the target population of impoverished single mothers. But fears that families headed by single mothers would sink deeper into poverty turned out to be unfounded. Following the reforms, welfare caseloads declined rapidly, and employment and household incomes of single mothers rose. Importantly, these improved outcomes largely survived the challenges posed by the 2001 recession, suggesting that the initial successes were not simply due to a booming economy.

Now, more than a decade after passage of the legislation, policymakers and academics alike view welfare reform as a success. Few experts question whether the reform accomplished its stated goals of moving single mothers into the labor market and keeping them out of the cash welfare system. (See Blank 2006 and Moffitt 2008 for excellent reviews of the literature evaluating the success and failures of the reforms.) Although employment and income data point to the overall success of welfare reform, important questions remain, including the extent to which aggregate improvement may hide problems among important subgroups. In other words, how much does the experience of the average single mother accurately reflect that of more vulnerable single mothers, such as those with serious barriers to employment? This issue is especially critical now that we are in a deep economic recession. Research has shown that such downturns can have disproportionately negative effects on those least attached to the labor market (Hoynes 2000).

In this Economic Letter we examine how one particularly vulnerable group, young single mothers age 18 to 24, fared in the aftermath of welfare reform. We choose this group because they may face especially difficult challenges in finding employment due to low educational attainment and lack of work experience. Yet data show that, like the broader population of single mothers, single mothers in this age group had lower welfare dependency, greater workforce participation, and higher household income in 2004 than they did prior to welfare reform. Although it’s still too early to judge, recent work indicates that this increased attachment to the labor market has also given these young women increased access to an important safety net—unemployment insurance.

The Aid to Dependent Children program was created in 1935 by the Social Security Act. The original intent of the program was to provide a social safety net for impoverished mothers whose husbands were absent due to death or abandonment. The program was created on the premise that mothers with young children should not be expected to work. In many states benefits were reduced dollar-for-dollar for any earnings, removing the key incentive to take jobs.

For its first 30 years, the program remained relatively small and captured little public attention. By the late 1960s, however, AFDC rolls had begun to rise, boosted by an inflow of mothers who had never been married and may never have worked. Meanwhile, in sharp contrast, married women with young children were moving into the labor market. The change in the composition of welfare recipients and the growing acceptance of working mothers put a spotlight on the AFDC program, prompting two decades of policy and academic research on how to better integrate poor single mothers into the workforce. (For an excellent review of the pre-welfare reform research see Moffitt 2003.)

Despite considerable efforts to modify the AFDC system to encourage work and reduce lifetime dependence, caseloads continued to rise and recipient outcomes continued to deteriorate. In 1996, PRWORA was passed, completely replacing the AFDC system with TANF, a new state-based, work-oriented program. Key reforms included shifting control of federal funds to states while requiring states to meet federally determined goals such as employment targets, imposing a five-year lifetime limit on benefits, and requiring beneficiaries to perform certain kinds of work, look for a job, or receive vocational training within two years of enrollment in order to continue qualifying for aid.

The average effects of welfare reform 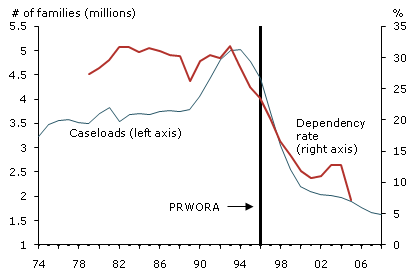 PRWORA’s passage came after a long and nearly continuous decline in welfare caseloads had already begun (see Figure 1). Even before PRWORA, states were experimenting with some of the incentives and limits that would eventually shape the law. As the figure shows, these state initiatives began reducing caseloads as early as 1994. As the number of beneficiaries declined, so did welfare dependence—the proportion of individuals living in families receiving more than half of their total annual family income from TANF, food stamps, or Supplemental Security Income (U.S. DHHS 2008). The decline in broader welfare dependence suggests that the reduction in welfare caseloads was not due to mothers shifting to other government programs. These positive aggregate statistics spurred considerable research on PRWORA’s long-term effects and on the economic well-being of single mothers more generally. In general, the research corroborates the good news suggested by the aggregate trends. After PRWORA, single mothers worked more and had higher net earnings, higher family income, and lower rates of poverty (Moffitt 2003, 2008 and Blank 2002, 2006).

Although the average effects were positive, it should be asked to what extent reforms benefited all subgroups of single mothers, including those with significant hurdles to employment. We focus on one such vulnerable group: young single mothers age 18 to 24, the vast majority of whom have never been married, have less than a high school education, and little or no work experience. We use data from the Annual Social and Economic Supplement of the Current Population Survey (March CPS) to examine their labor force behavior and economic well-being. We compare the experiences of these very vulnerable single mothers to single mothers age 25 and older, and to women age 18 to 24 who are not single mothers.

Figure 2
Percent who worked at least 30 hours per week 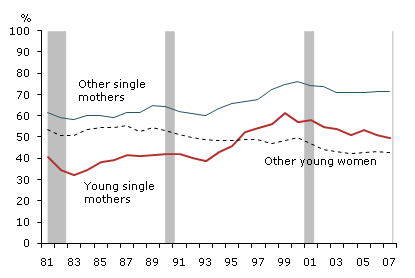 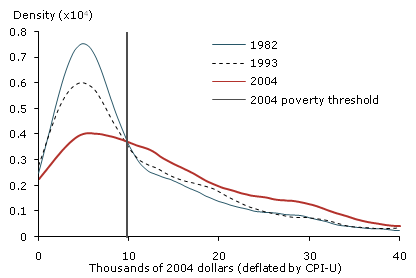 The increased employment of young single mothers shows they were able to find alternatives to welfare to support their households. An important question though is whether these income sources offset the loss in AFDC benefits. To answer this, we use a statistical process known as kernel density estimation, which allows us to track changes in the distribution of household, size-adjusted income over more than 20 years, a period during which three recessions occurred. We compare 1982, 1993, and 2004, which were business-cycle income trough years for the population as a whole. Figure 3 shows the results. In 1982 and 1993, young single mothers were heavily clustered at the low end of the income distribution curve. This is consistent with very limited growth—and often outright declines—in the real value of benefits over time. But by 2004, income distribution had moved significantly to the right, and young single mothers were less likely to have incomes below the poverty threshold.

The evidence presented above suggests that welfare reform has made even the most vulnerable single mothers economically more self-sufficient and that this pattern continued during and after the 2001 recession. Welfare caseloads continued to fall throughout that downturn, possibly because industries such as retail sales and health care, which employ many low-skilled women, remained relatively strong (Blank 2006).

In the current downturn, it’s natural to worry that families headed by single mothers may suffer economically. Single mothers will undoubtedly experience higher unemployment, like other workers. But recent research (Isaacs 2005) suggests that their growing attachment to the labor market better positioned them to fall onto a different part of the social safety net—unemployment insurance—during the 2001 recession. Although recent unemployment data for low-income single mothers are not yet available, we believe trends for this group should be monitored, given their implications for the well-being of single mothers and the long-term viability of the reformed welfare system.