Inflation Expectations and the Risk of Deflation

Predicting the course of inflation is one of the most important challenges facing monetary policymakers. Useful aids to such prediction are the measures of expected future inflation obtained from prices in government bond markets. An examination of recent inflation-indexed and non-indexed U.S. Treasury bond yields suggests that financial market participants believe that the probability of prolonged deflation has become fairly small.

Inflation as measured by the consumer price index (CPI) has declined rapidly and even turned negative since the peak of oil and other commodity prices in mid-2008 (see Figure 1). In light of current high unemployment and prospects for a slow recovery, the question of whether deflation will continue is of critical importance to policymakers. 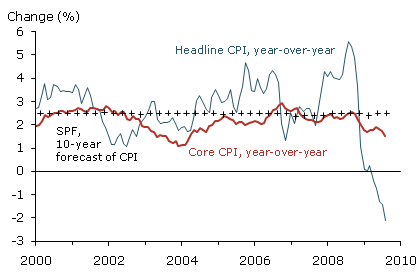 In episodes of sustained deflation, as prices fall, the buying power of cash increases. That gives an incentive to consumers and businesses to postpone spending. The resulting downward pressure on economic activity tends to reduce output and employment. Thus, persistent deflation is inconsistent with both parts of the Federal Reserve’s dual mandate to promote maximum employment and price stability.

Given recent negative rates of inflation and the substantial slack in the economy, it is essential that monetary policymakers develop accurate tools for analyzing deflationary risks. Such tools must include ways to measure the extent to which expectations of deflation are taking hold. One method is to examine inflation forecasts from such sources as the Survey of Professional Forecasters (SPF). As shown in Figure 1, the SPF 10-year CPI forecast is still positive at 2.5%. Based on this measure, deflation risk appears small. However, the SPF inflation forecast has changed very little over the past decade—even when the U.S. economy fell into the recession. This raises questions about the survey’s usefulness as an indicator of deflation risk over the short to medium term.

As an alternative, measures of the inflation expectations embedded in yields of government bonds are particularly interesting. First, they are available daily for a wide range of maturities, eliminating the lag inherent in quarterly surveys. Second, they reflect the actions of investors who actually put money on the line based on their views about inflation. This is important in the current situation because the vicious circle of greater expectations of deflation and postponed consumption and investment only gets started if people act on those expectations.

This Economic Letter analyzes inflation expectations and deflation risk by looking at differences in yields between standard Treasury bonds, which are not indexed for inflation, and Treasury inflation-protected securities (TIPS), which are indexed. Stated another way, such an analysis provides a means of measuring differences between nominal and real Treasury yields of the same maturity, which yields important information for measuring inflation expectations. Such an examination suggests market participants believe that the probabilities of deflation at the one- and five-year horizon are currently small. But at the peak of the credit crisis in the fall of 2008, bond investors believed that deflation risks were quite high.

Inflation-indexed debt securities differ from the usual non-indexed debt securities in that their principal is adjusted for changes in a specified price index. Such indexation protects the purchasing power of the principal. Common price indexes include the CPI, which is based on a consumption basket of goods and services. Inflation-indexed securities guarantee that the adjusted principal at maturity will have the same power to buy items in the consumption basket as when the security was originally issued.

Inflation-protected securities are a relatively new phenomenon in the United States. The Treasury Department only started issuing TIPS in 1997. TIPS are indexed to the non-seasonally adjusted CPI, which is released monthly by the Bureau of Labor Statistics. TIPS indexation lags by three months, so that the adjustment in, say, December is based on the CPI value in September. Figure 1 illustrates the end-of-month year-over-year change in the non-seasonally adjusted CPI since 2000. The sharp decline in the CPI since mid-2008 is clearly visible. Currently, the year-over-year change in the CPI is negative for the first time since 1955. The change in the core CPI index, which excludes volatile food and energy prices, is also included in Figure 1. The core CPI has declined much more modestly than the full index during the past 12 months and remains positive at 1.5% as of September 2009.

A frequently overlooked feature of TIPS is that, at maturity, the holder is repaid the greater of the inflation-adjusted principal or the original par amount at issuance. This creates important protection against both inflation and deflation. When net inflation over the life of a TIPS bond is positive, the investors get the full inflation-adjusted principal. But, when net inflation is negative, they get the original principal. Given the current low inflation, the value of the deflation protection is likely to have gone up recently.

A model for measuring inflation expectations

To measure inflation expectations, I construct a model based on price differences between unindexed Treasury securities and TIPS of the same maturities. (This is the same model described in Christensen, Lopez, and Rudebusch 2008 and Christensen 2008.) The model is based on the yield term structures of the two kinds of securities, that is, how yields vary over different time horizons. I then assume that unindexed Treasury securities and TIPS are arbitraged—that market participants trade both kinds of securities in ways that they believe will make returns equal. To equalize returns between inflation-adjusted and non-adjusted bonds, investors must project a certain level of inflation. In this way, the model measures inflation expectations over different time horizons. Using the model, it is straightforward to calculate how market participants assess the likelihood of deflation over any given time horizon. 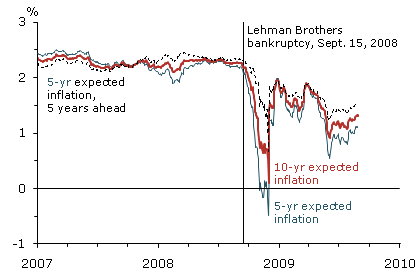 The data I use are unindexed Treasury yields observed daily from January 3, 1995, to August 28, 2009, with maturities ranging from three months to ten years. For TIPS, I focus on yields since the beginning of 2003 when liquidity in the TIPS market started to be comparable to that of the regular Treasury bond market. The sample of TIPS yields is daily from January 2, 2003, to August 28, 2009. Maturities range from five to ten years to minimize any effects related to the lagged inflation indexation. To demonstrate how the model can be used in real-time policy analysis, I re-estimate the model each day, adding the previous day’s observations to the sample.

Figure 2 illustrates expected rates of inflation at the five- and ten-year horizons derived by the model. (The model also allows a calculation of the five-year forward expected rate of inflation, that is, what the five-year expected inflation rate will be five years ahead.) The figure shows that expected inflation at the five-year horizon was negative at the height of the credit crisis in October 2008. In other words, market participants expected deflation. But the deflation scare was short-lived and inflation expectations were almost back to the levels prior to the crisis by early December 2008. Since the beginning of 2009, inflation expectations have trended lower but have remained positive at the five- and ten-year horizon. Importantly, though, these are only averages. To fully understand the risk of deflation, we need to look at the model’s full distribution of values of future inflation.

The probability of deflation 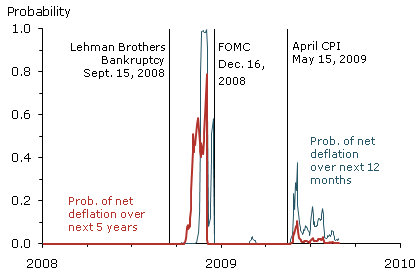 Figure 3 illustrates market expectations of the probability of net deflation over the next one and five years. The deflation scare in the fall of 2008 is clearly visible. On December 1, 2008, bond investors implicitly priced in a probability of net deflation over the one- and five-year time horizons of 98.2% and 79.3%, respectively. On December 16, the Federal Reserve announced its intention to purchase Treasury securities in addition to the mortgage-backed securities it was already buying. This had a dramatic effect on investor outlook for deflation. The estimated probability of deflation at the one- and five-year horizons fell to zero the following day and remained low until May 2009. One interpretation is that investors took it as a sign that the Federal Reserve would use all available tools to prevent sustained deflation from taking hold. Towards the end of May 2009, there was another short-lived uptick in the probability of deflation, probably because the year-over-year change in the CPI then was negative for the second consecutive month with few signs of reversion in the short term.

The effect of deflation risk on recently issued TIPS

The spikes in the estimated risk of deflation since the peak of the credit crisis affect the pricing of TIPS because market participants place a value on the deflation protection these securities offer. To quantify the value of deflation protection, I first calculate the par-coupon yield of seasoned TIPS with sufficient accrued inflation compensation that it cannot be eroded by deflation before maturity. Because they have already accrued a positive inflation adjustment, the deflation protection can be entirely neglected when pricing such securities. Second, I calculate the par-coupon yield of comparable recently issued TIPS without any accrued inflation compensation.

The analysis shows that throughout the fall of 2008 the par-yield difference between seasoned and recently issued five-year TIPS was in the range from .60 to .80 percentage point (60 to 80 basis points). With the decline in expectations of deflation since then, the premium for deflation protection has largely disappeared. It currently is around .10 percentage point (10 basis points) for both five- and ten-year TIPS. Because of this feature, if recently issued TIPS are used to measure inflation expectations, their yield has to be corrected for the value of the deflation protection. Otherwise, there is an upward bias which could wrongly be interpreted as inflation expectations being higher than they actually are.

In this Letter, I have analyzed the inflation expectations reflected in unindexed and inflation-indexed Treasury securities over different time horizons. The analysis reveals that the expectation of deflation is currently small, but was close to 100% at the height of the credit crisis in the fall of 2008. Still, the estimated risk of deflation is high enough to make recently issued TIPS trade at a slightly higher price than more seasoned TIPS. Hence, calculations of inflation rates that would equalize returns on unindexed Treasury securities and TIPS should be interpreted with caution.