Disagreement about the Inflation Outlook

Disagreement among economic forecasters about the future path of inflation has risen substantially since the start of the recession. The nature of this disagreement varies with the forecast time horizon, with some forecasters expecting much lower short-run inflation and others anticipating much higher long-run inflation. This variation may complicate the Federal Reserve’s monetary policy communications strategy.

The recent recession has been exceptionally long and difficult with an unusual degree of financial turmoil. In order to stabilize the financial system and restore economic growth, fiscal and monetary policymakers have taken unprecedented actions. In this extraordinary environment, it is not surprising that forecasters’ views of the economic outlook have shown increasing disparity.

In this Economic Letter, we focus on the increased dispersion of inflation forecasts that lately has emerged among the business economists who participate in the Survey of Professional Forecasters (SPF). Interestingly, the nature of this greater disagreement appears to depend on the forecast time horizon. For forecasts over the next year or so, increased dispersion largely reflects the expectations of some forecasters that inflation may move much lower—likely because this group puts larger weight on the prospect that persistent excess productive capacity and high unemployment will restrain prices over the near term. In contrast, the greater dispersion in forecasts five to ten years out reflects higher inflation projections of some forecasters, which may be due to fears that the Federal Reserve will be forced to tolerate a faster pace of price increases to ease the burden of enormous federal deficits.

These differences in perceived future inflation risks make the Fed’s communication strategy particularly challenging (Bernanke 2009). The Fed needs to convey its resolve to use the tools at its disposal to keep inflation from falling too low in the short term. At the same time, the Fed must emphasize its long-run determination to preserve price stability and maintain the independence of monetary policy from undue fiscal or political pressures. 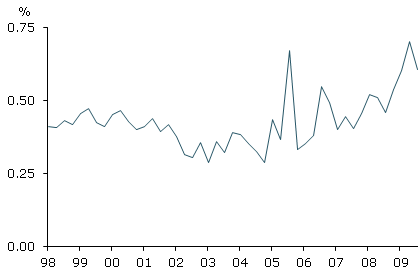 Note: The vertical axis represents the standard deviation of the SPF forecasts for the average CPI inflation rate over the next ten years.

Every three months, the SPF queries economic forecasters about their outlook for a number of economic variables at various time horizons. For example, forecasters provide their expectations of the average rate of inflation for the consumer price index (CPI) over the next one-, five-, and ten-year periods. Of course, forecasters hold varying views of the future, and the amount of disagreement changes over time. Measures of the average or consensus forecast are often cited in the media, but the degree of disagreement among forecasters is typically overlooked. It’s simple to measure the level of disagreement by calculating the standard deviation of the forecasts in each survey round. Standard deviation is the basic statistical technique for computing variability in a sample. As shown in Figure 1, for projections of average inflation over the next ten years, this measure of disagreement has risen markedly of late—essentially doubling over the past five years.

Disagreement among forecasters about the inflation outlook has increased at both shorter and longer time horizons. What is perhaps more important is that the nature of this disagreement varies with the forecast horizon—as illustrated in Figures 2 and 3. Figure 2 shows the median one-year-ahead SPF inflation forecast, the average of the highest 25% of the forecasts (highest quartile), and the average of the lowest 25% of the forecasts (lowest quartile). 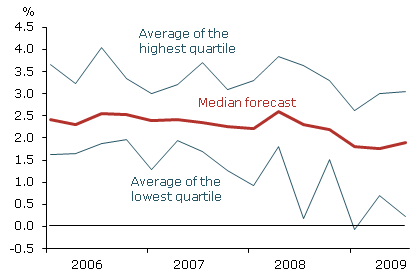 Note: The short-term inflation outlook refers to forecasts for the CPI inflation rate four quarters ahead.

Similarly, Figure 3 shows the median forecast for the average inflation rate five to ten years ahead and the averages of the highest and lowest quartiles of the forecasts. Another simple measure of the disagreement among forecasters in any quarter is given by the spread between the averages of the highest and lowest quartiles (that is, the distance between the narrow lines). By this measure, dispersion in the short-term inflation outlook (Figure 2) increased about 40% over the past two years, while long-term forecast dispersion (Figure 3) increased about 60%.

Still, Figures 2 and 3 suggest different reasons for forecast disagreements at short- and long-term horizons. In Figure 2, the increased disagreement about short-run inflation reflects the fact that some forecasters are projecting much lower inflation than before—that is, the line tracing the lowest quartile of inflation forecasts for 2010 has fallen substantially. In contrast, in Figure 3, the greater disagreement mostly reflects that some forecasters are projecting much higher longer-run inflation five to ten years out—that is, the line tracing the highest quartile of inflation forecasts has risen substantially. Understanding and interpreting the different reasons for disagreement at the short-and long-term horizons—and the nature of the likely inflation forecast risks for those separate horizons—are important tasks for monetary policymakers. 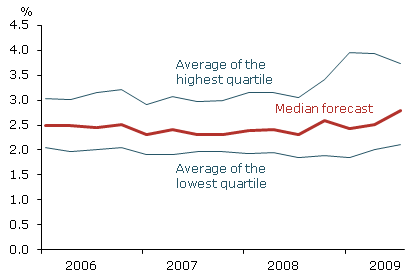 Note: The long-term inflation outlook refers to forecasts for the average five-year CPI inflation rate that prevails from five to ten years ahead.

It is useful to consider the influences that may have led to greater disagreement among inflation forecasters. For inflation forecasts with horizons of less than five years, a key influence is likely the persistent amount of slack in the economy. Although recent data suggest that the decline in economic activity is ending, most forecasters predict that the unemployment rate will remain quite high for several years. For example, the median SPF respondent expects the unemployment rate to average about 9.5% in 2010 and 9% in 2011—little changed from its current elevated level. Furthermore, the level of the unemployment rate relative to its natural or equilibrium level—nonaccelerating-inflation rate of unemployment, or NAIRU—is often considered to be a key determinant of future inflation. For example, this unemployment gap is a key element in the Phillips curve, a well-known model of the relationship between inflation and the unemployment rate (Kohn 2004). The underlying theory behind this relationship is quite straightforward: high unemployment indicates an excess supply of labor, which should be reflected in softening wages and downward pressure on prices. However, the Phillips curve has had mixed success in prediction, so many forecasters largely ignore the unemployment rate and similar measures of economic slack when projecting inflation. Indeed, only 41% of the forecasters taking part in the latest SPF survey appeared to use the unemployment gap in their forecasts. Given the enormous and persistent size of that gap, it seems likely that this minority includes many of the forecasters who foresee larger-than-average declines in inflation over the next few years.

In contrast, at longer-term horizons of five years or more, some forecasters are concerned that inflation will rise, possibly because the Fed may not be able to appropriately remove its extraordinary monetary stimulus when the economy recovers. Moreover, large ongoing federal budget deficits and projections of a ballooning federal debt are stoking fears that the Fed will face political pressure to “monetize” the debt, a process in which the Fed would buy large quantities of Treasury securities, thus boosting the monetary base and possibly sparking higher inflation. For some forecasters, concerns about price stability may have intensified during the current recession due to the close cooperation between the Fed and the Treasury Department in efforts to stabilize credit markets and repair the financial system. This close relationship may prompt some forecasters to question whether the Fed is susceptible to political pressures that could diminish its independence (Hamilton 2009).

However, many forecasters view this scenario as quite far-fetched. They note that, among postwar developed economies, no empirical evidence links large public debt burdens with higher inflation. For example, in Japan, following a deep fall in asset prices in the late 1980s, the central government ran large budget deficits and public debt burgeoned. At the same time, the central bank vigorously boosted monetary reserves. Despite these actions, inflation in Japan has remained essentially zero for more than a decade.

Should the Fed be concerned about this growing disagreement about the inflation outlook? To the extent that the median inflation forecasts remain well anchored over time, as is the case in Figures 2 and 3, the greater dispersion of inflation outlooks may not be so important for the conduct of monetary policy. However, growing uncertainty may cause longer-term interest rates to rise as risk premiums—the extra compensation investors demand for additional risk—increase. For instance, Wright (2008) finds that inflation uncertainty as represented by disagreement about the inflation outlook may explain a substantial part of movements in interest-rate risk premiums. This research suggests that if uncertainty around future inflation is reduced, risk premiums would be lower and more stable, aiding the Fed in achieving its monetary policy objectives.

By highlighting the varying inflation risks perceived by professional forecasters, the shape of the disagreement at various horizons can also be useful in guiding the Fed’s communication strategy. With regard to the longer-term horizon, the rise in inflation fears in the upper part of the forecast distribution dictates that the Fed should continue to stress its independence from undue fiscal and political pressure and its determination to maintain price stability. In this vein, the Fed issued a joint statement with the Treasury Department in March 2009, stating, “While the Federal Reserve has traditionally collaborated with other agencies in efforts to preserve financial stability, it alone is responsible for maintaining monetary policy” (Board of Governors 2009). This message is particularly important because recent research has indicated that central bank independence tends to reduce disagreement about the inflation outlook (see Dovern, Fritsche, and Slacalek 2009).

However, at shorter horizons, the disinflation fears in the lower part of the forecast distribution indicate that the Fed should also strengthen its message that it is committed to forestalling any alarming trend toward much lower inflation. Federal Open Market Committee statements that it continues to anticipate that economic conditions are likely to warrant exceptionally low levels of the federal funds rate for an extended period go in that direction. Such communication is an important element of the Fed’s monetary policy response to the current crisis (Rudebusch 2009).

The level of disagreement about the inflation forecast has risen recently, and the nature of this disagreement varies over the forecast horizon. Concerns about disinflation are increasing the forecast dispersion over the next year or so, while over the long run the rise in disagreement reflects fears that inflation will take off. This horizon-dependent forecast disagreement complicates the Fed’s communication strategy, since alleviating short-run disinflation concerns may very well feed inflation fears in the longer run, and vice versa. Understanding why forecasters disagree over these different time horizons can help improve the Fed’s communication with the public and contribute to achieving monetary policy goals.

Hamilton, James D. 2009. “Concerns about the Fed’s New Balance Sheet.” In The Road Ahead for the Fed, eds. John D. Ciorciari and John B. Taylor. Stanford, CA: Hoover Press.