Predicting Crises, Part I: Do Coming Crises Cast Their Shadows Before?

The enormity of the current financial collapse, widely described as a bursting bubble, raises the question whether the crisis could have been predicted, possibly permitting action to offset its effects. In the first of two Economic Letters on the subject, we look at developments in the United States and find evidence suggesting that simple indicators based on asset market developments can provide early warnings about potentially dangerous financial imbalances.

The ongoing financial crisis has been an extremely painful experience. The unemployment rate is up about 5 percentage points since the beginning of the recession and is widely expected to rise further. Real output has fallen by nearly 4% over the last four quarters, more than any previous four-quarter decline over the postwar period. This is not the first time that a financial crisis has had effects of this magnitude. Among developed economies, the stock market crash of 1929 and the subsequent Great Depression is the first thing that comes to mind. The collapse of Japanese financial markets in the 1990s offers another example. One wonders if something could have been done to prevent these events or at least mitigate the losses.

The last public debate on this issue occurred after the collapse of technology stocks at the beginning of the decade. That debate was cast in terms of asset price bubbles. Many argued that monetary policy should not react directly to stock market bubbles because they are hard to detect. Moreover, even if correctly identified, bubbles can be difficult to deflate without imposing significant costs on the economy. The implication is that, instead of leaning against a bubble while it was inflating, it would be better to clean up after it had burst. (There was general agreement, though, that policy should respond to the effects asset price movements have on key economic variables, such as output, employment, and prices.) But the current crisis has prompted some to reconsider this view. “[O]bviously, the last decade has shown that bursting bubbles can be an extraordinarily dangerous and costly phenomenon for the economy, and there is no doubt that as we emerge from the financial crisis, we will all be looking at that issue and what can be done about it,” Federal Reserve Chairman Ben Bernanke said last year (Lahart 2008).

This Economic Letter takes up some of the issues related to the objection that bubbles are hard to identify, arguing that, while we may never be able to conclusively prove that a bubble exists, some simple indicators may provide evidence that the economy is facing heightened risk of a financial crisis.

The trouble with bubbles

Bubbles involve a departure of market values from fundamentals. Most economists would agree that they are not easy to detect. With equities, for example, it is hard to determine the fundamental value of a stock, let alone the value of the entire stock market. With fundamentals themselves hard to identify, trying to determine whether market values have departed from fundamentals is trickier still. But it is not clear that identifying bubbles is the key issue for policymakers. As Adrian and Shin (2008) point out, even if one were unable to say for certain that a bubble existed in real estate prices, for example, one might still answer yes if asked whether favorable credit conditions could reverse abruptly, with harmful effects on the economy. That is because we know more about how financial institutions react to changes in the market than we do about what the “fundamental” value of a house might be.

Others have pointed out that financial crises can occur even if no bubble exists. Bordo and Jeanne (2002) present a model in which an unexpected slowdown in the rate of productivity growth causes the value of business borrowers’ collateral to fall below what is required to cover outstanding debt. As a consequence, lenders try to reduce the amount of debt outstanding, leading to a financial crisis. Thus, the level of debt outstanding can play a role in determining whether a crisis occurs, and, more generally, in how the economy reacts to shocks (see Bernanke and Gertler 1989).

Unfortunately, it is no easier to determine the right level of debt for the economy than it is to determine whether an asset bubble exists. Instead, researchers have proposed measures that attempt to determine whether credit or other relevant assets are growing too fast or are departing markedly from some easy-to-define reference levels. The logic is that fundamentals tend to change slowly, so sharp movements in asset volumes or values are unlikely to be sustained.

Borio and Lowe (2002) have proposed a measure that builds on pioneering work by Kaminsky and Reinhart (1999). In a multicountry study, Kaminsky and Reinhart showed that it was possible to define thresholds for growth rates of money, credit, and several other variables such that growth above these levels was likely to be followed by a banking crisis. Borio and Lowe use a data set of 34 relatively wealthy countries, looking at three different measures based on asset prices, credit, and investment. They find that the measure based on credit—which they call a credit gap—is the best predictor of banking crises. 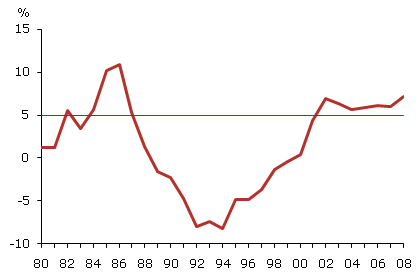 The credit gap is based on the level of credit instead of the growth rate, because Borio and Lowe believe that the level of credit can become unsustainable even in the absence of rapid growth: a not-so-rapid increase in the growth rate of credit, for example, may persist for too long. More specifically, the credit gap is defined as the difference between the current ratio of credit to GDP and a slowly changing measure of the trend value of this ratio. When using this measure, a key issue is determining when the gap has become “too large.” For instance, if we were to use a credit gap of 5% as a threshold and announce that a financial crisis would occur over the next three years whenever this threshold was exceeded, the data sample used by Borio and Lowe suggests that we would be able to predict 74% of the crises that occurred subsequently. Lowering the threshold to 4% would increase the number of crises accurately forecast but would also increase the number of false predictions. Thus, determining what value to use as a threshold remains a matter of judgment.

Figure 1 plots the credit gap since 1980, using annual U.S. data starting in 1955. The credit gap’s value for 1985, for instance, represents the difference between the ratio of total nonfinancial-sector credit in the economy to GDP multiplied by 100 and the trend value of that ratio calculated using data from 1955 to 1985. This credit gap measure has exceeded 5% every year since 2001, though its highest recent value occurred last year. The all-time peak occurred in the mid-1980s, when it stayed above 5% for three years. According to Adrian and Shin (2009), one of the three significant financial crises of the past quarter century occurred in 1987. 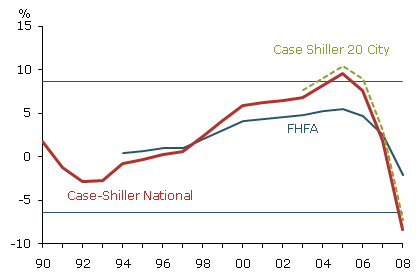 Other studies use asset prices to predict financial crises. Well before the current crisis, Bordo and Jeanne (2002) looked at a sample of 15 high-income countries. They presented measures designed to determine whether given changes in asset prices represented booms or busts. An asset market is declared to be in a boom or bust if the three-year moving average of the growth rate of the inflation-adjusted asset price falls outside a specified range. The width of the range is defined taking into account the historical average growth rate and volatility of the asset price. As before, the exact value of the range is a matter of judgment; here we stay with the range determined by the authors. Bordo and Jeanne look at both stock and property prices, but we consider only the latter. This choice reflects their finding that slightly more than half of all the property booms they identified were followed by busts, while only one out of eight stock market booms led to the same outcome.

Figure 2 shows changes in home prices based on data from the index constructed by the Federal Housing Finance Agency (FHFA) and two indexes constructed by Case and Shiller, one for the nation and the other measuring prices in 20 cities. The national Case-Shiller indexes began to signal that the United States was in a housing boom in 2005, while the 20-city index began to signal a boom two years earlier. Both Case-Shiller measures indicate home prices are now experiencing a bust. By contrast, the FHFA index has not moved into Bordo and Jeanne’s boom-bust range. If one believes that the United States has been going through a boom-bust real estate cycle, this outcome signals the need for further analysis to determine the appropriate width of the range.

Research that aims to improve our ability to predict crises is already under way. For example, in a series of papers, Adrian and Shin argue that it would be useful to monitor the quantities of financial assets in an economy. Traditionally, economists have focused on certain liabilities of the banking sector, such as measures of the money stock. But this is not enough in an era in which nonbank lenders have become major credit-market players. Adrian and Shin present data showing that major nonbank financial institutions boost lending by increasing leverage in good times, and that sharp increases in leverage preceded what they identify as the last three financial crises, which occurred in 1987, 1998, and 2007. The authors also offer statistical evidence showing that fluctuations in the balance-sheet size of nonbank lenders predict shifts in future economic activity.

While the question of which indicators are likely to be the most useful is not settled yet, it is worth noting that their suggestion to focus on financial asset quantities is not particularly radical. Monetarists have always recommended paying attention to them.

Researchers have proposed a large number of indicators for predicting crises, and there is no doubt that some of those would not have forecast the current crisis. And the indicators discussed here could certainly be improved. Incorporating what researchers learn from the current crisis, for example, is likely to help in this regard. The purpose of this Letter has not been to argue that the ideal set of indicators has been found. Instead, we have taken two simple indicators off the shelf and shown that both would have signaled impending trouble prior to the current crisis. That makes it harder to argue that financial crises are, by their nature, unpredictable. And it shows that such simple indicators can be useful, not to fine-tune policy during normal times, but as signals of rising levels of risk in the economy.