The Housing Drag on Core Inflation

Some analysts have raised the question of whether the unprecedented declines in house values, which have been the hallmark of the recent recession, might be artificially dampening core inflation readings. However, a close examination of recent inflation data shows that the weakness in housing costs is representative of a broad pattern of subdued price increases across most consumption goods and services and is not distorting the broad downward trend in core inflation measures.

Measures of consumer prices such as the consumer price index (CPI) and the personal consumption expenditures price index (PCEPI) are closely watched by the Federal Reserve. The focus in this Letter is on the core PCEPI. This index covers consumer expenditures, excluding food and energy, which are used to calculate gross domestic product. The core PCEPI is one of four macroeconomic variables featured in the Summary of Economic Projections published by the Federal Open Market Committee, the Fed’s monetary policymaking body, four times a year.

Core PCEPI inflation has shown a clear downward trend since mid-2008. Declines in house prices have contributed to that trend. However, it is important to realize that house price declines themselves do not directly show up in measured inflation. This is because the price of a house not only reflects the cost of living in it, but also the returns on investment in the house as an asset. The PCEPI aims to capture the cost of living in a house and to filter out changes in house prices due to changes in their returns as investment assets. For renters, the result is that the housing part of the PCEPI is measured by the change in the monthly expense for living in a house or apartment, that is, their rent. For people who own their living space, such rental payments do not occur and thus cannot be directly measured. Instead, the Bureau of Labor Statistics collects data on rents that people pay for comparable living units. These data are then used to estimate the rent that people who own their homes would pay if they were renting their dwellings. McCarthy and Peach (2010) describe the statistical methods used for this purpose in detail. The resulting imputed rent level is known as owners’ equivalent rent and is used in the core PCEPI to measure the cost of housing for homeowners.

Thus, the price of housing in the core PCEPI is made up of both rents and owners’ equivalent rents. The expenditures on these two categories add up to 18% of total consumer spending covered by the core PCEPI.

Core inflation with and without housing

Figure 1
Core PCE inflation with and without housing 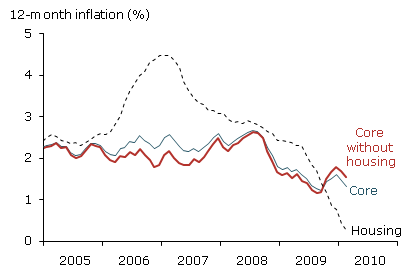 Three things stand out in this figure. First, the standard core inflation measure shows substantial disinflationary pressures at work. Twelve-month annualized core PCEPI inflation has come down from 2.7% in August 2008, immediately before the financial crisis reached a crescendo, to 1.3% in February 2010. Core inflation dipped even deeper during the midst of the crisis, when plummeting demand for consumer goods, especially such consumer durables as cars, electronic goods, and furniture, led retailers to lower prices drastically to get rid of excess inventories. This is the source of the September 2009 trough in 12-month core inflation. Twelve-month core inflation briefly increased at the end of 2009, and has since resumed its downward course. This indicates that the upward move of core inflation late in 2009 was temporary and that the disinflationary trend that started in the fall of 2008 continues.

Second, part of the drop in measured core inflation is undoubtedly due to the deceleration in the price of housing. The declines in housing inflation have been more profound than in core inflation. The 12-month percentage change in rents and owners’ equivalent rents has come down from 4.5% in February 2007, at the height of the housing bubble, to 0.3% in February 2010. This decline in the rate of housing price increases reflects reduced upward pressure on rents, which in turn is due to historically high vacancy rates for rental properties. Because house price inflation is now below core inflation, it drags down the overall level of core inflation.

Third, it turns out that this drag is rather small. The decrease in housing inflation only accounts for a small part of the overall disinflationary pressure on core PCEPI. This can be seen by comparing the core inflation rate with the PCEPI inflation rate that excludes housing, shown in Figure 1. The core PCEPI inflation measure without housing displays a very similar trend to core inflation. From July 2008 to February 2010, it has fallen from 2.6% to 1.6%. Just like core PCEPI inflation, 12-month core inflation without housing temporarily increased after the trough in September 2009 and has started to come down again in recent months. The current difference of 0.2 percentage point between core PCEPI inflation and core PCEPI without housing is not large by historical standards.
Consequently, the evidence in Figure 1 offers little cause for concern that the recent behavior of core inflation might be a misleading signal of the underlying inflation trend. Instead, Figure 1 reveals that, no matter whether housing is included or not, core inflation exhibits a noticeable disinflationary tendency since August 2008. This is not only true for the core PCEPI, but also for core CPI, which is not shown here. For core CPI, the difference between the index with and without the two PCEPI housing components, rent and owners’ equivalent rent, is slightly larger due to the higher weight of these in the CPI. 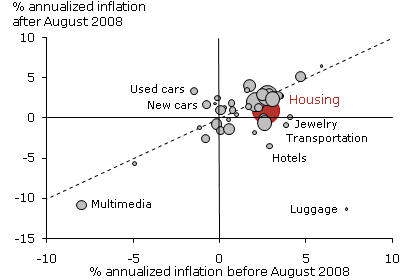 Figure 2 provides more direct evidence in support of the view that the weakness in housing inflation is not an outlier to be discounted, but rather a reflection of a widespread deceleration in inflation during the acute phase of the recession. The figure compares the annualized inflation rates of about 50 goods and services that make up core personal consumption expenditures before and after August 2008.

In the figure, each circle corresponds to a particular category of consumer spending, and the size of the circle reflects the expenditure share of that category. Circles below the dashed line correspond to spending categories for which the average annualized rate of inflation has decreased in the past 1½ years compared to the prior 3½ years. The majority of circles lie below the dashed line, confirming that disinflation has been a widespread phenomenon in the recent period. Moreover, the large red circle that represents housing sits more or less at the center of the picture, close to many other large expenditure categories. This is evidence that the deceleration in housing inflation over the past 1½ years was not an outlier, but rather a fairly typical reflection of broad-based deceleration in core inflation.

Some individual spending categories are worth pointing out. Used and new motor vehicles have been among the goods with the highest acceleration in prices. However, this acceleration was partly due to government support of the vehicle market through the cash-for-clunkers program. With the expiration of the program, it is unlikely that car prices will continue to rise at the same rates.

Public transportation, including airfares, has experienced severe disinflation. Fares have fallen in response to a decline in demand for air transportation and the fall in oil prices since the summer of 2008. The latter is not surprising in light of the evidence in Hobijn (2008) that transportation services have the highest oil share of any category in the core PCEPI.

Several categories with the largest declines in inflation are luxury goods, such as jewelry, luggage, and multimedia equipment. Another group with declining inflation can be classified as highly discretionary spending items, such as hotel accommodations. This suggests that disinflation in these categories in large part reflects very low demand for these goods and services.

Weakness in the housing market has reduced the inflation rate of the housing components of core inflation. Yet, this very substantial decline in the rate of housing inflation has not been isolated. Rather, it is indicative of a much wider decrease in inflationary pressures observed since the peak of the financial crisis. Even if we take housing out of core PCEPI, inflation has come down substantially over the past 1½ years. As a consequence, there is little reason to reduce the emphasis on core inflation as the main gauge of underlying price pressures in the economy. Recent core inflation trends reflect substantial and widespread disinflationary pressures, which, as Liu and Rudebusch (2010) point out, is likely due to a large amount of slack in the economy.

Bart Hobijn is a research advisor at the Federal Reserve Bank of San Francisco.

Stefano Eusepi is an economist at the Federal Reserve Bank of New York.

Andrea Tambalotti is a senior economist at the Federal Reserve Bank of New York.