The Effect of Immigrants on U.S. Employment and Productivity

The effects of immigration on the total output and income of the U.S. economy can be studied by comparing output per worker and employment in states that have had large immigrant inflows with data from states that have few new foreign-born workers. Statistical analysis of state-level data shows that immigrants expand the economy’s productive capacity by stimulating investment and promoting specialization. This produces efficiency gains and boosts income per worker. At the same time, evidence is scant that immigrants diminish the employment opportunities of U.S.-born workers.

Immigration in recent decades has significantly increased the presence of foreign-born workers in the United States. The impact of these immigrants on the U.S. economy is hotly debated. Some stories in the popular press suggest that immigrants diminish the job opportunities of workers born in the United States. Others portray immigrants as filling essential jobs that are shunned by other workers. Economists who have analyzed local labor markets have mostly failed to find large effects of immigrants on employment and wages of U.S.-born workers (see Borjas 2006; Card 2001, 2007, 2009; and Card and Lewis 2007).

This Economic Letter summarizes recent research by Peri (2009) and Peri and Sparber (2009) examining the impact of immigrants on the broader U.S. economy. These studies systematically analyze how immigrants affect total output, income per worker, and employment in the short and long run. Consistent with previous research, the analysis finds no significant effect of immigration on net job growth for U.S.-born workers in these time horizons. This suggests that the economy absorbs immigrants by expanding job opportunities rather than by displacing workers born in the United States. Second, at the state level, the presence of immigrants is associated with increased output per worker. This effect emerges in the medium to long run as businesses adjust their physical capital, that is, equipment and structures, to take advantage of the labor supplied by new immigrants. However, in the short run, when businesses have not fully adjusted their productive capacity, immigrants reduce the capital intensity of the economy. Finally, immigration is associated with an increase in average hours per worker and a reduction in skills per worker as measured by the share of college-educated workers in a state. These two effects have opposite and roughly equal effect on labor productivity.

A major challenge to immigration research is the difficulty of identifying the effects of immigration on economic variables when we do not observe what would have happened if immigration levels had been different, all else being equal. To get around this problem, we take advantage of the fact that the increase in immigrants has been very uneven across states. For example, in California, one worker in three was foreign born in 2008, while in West Virginia the comparable proportion was only one in 100. By exploiting variations in the inflows of immigrants across states at 10-year intervals from 1960 to 2000, and annually from 1994 to 2008, we are able to estimate the short-run (one to two years), medium-run (four years), and long-run (seven to ten years) impact of immigrants on output, income, and employment.

To ensure that we are isolating the effects of immigrants rather than effects of other factors, we control for a range of variables that might contribute to differences in economic outcomes. These include sector specialization, research spending, openness to trade, technology adoption, and others. We then compare economic outcomes in states that experienced increases in immigrant inflows with states that did not experience significant increases.

As a further control for isolating the specific effects of immigration, we focus on variations in the flow of immigrants that are caused by geographical and historical factors and are not the result of state-specific economic conditions. For example, a state may experience rapid growth, which attracts a lot of immigrants and also affects output, income, and employment. In terms of geography, proximity to the Mexican border is associated with high net immigration because border states tend to get more immigrants. Historical migration patterns also are a factor because immigrants are drawn to areas with established immigrant communities. These geography and history-driven flows increase the presence of immigrants, but do not reflect state-specific economic conditions. Hence, economic outcomes associated with these flows are purer measures of the impact of immigrants on economic variables.

The short- and the long-run effects of immigrants 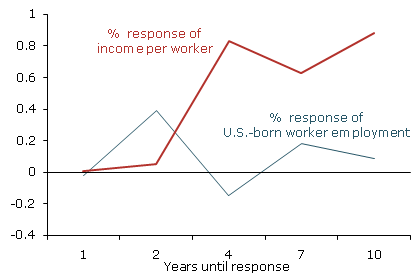 Immigration effects on employment, income, and productivity vary by occupation, job, and industry. Nonetheless, it is possible to total these effects to get an aggregate economic impact. Here we attempt to quantify the aggregate gains and losses for the U.S. economy from immigration. If the average impact on employment and income per worker is positive, this implies an aggregate “surplus” from immigration. In other words, the total gains accruing to some U.S.-born workers are larger than the total losses suffered by others.

Figures 1 and 2 show the response of key economic variables to an inflow of immigrants equal to 1% of employment. Figure 1 shows the impact on employment of U.S.-born workers and on average income per worker after one, two, four, seven, and ten years. Figure 2 shows the impact on the components of income per worker: physical capital intensity, as measured by capital per unit of output; skill intensity, as measured by human capital per worker; average hours worked; and total factor productivity, measuring productive efficiency and technological level. Some interesting patterns emerge. 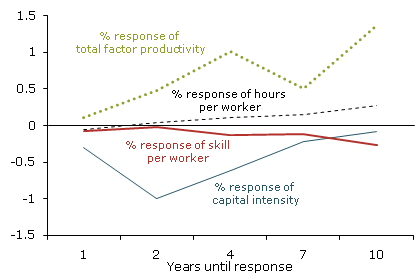 First, there is no evidence that immigrants crowd out U.S.-born workers in either the short or long run. Data on U.S.-born worker employment imply small effects, with estimates never statistically different from zero. The impact on hours per worker is similar. We observe insignificant effects in the short run and a small but significant positive effect in the long run. At the same time, immigration reduces somewhat the skill intensity of workers in the short and long run because immigrants have a slightly lower average education level than U.S.-born workers.

Second, the positive long-run effect on income per U.S.-born worker accrues over some time. In the short run, small insignificant effects are observed. Over the long run, however, a net inflow of immigrants equal to 1% of employment increases income per worker by 0.6% to 0.9%. This implies that total immigration to the United States from 1990 to 2007 was associated with a 6.6% to 9.9% increase in real income per worker. That equals an increase of about $5,100 in the yearly income of the average U.S. worker in constant 2005 dollars. Such a gain equals 20% to 25% of the total real increase in average yearly income per worker registered in the United States between 1990 and 2007.

The third result is that the long-run increase in income per worker associated with immigrants is mainly due to increases in the efficiency and productivity of state economies. This effect becomes apparent in the medium to long run. Such a gradual response of productivity is accompanied by a gradual response of capital intensity. While in the short run, physical capital per unit of output is decreased by net immigration, in the medium to long run, businesses expand their equipment and physical plant proportionally to their increase in production.

How can these patterns be explained?

The effects identified above can be explained by adjustments businesses make over time that allow them to take full advantage of the new immigrant labor supply. These adjustments, including upgrading and expanding capital stock, provide businesses with opportunities to expand in response to hiring immigrants.

This process can be analyzed at the state level (see Peri and Sparber 2009). The analysis begins with the well-documented phenomenon that U.S.-born workers and immigrants tend to take different occupations. Among less-educated workers, those born in the United States tend to have jobs in manufacturing or mining, while immigrants tend to have jobs in personal services and agriculture. Among more-educated workers, those born in the United States tend to work as managers, teachers, and nurses, while immigrants tend to work as engineers, scientists, and doctors. Second, within industries and specific businesses, immigrants and U.S.-born workers tend to specialize in different job tasks. Because those born in the United States have relatively better English language skills, they tend to specialize in communication tasks. Immigrants tend to specialize in other tasks, such as manual labor. Just as in the standard concept of comparative advantage, this results in specialization and improved production efficiency. 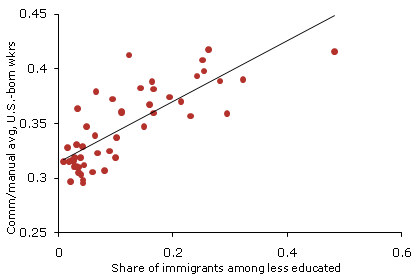 Note: The data on average communication/manual skills by state are from Peri and Sparber (2009), obtained from the manual and communication intensity of occupations, weighted according to the distributional occupation of U.S.-born workers.

If these patterns are driving the differences across states, then in states where immigration has been heavy, U.S.-born workers with less education should have shifted toward more communication-intensive jobs. Figure 3 shows exactly this. The share of immigrants among the less educated is strongly correlated with the extent of U.S.-born worker specialization in communication tasks. Each point in the graph represents a U.S. state in 2005. In states with a heavy concentration of less-educated immigrants, U.S.-born workers have migrated toward more communication-intensive occupations. Those jobs pay higher wages than manual jobs, so such a mechanism has stimulated the productivity of workers born in the United States and generated new employment opportunities.

To better understand this mechanism, it is useful to consider the following hypothetical illustration. As young immigrants with low schooling levels take manually intensive construction jobs, the construction companies that employ them have opportunities to expand. This increases the demand for construction supervisors, coordinators, designers, and so on. Those are occupations with greater communication intensity and are typically staffed by U.S.-born workers who have moved away from manual construction jobs. This complementary task specialization typically pushes U.S.-born workers toward better-paying jobs, enhances the efficiency of production, and creates jobs. This task specialization, however, may involve adoption of different techniques or managerial procedures and the renovation or replacement of capital equipment. Hence, it takes some years to be fully realized.

The U.S. economy is dynamic, shedding and creating hundreds of thousands of jobs every month. Businesses are in a continuous state of flux. The most accurate way to gauge the net impact of immigration on such an economy is to analyze the effects dynamically over time. Data show that, on net, immigrants expand the U.S. economy’s productive capacity, stimulate investment, and promote specialization that in the long run boosts productivity. Consistent with previous research, there is no evidence that these effects take place at the expense of jobs for workers born in the United States.

Giovanni Peri is an associate professor at the University of California, Davis, and a visiting scholar at the Federal Reserve Bank of San Francisco.

Card, David, and Ethan Lewis. 2007. “The Diffusion of Mexican Immigrants during the 1990s: Explanations and Impacts.” In Mexican Immigration to the United States, ed. George J. Borjas. Chicago: The University of Chicago Press.