An unstable economic environment has rekindled talk of a double-dip recession. The Conference Board’s Leading Economic Index provides data for predicting the probability of a recession but is limited by the weight assigned to its indicators and the varying efficacy of those indicators over different time horizons. Statistical experiments with LEI data can mitigate these limitations and suggest that a recessionary relapse is a significant possibility sometime in the next two years.

By now, there is little disagreement that the Great Recession, as the last recession is often called, ended sometime in the summer of 2009 (see Jordà 2010), even though the National Bureau of Economic Research (NBER) has yet to formally announce the date of the trough in economic activity that marks the beginning of the current expansion phase. Intriguingly, just as we seemed to be leaving the recession behind, talk of a double dip became increasingly loud. This recession talk is not confined to the United States. It has crossed the Atlantic to Europe, where the recovery has been even slower, especially among countries on the periphery of the euro area. A quick look at the number of Google searches and news items for the term “double-dip recession” reveals no activity prior to August 29, 2009, but a dramatic increase in search volume since then, especially in the past two months. Such concern is likely motivated by a string of poor economic news. The spring of 2010 saw considerable declines in U.S. stock market indexes, the contagion of the Greek fiscal crisis across much of southern Europe, and a stagnant U.S. labor market stuck near a 10% unemployment rate. It is understandable that the NBER has hesitated to call the end of the recession.

This spate of bad news has prompted a heated policy debate pitting those eager to mop up the gush of public debt generated by the recession and the fiscal stimulus package designed to counter it against those who would prefer to douse the glowing recession embers with another round of stimulus. Domestic and international commentators have engaged in a lively debate on this subject in the press and blogosphere. The New York Times, Washington Post, Wall Street Journal, Financial Times, and Economist have all featured one or more stories about a possible recessionary relapse in the past few months alone. In this Economic Letter, we calculate the likelihood that the economy will fall back into recession during the next two years.

The Leading Economic Index (LEI) prepared by the Conference Board (www.conference-board.org/data/bci.cfm) every month is an indicator of future economic activity designed to signal peaks and troughs in the business cycle. It comprises ten variables that can be loosely grouped into measures of labor market conditions (initial claims for unemployment insurance and average weekly hours worked in manufacturing); asset prices (the monetary aggregate M2, the S&P 500 stock market index, and the interest rate spread between 10-year Treasury bonds and the federal funds rate); production (new orders of consumer and capital goods, new housing units, and vendor performance); and consumer confidence. 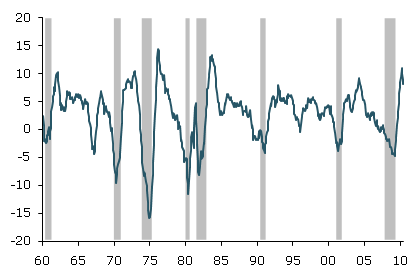 Figure 1 displays year-on-year LEI growth rates against recession periods determined by the NBER, showing the strong correlation between the two. But, in a recent paper, Berge and Jordà (2010) find that the LEI is no better than a coin toss at predicting turning points beyond 10 months into the future, with most of its success concentrated in the current month. Other popular indexes of economic activity, such as the Chicago Fed National Activity Index and the Philadelphia Fed’s Aruoba-Diebold-Scotti Business Conditions Index, turn out to have even less predictive power than the LEI.

At least two reasons explain why the LEI’s predictive efficacy is limited. The first is that the index is a one-size-fits-all weighted average of indicators. By this we mean that weights are designed to distill the information contained in 10 variables into a single variable, rather than by selecting weights that would produce the most accurate turning-point predictions. Second, we find that no single combination of indicators is likely to predict well at every time horizon. The predictive ability of each LEI component varies wildly depending on the forecast horizon. For example, the spread between 10-year Treasury bond and the federal funds rate works best 18 months into the future, whereas the initial claims for unemployment insurance indicator works best two months ahead. Clearly, one should give more weight to the rate-spread indicator than the initial claims indicator when forecasting in the long run, but less weight when forecasting in the short run.

We are interested in predicting a binary outcome: Will the economy be expanding or contracting at a particular future date, given what we know today? One way to summarize the likelihood of each of these outcomes is by taking the ratio of the probability of each. This “odds-ratio,” as it is called in statistics, is equal to one when both outcomes are equally probable, less than one when a recession is more likely than an expansion, and more than one when expansion is more likely than recession. In the context of this either-or condition, the statistical relationship between the odds-ratio and the LEI variables is used to characterize the probability of recession. As an illustration, we use this procedure to predict the probability of recession from 1960 to 2010 using contemporaneous LEI data. These are compared with the NBER recession periods displayed as shaded gray areas in Figure 2. 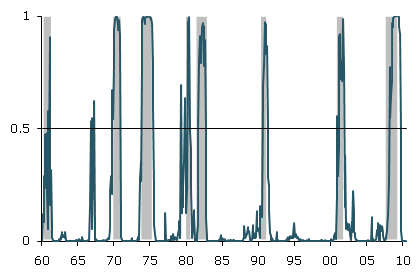 The similarity between the predicted recession dates in this exercise and the actual NBER recession dates is quite striking, but perhaps not entirely surprising. Consider the following rule of thumb: call a recession whenever the predicted probability of recession is above 0.5; otherwise call an expansion. Such a rule would achieve a nearly perfect match with the NBER’s delineation of expansions and recessions, with some slight discrepancy in the mid-1960s. A 0.5 cutoff is equivalent to saying that the odds of a recession are the same as the odds of an expansion or that the odds-ratio is 1.

The odds-ratio and LEI indicator combination addresses the first of the two issues we identified when making turning-point predictions with the LEI, namely the problem of determining appropriate weights for each indicator. The solution to the second issue, the differential predictive power of the indicators at different time horizons, is rather simple. It consists of finding the best combinations of indicators associated with the odds-ratio between expansion/recession outcomes at increasingly distant future dates. Finding the best combination at each month over the next two years generates 24 different combinations of LEI components. Figure 3 uses this approach with data up to June 2010 to display the probability of recession for each month starting in June 2010 and ending in June 2012. The horizontal line at 0.5 coincides with the value at which the odds of an expansion and the odds of a recession are even, making it a natural cutoff for the probability of a binary outcome.

Figure 3
Probability of a recession over the next two years 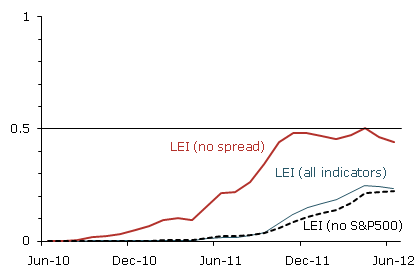 Figure 3 displays the predicted probability of recession obtained using these procedures for three experiments. The first experiment is the benchmark case and uses all ten components of the LEI. It is represented by a thin blue line in the figure and shows that the likelihood of a recession is essentially zero over the next 10 months but that the odds deteriorate considerably over the following year. However, even at its worst, the probability of recession is never above 0.3, so that expansion is more than twice as likely as recession. Paul Samuelson once quipped that, “It is true that the stock market can predict the business cycle. The stock market has called nine of the last five recessions.” Therefore we investigate whether our results are driven by the recent declines in the S&P 500 index. However, repeating the previous forecasting exercise while excluding the S&P 500 variable generates essentially the same picture, displayed by the dashed line in Figure 3.

The last experiment drops the spread between the Treasury bond and the federal funds rate from the 10 LEI indicators. Historically, this spread, which summarizes the slope of the interest rate term structure, has been a very good predictor of turning points 12 to 18 months into the future. Specifically, an inverted yield curve has preceded each of the last seven recessions. However, the term structure may not presently be an accurate signal. Monetary policy has been operating near the zero lower bound to provide maximum monetary stimulus. In addition, the Greek fiscal crisis has generated a considerable flight to quality that has pushed down yields on U.S. Treasury securities. Indeed, the thick red line in Figure 3 shows that omitting the rate-spread indicator generates far more pessimistic forecasts. For the period 18 to 24 months in the future, the probability of recession goes above 0.5, putting the odds of recession slightly above the odds of expansion.

Any forecast 24 months into the future is very uncertain. At two years out, the odds of recession vary from almost three times more likely than expansion, to expansion being almost five times more likely than recession, depending on which LEI components are used. Nevertheless, LEI forecast trends indicate that the macroeconomic outlook is likely to deteriorate progressively starting sometime next summer, even if the data suggest that a renewed recession is unlikely over the next several months. Of course, economic policy can strongly influence the outcome. The policies that are adopted today could play a decisive role in shaping the pace of growth.

Travis J. Berge is a graduate student at the University of California, Davis.

Òscar Jordà is a professor at the University of California, Davis, and a visiting scholar at the Federal Reserve Bank of San Francisco.